The chronology of Anwar's link with the US is voluminous and yet many refused to acknowledge it. The deep sympathy and unjustified belief in Anwar's innocence becomes a challenge to convince that Anwar is a security threat.

They would naturally refute the necessasity to counter Anwar's influence. Nevertheless, it is refutable to claim Dr Mahathir as an American stooge but their words "equally in cohort" uttered means Anwar is one.

The US reaction to Anwar's latest sodomy allegation is a goodsend confirmation. Why is the American so concerned with Anwar? That warning tantamount to intervening in the due process of a criminal investigation and our internal affair? If there is a case against Anwar, will that mean he should be given preferential treatment because the American do not agree?

Anwar is clearly a valuable asset to these Neo-Cons.

It doesn't help that the PM's response is a wimpy direction to write a letter. Reminds me of his response to Lee Kuan Yew's allegations on UMNO and Malays.

Strangely, no newspapers used the American warning as front page.

The AFP report below:

US cautions over sex charges against Malaysian opposition leader

Anwar is being investigated over new allegations of sodomy, Malaysian police said Saturday, the same charge that saw him jailed six years until 2004, when the charge was overturned.

The former deputy premier accused the government of concocting the new sex claims by a 23-year-old male aide and had briefly sought sanctuary at the Turkish embassy in Kuala Lumpur on Sunday, saying he had received threats and feared for his life.

"The main point for us is that the rule of law needs to stand above politics," said Tom Casey, spokesman for the US State Department.

"And we would certainly oppose any use of law enforcement or judicial procedures for anything other than legitimate purposes of the law," he said.

Noting that Anwar had previously faced similar charges and that his conviction was ultimately overturned, Casey said, "So, we would hope that there's not a pattern here.

The new charges erupted after Anwar stormed back into Malaysian politics in March general elections that handed the opposition a third of parliamentary seats and five states.

Since then, Anwar has said he is poised to form a new government with the help of defectors from the ruling coalition, undermining Prime Minister Abdullah Ahmad Badawi, who has faced repeated demands to step down over the polls debacle.

The charismatic opposition leader said the new charges would be "a repeat of the 1998 fiasco" when he was hit with the sodomy and corruption counts that were widely seen as politically motivated.

Anwar said he was targeted again because he had evidence that the police and attorney-general had fabricated evidence in the original sex trial.

Premier Abdullah denied any involvement in the new charges.

"We had no plans to do anything to him just because he says he's made a political comeback," he said.

Malaysian Criminal Investigation Department chief Bakri Zinin said Anwar's aide had personally written the report against his boss detailing an incident at a condominium in an upmarket Kuala Lumpur suburb.

The American pressure during the Reformasi of 1998-2000 was obvious.

Remember the vocal US Ambassador, John Mallot defense of Anwar and his continuous letters on Malaysiakini.com? Then there was Al Gore vocal support for the Reformasi demonstrators in his official speech during the APEC conference in Kuala Lumpur.

Anwar's linked to Estrada can be linked to his current association with Jeffrey Kitingan, PKR's current Vice President. Jeffrey was detained under ISA then for his Sabah cessation movement.

Recently last month, Anwar visited Estrada and on his returned visited Sabah to continue his hype of Sabahan MPs jumping ship to PKR. 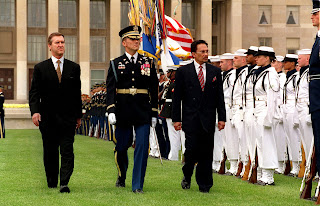 As Deputy Prime Minister, Anwar was given a red carpet millitary honour by US Secretary of Defense, Wiliam Cohen.

It was found out that Institiut Kajian Dasar had on their payroll the American think tank, Asia Pacific Policy Center (APPC), under former CIA man Douglas A Paal. 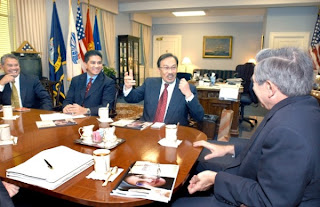 There is the close link between Anwar and Paul Wolfowitz that traces from Wolfowitz's days as Indonesian Ambassador.

Wolfowitz helped Anwar to secure position as Adjunct Professor at Georgetown University, Washington that would enable him to be in Washington.

When as World Bank President, Wolfowitz gave Anwar job as World Bank Advisor and subsequently placed Anwar as Chairman of the US State Department sponsored Foundation for the Future to propagate "US democracy" into Muslim countries.

Thanks America for being a macho cowboy on horseback. Thats enough to nail the final coffin in your planted man's attempt at premiership.
at 7/02/2008 10:27:00 AM

Considering the evidence, eps. the fact that US backed up Anwar about his latest allegations, it is confirmed that Anwar is indeed a puppet for US.
Him to be the next PM will be disastrous.

"The masses have never thirsted after truth. Whoever can supply them with illusions is easily their master; whoever attempts to destroy their illusions is always their victim".
Gustave Le Bon (1841-1931);"The Crowd"

"You're not to be so blind with patriotism that you can't face reality. Wrong is wrong, no matter who does it or says it."
~ Malcolm X

p.s i heard PLah quoted dis aftr meeting DS Azizah.. "...there will be no similar episode under his administration as the Prime Minister"... is he implying dat thr woz a conspiracy on bro AnWar by previous administration?..duh..
PLah in cohort wth AnWar n d neocons no doubt...

That shows how stupid they are.
Who's paying who to do what
Who's getting paid to do what he's paid for!

Check out this old man at http://consumersrighteousness.blogspot.com/. I personally admire his courage and determination to withhold his rights and stand up against one big giant. Won’t it be cool if some bloggers write/comment about his problem?

`Law of large numbers', right?
So Anwar is a political stooge of US. Ladies and gentlemen. Sometimes our ears and eyes do us no favour. It is trick of the eyes and ears, so to speak. It is called magic. The truth is...ask the `magician'.

If Malaysians are so anti US why do we send our minister with a team to seek investors from US? I dont understand the logic. Sorry.

Now, can we chase out Halliburton from Iskandar Development Region?

Or can we finally say no to FTA with US? Or make no more discussion with their defence secretary? Or no more US ship visiting our port?

Wonder who arrange those stuff at the first place?

So now is obvious that Anwar is an American planted stooge. By just some political scene act which is supposed not to be so because sodomy cases are usually caused of individual acts not to be mix with political view. His actions is definitely overboard even now he is making his fan supporters despice of him. I wonder in what of his capability does his fan look inside of Anwar if he is to become the next PM. Pathetic, I could say.

Remember how the US erase and remove Ahmad Chalabi in Iraq?

Here, they will remove Anwar to install Khairy as their man who has been the darling of Singapore a.k.a America's SEA.

Do you know that, Anwar could be the oldest member in Friendster and Myspace? hahaha.

looking at his details;

interested in : Friends ( really??? i would think something else )

Number 1: Telling one own secrets

This Bala is hardly close to both Razak and Najib. Razak had just employed him for specific purpose. Razak as a client, has no obligation to tell all these "details" to justify whatever instructions he directed to Bala. This is clear cut.
These "details" are so critical involving Najib, that one would never revealed to anyone, especially someone you just hired. Does not make sense.

I would imagine Bala's life is in real danger since he appear to know what Altantuya knew. Realistically ( borrowing Anwar's logic ) Bala should have been in hiding in the Turkish Embassy since 2006, right after Altantuya murder. If he knew everything, he should have be C4ed too along with Altantuya. (RPK - read this!) . But hey, he's a hire man to do just what he's paid for.

i l don"t think so that Anwar know that there something simeller have been happen again him,for his struggle, he can told to any person and friend all over the world about what going to be happen to him. if he tell US, it not means he, Anwar are US stooge.