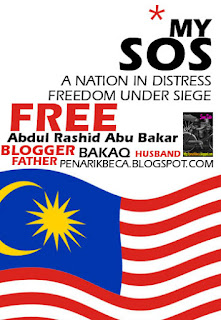 I am writing in solidarity for my brother blogger, Bakaq a.k.a. ~ Penarik Beca, who was detained for questioning following a police report made against him. He is believed to be investigated under the Sedition Act.

Blogger's solidarity transgress my party affiliation and cause. I waited with other bloggers for PKR Nat's release, RPK first time detention as blogger at IPK Dang Wangi and his first court appearance at the Jln Duta court for sedition, and Syed Akbar's court date.

This time around I was handicapped the past few days due to an ailment and could not join other bloggers at the gathering the day earlier and yesterday's evening release.

The reason for Bakaq's arrest and detention is not clear.

There are those that suspect it has to do with one posting that discuss alleged inside police link with gangster BK Tan and an article by RPK on the alleged Israeli link of companies supplying equipments to the police.

There are those that believed that he blew the whistle on the Muzakarah between UMNO and PAS. Coincidently, Bakaq and myself do not believe PAS and UMNO should combine into one party or be together for any coalition.

Posting by Rocky's Bru and Big Dog suggest that he was held for putting up a defaced police crest obtained from Malaysia Today's comment. Bakaq apologised for slighting the police for the crest but stand firm by his posting.

When Rocky first posted possibility that his arrest was due to the crest, I commented below:

I second you bro.

There are worse and worst seditous remark made under the Sedition Act. Why be sensitive over this?

Did what he did translate to any of the following:

3. (a) A “seditious tendency” is a tendency—(a) to bring into hatred or contempt or to excite disaffectionagainst any Ruler or against any Government

(b) to excite the subjects of any Ruler or the inhabitants ofany territory governed by any Government to attemptto procure in the territory of the Ruler or governed bythe Government, the alteration, otherwise than by lawfulmeans, of any matter as by law established;

(c) to bring into hatred or contempt or to excite disaffection against the administration of justice in Malaysia or inany State;

(d) to raise discontent or disaffection amongst the subjects ofthe Yang di-Pertuan Agong or of the Ruler of anyState or amongst the inhabitants of Malaysia or of anyState;

(e) to promote feelings of ill will and hostility betweendifferent races or classes of the population of Malaysia;or

I trust the police to be fairminded.

Respect shd be earned and not forced onto.

In Big Dog's posting, I commented below:

Bakaq loves to do a reverse psychology in his posting. Though we may have different party inclination, which I respect his democratic right, he is a fairly sincere in his writing. This is unlike one famous bloke, who keeps spinning conspiracy.

I find it petty that he be detained for posting a desecrated police crest.

But sensitivity is very much confined to the effected party. And the fact that soldiers defend their flag with their life in battlefield reflects the importance of defending symbol.

Whatever sensitivity that is deemed as offensive, it should be justified by law. If the arm of the law is stretched onto Bakaq, it should be for a genuine and significant offence under the definition of sedition in the act. Otherwise, it would do no good for the police image.

Thus far, it sounds like Bakaq has been taken care off well and treated not in the manner the police has oftenly been exegerated to abuse. I am glad and trust the police in being professional and continue to work to improve their professionalism.

For that, I quote Anzac's comment in Rocky Bru's below:

I'm glad Bakaq has apologised for defacing the police crest. The police are not perfect and have made some monumental bungles but there are quite a few who try to do their jobs well despite what people say. Some actually laid down their lives in the course of their work. Remember Bukit Kepong?. The policemen's family members were also killed then.

Insulting the crest insults their memories too. I'm an otai and I'm posting this because I suspect many of your visitors do not know history and may need to get some perspective especially in these "intersting times."

Dahanistimewa's words in Big Dog's is a good quote to conclude:

To err is human and to forgive is devine!! I think Bakaq is being sincere in his confesion to you. Unlike some who prefer to exegerate his or her ordeal under police custody. Anyway most of the members of PDRM must have forgiven him, but it will not stop the law taking its own course !

Yes, the law should take it's own course without conpiracy theory and unjustified accusation being given the attention.

In the application of the Sedition Act, there should be a priority on genuine and serious offenders, partuclarly those actively instigating the public and causing public unrest by irresponsible questioning of our Constitution and causing the public to lose confidence on the various institutions of this country.

Bar Council's forum to question the Article 121 of the Constitution today is a fine example of such action that has far reaching impact on society. It questions the foundation of this country and serves to instigate inter-religion tension. Thus, I support the protestors demanding Bar Council to end the Forum. If police were to apply Sedition act on the organisers, they have my support.

As one who attended Bar Council's forum on Social Contract, I did not find the Bar Council as sincere in seeking for meaningful and peaceful resolution to societal issues.

The manner the forum panelist were lined up have questionable intentions. All have like minded opinions, thus indicating the Forum serves to reinforce or even propagate their preconceived ideas of law, justice and fairness to the uninformed.

While Ambiga claim that the "Ibrahim Ali"s should come to listen to the forum to hear their point of views, the manner the organisation she led organised the forum to be biasly swayed one way puts to question her sincerity in seeking a resolution to societal problem.

Her choice of panelists like Farish Nor and Dr Kua Kia Soong seek to be rude, obnoxious and outright racist. All but Tommy Thomas were misinforming and deceiving the audience with their misrepresentation of historical fact and analysis.

Ambiga is in no position to preach.

She exposed her inconsistency in the ex-gratia payment to Tun Salleh and other judges. Unlike Karpal Singh that showed some objectivity, she was silence on Justice Ian Chin's remarks which deserve a Tribunal. Matthias Chang exposed her collaboration to use a Foreign Embassy to lobby for certain judges. Her uncle, Judge Gopal Sri Ram extensively lobbied for his big jump from a lawyer to the position of High Court Judge.

Consistent with my past postings, lawyers, as adversarial natured professionals have no business to spearhead to socio-political changes. They are generally hired spokesmen speaking for their paymaster. Thus, can we expect them to be genuine and sincere to bridge the opinion gap?

My answer is an emphatic, No! May I jestfully suggest to "Hang them Bar Council Committee Members!" Seriously, it is time Bar Council to have a taste of the Sedition Act to remind them to be more responsible, exercise more caution and have sensitivity to society in their actions.