BII: The Making of Another AAB Flip Flop 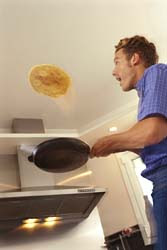 Perasan ... Maybe not likely but that posting caught the attention of Malaysia Today to published it. If it is raised in the upcoming Parliament session, then it actually have caught their attention.

Since the posting, there has been few developments. It seemed likely that Government is trying to address the problem fast enough before the next Parliamentary session which attention grabber Anwar is expected to be there.

Maybank has been under extreme pressure to rescind on the deal and at the same time salvage the RM480 million deposit before this deal turn into another major PKFZ or ECM Libra for this current Parliamentary term. Calls questioning the valuation, and poor timing is growing loud enough.

Talks are that Indonesian regulator, BAPEPAM is willing to give leeway for Temasek to sell down within 3-5 years. Temasek may well be able to keep both their 51% stake in BII and 62% recent jointly acquired with Deutche Bank stake in Danamon Bank or merge the two Bans.

However, it still doesn't mean that leeway can be given for new acquisitions. Maybank acquisition face problem by Indonesian authorities for country exposure to it's banking industry since Khazanah controlled CIMB already controlled another Indonesian Bank, Bank Niaga.

Thus, another Force Majeure condition need to be created and it seemed Bank Negara will flip from it's earlier approval to flop for rejection of the deal based on over valuation.

The subsequent two news report from Business Times provide useful information on the current situation of the Maybank-BII deal.

Early this year, however, Temasek indicated that it was selling its BII stake. Eventually, an agreement to sell the stake to Maybank for US$1.1 billion was announced in March.

Temasek Holdings’ trouble-plagued bid to sell a stake in Indonesia's PT Bank Internasional Indonesia to Malaysia's Maybank holds a significance beyond the deal itself. More than just a transaction gone awry, it also reflects the changing realities facing the Singapore investment company.

The story of BII in Temasek's portfolio, in fact, says a lot about the shifts in its investment history over the last few years.

It will not be too much of an exaggeration to say that the road to Barclays and Merrill Lynch started with two Indonesian banks in the early 2000s. BII was one of the first major overseas investments by Temasek. Back in 2003, Temasek led a consortium called Sorak Financial Holdings, which also included Kookmin Bank, Barclays and Swiss-based ICB Financial Group Holdings, to clinch ownership of BII after reaching an agreement with the Indonesian Bank Restructuring Agency (Ibra).

Sorak paid 1.9 trillion rupiah (S$380 million at the time) for a 51 per cent stake in BII. The BII acquisition came just after Temasek and Deutsche Bank acquired a 62 per cent stake in another Indonesian lender, Bank Danamon, earlier that year.

Until then, Temasek's major investments had been mostly Singapore-centric. So BII, together with Danamon, marked the start of Temasek's overseas investments, as well as the beginning of its investments in foreign banks. Some questioned the acquisitions at the time, while others saw a political motive (buying the two banks, which were distressed entities restructured for sale by Ibra, was seen as contributing to Indonesia's recovery from the Asian crisis).

But there was also a clear commercial imperative: It was a genuine opportunity to buy financial assets at attractive valuations with the potential for strong returns — a theme that would run through to the present time.

Temasek went on to buy over Barclays and ICB's stakes in BII, and is estimated to have invested at least S$455 million in all in the bank.

Then came one of the regulatory shifts that have become all too familiar to Temasek. New foreign ownership rules under the Indonesian central bank's single presence policy, which takes effect by the end of 2010, meant that Temasek had to reduce its Indonesian bank portfolio by half.

Until late last year, the preferred option seemed to be a merger of BII and Danamon to meet the new rules. BII went as far as to say that it was drafting a proposal to merge with Danamon. The two banks complemented each other, said BII president-director Henry Ho.

Early this year, however, Temasek indicated that it was selling its BII stake. Eventually, an agreement to sell the stake to Maybank for US$1.1 billion was announced in March.

What led to the change of heart? First, it could be reflective of Temasek's growing caution, even disappointment, over the Indonesian market. The regulatory shifts and flip-flops in Indonesia, including that involving Temasek's telco investment Indosat, suggested that reducing its Indonesian exposure might be a prudent option.

At the same time, while the financial sector in Indonesia appeared healthy, critics have charged that it was vulnerable to a sudden reversal of fortunes because of the inflow of hot money into the stock market and the spike, until recently, in international commodity prices.

The second factor might hold some irony. If the path to Barclays and Merrill had started with BII and Danamon, then the decision to sell BII could also be traced to Temasek's push west-wards. Temasek's investments in Barclays and Merrill, beginning last year, signified a new global thrust beyond regional acquisitions.

That meant realigning the portfolio, and raising funds for new investments by disposing of existing assets. There could be one more reason at play: the billions pumped into Barclays and Merrill, while undeniably long-term in nature, are currently sitting on huge paper losses. It would be nice to book a profit somewhere, and the sale of the BII stake to Maybank would have yielded a useful S$1 billion, according to some estimates.

Of course, in the neighbourhood scheme of things, Malaysian central bank Bank Negara put the brakes on the deal last month. Apparently, it was worried that Maybank could suffer losses from overpaying (not unreasonable, given that the price is 4.7 times over book) for BII. It is still unclear how things would pan out, but as it is, it is a setback for Temasek.

It is now forced to revisit its options for BII, including merging it with Danamon. And if Temasek continues to put the BII stake up for sale, it is unlikely to fetch a price as high as the one Maybank was willing to pay, given the circumstances. Another lesson in the realities of investing in the region then. No wonder even ailing US and European banks look so attractive.

All eyes on Bapepam, Bank Negara

Some argue more is at stake than the RM480 million deposit that Maybank could lose should the deal not be completed by end-September. Bank Negara's approvals in future deals might be viewed more sceptically, they contend.

Bank Negara Malaysia’s revocation of an earlier approval for Malayan Banking to buy over Bank Internasional Indonesia is quite unprecedented.

Then again, the Maybank-BII deal is unusual in that Bank Negara is justifying its actions based on the sudden policy changes by another country’s financial markets regulator which it deems to be potentially damaging to Malaysia’s biggest financial group.

Adding to the messy picture is the nationality of the main vendor: Fullerton Financial Holdings, a Singaporean financial group.

The impasse in the deal follows the central bank pullback of its approval on grounds that Indonesia's takeover policy change — which makes it mandatory that 20 per cent of a takeover target be disposed to the public within two years of a takeover — could be potentially detrimental to Maybank.

Given that global economies and capital markets are expected to find the going tough over the next year or two, Maybank might be hard-pressed to dispose of BII shares at 510 rupiah (about 20 sen) per share — the price it paid. That, together with impairment charges, could lead the Malaysian bank to suffer losses of some RM3.5 billion, according to some estimates.

Although Indonesia's capital market regulator Bapepam initially indicated that it was not amenable to exempting Maybank from the new policy, it recently hinted at some flexibility in applying its new takeover rules — by perhaps extending the timeframe to between 3-5 years. That's the closest indication yet that a solution to the impasse could be in sight.

Some argue more is at stake than the RM480 million deposit that Maybank could lose should the deal not be completed by end-September. Bank Negara's approvals in future deals might be viewed more sceptically, they contend.

When Maybank first announced that Bank Negara had withdrawn its consent — incidentally, it omitted any mention that the RM480 million deposit could be forfeited until it was asked at an analysts' briefing via telephone — there were pointed comments that the central bank had come to its rescue as the total acquisition of BII at RM8.6 billion or 4.7 times book was seen as too pricey.

Critics of the deal such as the Malaysian Shareholder Watchdog Group put the blame on Maybank's board of directors for the potential loss of the RM480 million deposit, and for over-paying for BII in an attempt to make up for its late start in the regional game.

Although Maybank could prove its critics wrong and deliver on BII sooner than expected, what is perhaps more surprising is the apparent lack of preparedness or contingency clauses in the agreement for policy changes which could affect the transaction.

Indonesia, unfortunately, does suffer from a perception that its policies are sometimes apt to change without warning.

Indeed, this question was asked when the deal was first announced: whether future Indonesian policies could be detrimental to foreign investors? Maybank replied: “There is no reason to suspect there will be any policy changes in Indonesia.”

Now that the changes have come about three months after the agreement was signed — and applied retrospectively — Maybank has been left scrambling to contain the damage.

At this point, Bapepam's softening of its stance and hinting of greater flexibility is encouraging in that it demonstrates that it is prepared to listen to investors and be reasonable in applying new rules and policies. How both authorities cooperate and handle this transaction could either complicate or strengthen relations — but should boost the development of their capital markets.

Reiterating my previous call, was Minister-in-charge for Khazanah and GLCs, Tan Sri Nor Mohamad Yakcop, aware of all these publicly available information and really looked into all these issues?

Why is Tan Sri Amirsham Aziz, former CEO of Maybank and now Minister of PM Depatment's in charge of EPU keeping mum over questions being asked in Parliament.

Will the resignation call by Minority Shareholders Watchdog Group, Dato' Abdul Wahid Jaafar Sidek be heeded? Thats a dicey one. It could bring a new set which are crooks.

With this recent development, it is interesting to ask why Tan Sri Dr Zeti Akhtar Aziz resigned from the Board of Khazanah? The tradition is that Central Bank Governor is always part and parcel of any important Government policy making agency and investment arm.

Did she resign in protest? The excuse heard is conflict of interest. Yeahhh ... sure.

Thank god there are still those like her and those MPs, BN or otherwise, raising such issue in Parliament and creating sufficient ruckus to gain press attention. And, Bloggers too ...?

i do not know the details of Maybank and BII affairs.it's a complicated business thing for me to fathom.but what AAB got to do with Maybank when Maybank itself is a private sector and AAB arent one of the share holders either.

flip-flop is now etched permanently in our Jalur Gemilang.

while the dark blue canton means Malaysian Unity and the colour yellow represents Their Majesties, Badawi has given new meaning to the alternating red-white stripes.

Can't just say that PM is involed directly with the issue. Just because he is MoF doesn't mean that he is the one to be blame for the mess up. One couldn't accuse people based on speculations without reliable evidences.