The Perdana Global Peace Organisation press conference did not get the coverage it deserve. NST made a short news and wonder what page it is placed at. Their report is duplicated near verbatim by China news portal.

The Star only mentioned it under Dr Mahathir's cynical compliment of Wan Azizah. A day earlier, it gave coverage to liar war criminal, Tony Blair strolling at the Penang Butterfly with the picture showing him getting coverage by a UTK.

Strangely, Bernama gave a dignified coverage to this liar war criminal bullshiting about the formation of Abraham House to promote understanding between Christian, Judaism and Islam.

The remarks is an outright display of the ignorance aand bordering on naivety on the Middle East issues which he is attempting to undertake peace initiative through Interfaith understanding.

It seems retired Tony "B-lair" has turned spiritual and spending time with his The Blair Faith Foundation to promote interfaith interaction between Christianity, Islam, Judaism, Sikhism, Hinduism and Buddhism.

Is this "B-liar"'s repentence for his past sin on Iraq? Huh!

With Permatang Pauh by-election coming, keep Foundation for the Future in mind.

"B-liar"'s foundation will be no different!

Where is the claimed openness, Shabery?

However, one can always rely on the sensational British tabloid. Mail Online revealed Tony "B-liar" was on a two week luxury freebies.

Thats not quite correct though. 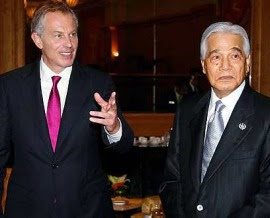 A source present at the lecture yesterday was told Tony "B-lair" worked hard for it. The Sultan Azlan Foundation paid RM500,000 for him to spend the 25 minute to "defend" his action on the Iraq invasion. What a waste?

Rule Of Law Could Be Headache But Has More Good Than Bad: Blair 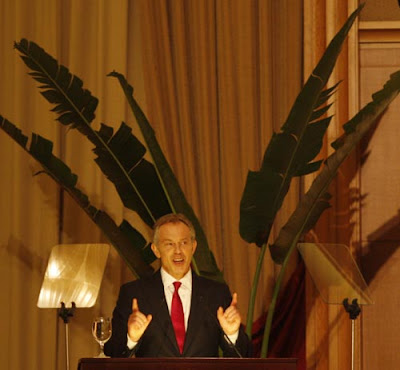 KUALA LUMPUR, Aug 1 (Bernama) -- While abiding by the rule of law could give governments a headache, ultimately it outweighs the dire need for judicial freedom in any state, former British prime minister Tony Blair said Friday.

He said the rule of law ensured that politicians were not above the law and that their actions were governed by the rule of the land.

"Although the rule of law is an initiation of political leaders, like me, it is also a vital component for political success as it ensures an orderly society.

"It upholds the independence of the judiciary and at the same time, upholds fairness of the courts," he said when presenting a lecture entitled 'Upholding The Rule of Law: A Reflection'.

Blair, who was British prime minister from May 1997 to June 2007, said one of the hardest things he encountered as prime minister was not making decisions but implementing the decisions made.

"This is because of the bureaucracy involved. The law comes first. Change may be quicker if it was not the law standing in the way. In the aftermath of the September 11 attacks, we decided to enact anti-terrorism laws but some of these laws ran smack against human rights values, like it was against human rights to prosecute someone forcibly," he told more than 1,000 people who attended the lecture.

He said the British government therefore, took extreme care in drafting its anti-terrorism laws but then again, convicting a suspect under these acts must be beyond reasonable doubt.

The former premier also said that while the rule of law was an important element in the judiciary, judges too, played a pivotal role which was to uphold the fairness of the courts.

"Judges too have a role to play... they must also follow the law. They should never be tainted with corruption. The public's confidence in the judiciary must be upheld at all times," he added.

Blair said a nation could have the best judicial system in place but if the judges of the country were tainted with allegations, then it was still a major problem.

He said there should never be "a delay in justice or justice only for the rich" as the rule of law required clear laws which were fair and dispensed at an equally-efficient pace to all who sought justice.

Didn't my source said he is justifying his murderous action on Iraq?

Pathetic....really pathetic. UM's Faculty of Law has always been controversial with their so called 'liberated ideas'. Be very cautious of this subtle infiltration of the highest order. One world, one religion, one order. Novus Odre Seclorum.