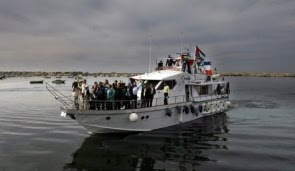 Statement from faizal@peja on board 5:19 pm :

The Malaysian contingent is determined to continue their journey towards Gaza. We are now 150 miles away from the 25 mile line of Gaza and we intend to complete the mission as was entrusted to us by the people of Malaysia.

The Palestinians are in need of the aid on the Rachel Corrie and we will try our best to ensure they receive it.

Rumours that we were turning back to another port are baseless.

We hope and pray that we will be able to succeed and that the international community supports us through this critical time.

Our prayers with you guys!

This SMS came from Shamsul Akmar on behalf of the Malaysians on board MV Rachel Corrie at 3 pm Malaysian time came through a friend:

"Glad to hear about the release of fellow Malaysians although concerned to hear they were not well treated.

Hope we don't have to go through the same ordeal but that choice is not ours.

We are prepared to face whatever situation that awaits us and we are determined to go ahead and carry on with this mission.

Hopefully with international pressure and backing from the various Governments we will be able to go further and be given safe passage to Gaza.

Everyone on board is in high spirits".

The MV Rachel Corrie, one of the few remaining ships of the now-famous Freedom Flotilla, is on its way to Gaza and should reach the exclusion zone tomorrow night or Saturday morning, according to the Irish Times. The boat was supposed to be among the boats that were stormed by Israeli Defense Forces on Monday, but was waylaid in Cyprus by mechanical issues that may have been the handiwork of Israeli saboteurs.

"We don't want to be heroes or martyrs, but we have to keep going ahead," Jenny Graham, an Irish activist on board the boat, told the Belfast Telegraph.

The Irish government has been in contact with its Israeli counterparts, asking for "maximum restraint" when its security forces encounter the Rachel Corrie, Minister of Foreign Affairs Micheál Martin said. "It has been a terrible week in terms of the loss of life and there is now an obligation on all involved to reduce tension."

Statement from RACHEL CORRIE before leaving port on June 1st: 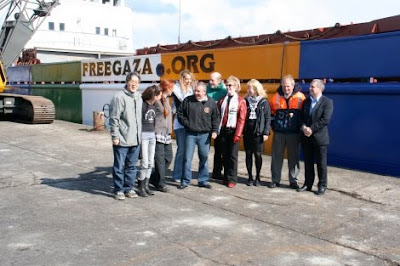 MV Rachel Corrie is now the sole ship of the international freedom flotilla moving towards Gaza.

The Malaysian and Irish peace and humanitarian activists aboard, share their deepest grief and sense of lost with the loved ones of those killed and injured in the illegal action undertaken by Israel on Monday 31st May in the international waters of the Mediterranean.

In the names of our friends, we are more determined than ever to continue into Gaza with our humanitarian cargo and our support for the blockaded and suffering people of Gaza.

We expect Israel to respond to the international condemnation of its violence by not impeding by any means the safe passage of the Rachel Corrie.

We appeal to the international community and United Nations to continue to demand of Israel our safe passage into Gaza.

Jointly issued by:
Malaysians and Irish on Board the MV Rachel Corrie.