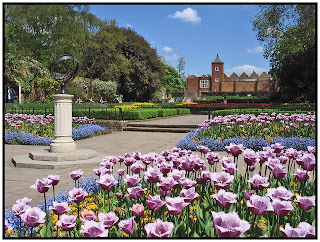 Holland Park is one of the most romantic and peaceful parks of central London
There is a rumour going around that a Malaysian Minister bought an £8.5 million home in the Holland Park, London area. At an exchange rate of 4.78 Malaysian Ringgit per Sterling Pound, that comes up to RM40.63 million.

For that kind of money, no Malaysian Minister can afford such a home based on Minister's salary and allowances. For that Minister to buy such a home, it has to come from sources other than his paycheck. One can only imagine his/her wealth.

The rumour told to this blogger came with a name but there will be no name mentioned. It will be more fun to smoke this Minister out of his foxhole. This means 'spreading this rumour' and watching out for initial reactions.

Let's give our own local bred sleuth solver and mystery hound a crack at figuring out the Minister. Using the available clue, one can start asking question. Move on from there.

First and foremost, let's understand the part of London called Holland Park. Below is an extract from Wikipedia and a suitable map of Holland Park. 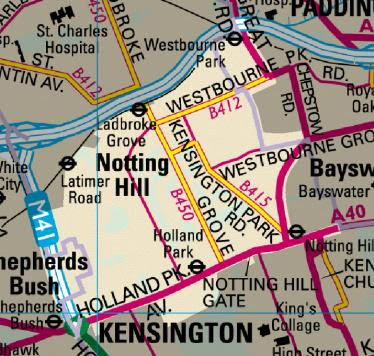 Holland Park is a district and a public park in the Royal Borough of Kensington and Chelsea, in west central London in England. It covers an area of about 22 hectares (54.36 acres) and is considered one of the most romantic and peaceful parks of central London.

To understand the architecture and types of property of this upmarket area, we refer to an extract of the history of Holland Park and accompanying pictures from Wikipedia below: 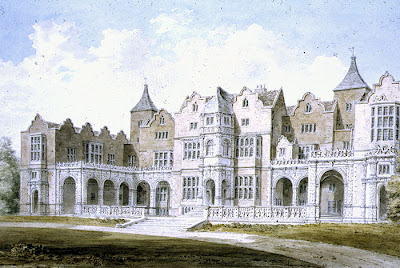 The district was rural until the 19th century. Most of it was formerly the grounds of a Jacobean mansion called Holland House. In the later decades of that century the owners of the house sold off the more outlying parts of its grounds for residential development, and the district which evolved took its name from the house.

It also included some small areas around the fringes which had never been part of the grounds of Holland House, notably the Phillimore Estate (there are at least four roads with the word Phillimore in their name) and the Campden Hill Square area.

In the late 19th century a number of notable artists (including Frederic Leighton, P.R.A. and Val Prinsep) and art collectors lived in the area. The group were collectively known as "The Holland Park Circle". Holland Park was in most part very comfortably upper middle class when originally developed and in recent decades has gone further upmarket. 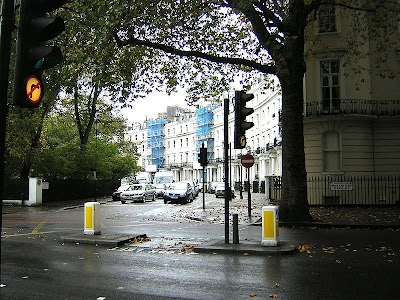 Royal Crescent in October 2009
Of the 19th century residential developments of the area one of the most architecturally interesting is The Royal Crescent designed in 1839.

Clearly inspired by its older namesake in Bath, it differs from the Bath crescent in that it is not a true crescent at all but two quadrant terraces each terminated by a circular bow in the Regency style which rises as a tower, a feature which would not have been found in the earlier classically inspired architecture of the 18th century which the design of the crescent seeks to emulate.

The design of the Royal Crescent by the planner Robert Cantwell in two halves was dictated by the location of the newly fashionable underground sewers rather than any consideration for architectural aesthetics.

The stucco fronted "crescent" is painted white, in the style of the many Nash terraces which can be elsewhere in London's smarter residential areas. Today many of these four storey houses have been converted to apartments, a few remain as private houses. The Royal crescent is a listed Grade 2.

Holland Park is now one of the most expensive residential districts in London or anywhere in the world, with large houses regularly listed for sale at over ten million pounds sterling.

A number of countries maintain embassies here. Simon Cowell lives in Holland Park when he is in London. As does the actress Anita Dobson and her husband Brain May the Queen lead guitarist.

Why is our Malaysian Minister so keen on being in the same neighbourhood with Brian May or Simon Cowell?

That gives a clue of his psyche. Our Malaysian Minister need to flaunt his wealth instead of lying low with his allegedly ill gotten gain.

Unless some financially strapped Sir, Lord, or celebrity had to sell their second or third home at fire sale price, our Malaysian Minister did not buy a large house for £8.5 million.

Then, what will £8.5 million get you in Holland Park area?

We browsed on the website SunSplash Homes. Below are samples available:

Go to the website and it will lead to details of the properties.

Who have been buying and selling £8.5 million property?

For that, we goggled "£8.5 million Holland Park" and picked up snippet of gossips from past Evening Standards:

The Italian fashion designer Valentino is moving to London.

He is spending £8.5 million on an eight-bedroom house in Holland Park close to Sir Richard Branson's home. The classic white-stucco mansion is in need of some refurbishment, according to local agents. Valentino, who dresses stars like Claudia Schiffer (right), Elizabeth Hurley and Naomi Campbell, has his London showroom in Sloane Street. He also has homes in Rome and New York.

SIR RICHARD BRANSON has put his Holland Park home on the market for an estimated £17.5 million.

The house, built in 1860 by the Radford brothers to the specifications of the local landowner Lord Holland, was originally bought as an investment and for Virgin's foreign-based staff to use when in London for training.

Looks like our Malaysian Minister can't have the adventurous entrepreneur Sir Richard Branson as neighbour.

It's a wise and cheap investment for their future.

With the property and pound is going down, in the next few years, the minister will make tons of money.

the question is why the hell is this guy is still a minister.

Voicey
I know for a fact a particular minister has three apts in London. Probably was bought during the UK property slump in the early 90s. My guess is that he sold all three with handsome profit and bought this one.

Voice,
Can you qualify that it is our CURRENT minister and not EX-MINISTER? Ni boleh bukak lesen judi nak teka sapa... hehehe... My 1st bet: Noor M Yacob...; 2nd Noor M Yacob...; 3rd Noor M Yacob... why? he got his hands (dulu, sekarang and...) to the treasury of the country ma!
Kalau ex-minister...mmmm... maybe pak hamid? For his part in delineating Blocks Lah-Mai? Or rafidah? AP queen? Ok I gave up... waiting for your update...

At 80% loan, the upfront cost to the "Minister" will be RM 8 million ONLY! Then, there will be renovation, F&F cost etc.

The total upfront is still to much for a legitimate M'sian Minister.

Then there was that $10 million transfer to London via mamak havala moneychangers by a certain NS MB? Is this related to the "Minister's" Holland Park hideout?

Must be a safe house for him if ever Malaysia becomes like Palestine.

Make hay while the sun shines.

Malaysians are sound investors. Based on the current and projected rate of inflation in Europe by 2020 this house will sell at three times the price paid by the buyer in foreign currency. Speculators like strong currencies backed by determined governments because they know that the economy will bounce back and the currency will appreciate to its old level. The same happened to us in 1997. The RM got develued and then by executive fiat it was fixed well above the value. This is what I think will happen to the Euro and the Pound.

Salam..
If this is true. .then obviously they still have not learnt. In this era, you can never hide anything like this anymore. With Google search, there is no such thing as secrets anymore!

An apartment in that area would cost over a million pounds.

If there was a need, price could have been marked down, with the balance paid in cash!

If found out, there is always the excuse that it was a purchase on behalf of the government, but it had to be done on a private basis to avoid pushing up the price!

MACC should act against that minister.MACC must investigate the leader who involve If you do not mind,please visit and become my follower in my blog http://kalammindamuiz.blogspot.com/.

According to this jala fellow, malaysia will be bankrupt by 2019.

this is strange because malaysia is an oil producing nation and
we are supposed to released lots locked government fixed and
intangible assets to be privatised.

We released the assets [ including the soon to be released sg besi
airport] without adding substantial to our khazanah?

this is truly an innovation on what margaret thatcher's privatisation
concept which brought prosperity to the uk . It was successfully
copied by our southern neighbour.

i am not opposed to the privatisation of the football gaming thingy.

Even as we speak , lots of money are changing hands between bookies

and gamblers. What I found surprising is the cost of licensing

that berjaya had to pay. For a business that is supposed to

than taxes which other business also had to pay.


sometimes one wonder if the mamak shops running the illegal gaming

are better at managing the national finances than minister noormohamad

who cannot be bothered to get maximum returns for the khazanah.


if the licence for football gaming had been tendered , i suspect


so now it looks like that we are going to have a soon to be empty
khazanah and a affluent minister?

I'd luuuuuuurve to know whos house this is!! Hishamuddin ka?

I know rafidah dun haf property in london... she hates that place.

IT is incumbent upon the Prime Minister and the Malaysian Anti-Corruption Commission to clerify.

The good name of the Cabinet and the PM himself must be cleared.

Then again, it's not impossible for a corrupt minister or official to amass much an imperial sum.

That's the reason some of them favour giving contracts to foreign parties, like from China and India.

The reason is obvious.

Kadir Jasin has given a reason as to why they prefer to give contracts to foreign countries, like India and China. I've heard the same said about why at the local authority level too the preference for giving contracts out to the local Chinese !!

lame story i must say here.. i could not be bother whoever own's a property in London or anywhere they could afford. Just hoping that this wealthy people will help d poor.. And we as 'not so wealthy' people could move on to find better life 'dunia n akhirat'.

If it is true it belongs to our cabinet minister whether still serving or retired..he or she is a very corrupt man!!!

No denial and justification..it is corruption! My ears has stopped listening to any denial even if it is `cleared' by any court in Malaysia.!

I would like to exchange links with your site anotherbrickinwall.blogspot.com
Is this possible?