Sime Darby: A Case of Accountability and Selection 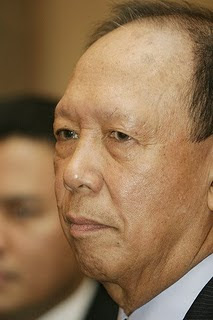 Tun Musa Hitam was asked about calls for him to resign. His answer as reported by The Malaysian Insider was:

Asked about calls for the Board to step down, Musa said he accepted that he and the Board of Directors could ultimately be held accountable for the losses and the forensic audit being conducted by Deloitte and KPMG could implicate the board.

“The responsibility of the Chairman and Board is no different than the prime minister and Cabinet to run a country,” he said.

“Accountability means that a department or ministry that caused a scandal is made accountable. That in the worst-case scenario, the prime minister is accountable. I told the Board that if necessary, the accountability may reach us and to be ready for it. In the government it is supposed to be done but it is not done so often. I will go if I find myself accountable.”

That is an act and statement of a weasel.

This blogger's gut feel is that Deloitte and PKMG is not "could" but "would" implicate the board for negligence.

The Company Act and M&A is crystal clear and without doubt that the ultimate responsibility and accountability lies with the Board of Directors. The Board failed in carrying out their fudiciary responsibilities with duty of care.

It does not take Senator Datuk Musa Sheikh Fadzir to question the Board of Directors' silence from being accountable in Dewan Negara last Thursday.

Is it a case of too many big names unwilling to be shamed for quiting?

He and other board members declined to comment on whether Sime Darby will sue Zubir to recover the losses or if any other officers will be asked to go on leave or if there was any criminal breach of trust involved. They also declined to reveal any preliminary findings from the forensic audit.

They said however that the third phase of the forensic audit is ongoing and is expected to be completed by August after which decisions will be made on what actions needed to be taken.

The Malaysian Anti-Corruption Commission is also involved in investigations and Musa said the Board members have declared that they will make themselves available to assist investigations.

Why was the Board of Directors reluctant to just explicitly inform the public that anyone found guilty will face the law? Simple as that.

It only means to say that no heads will roll and no ass will be drag to the court. Also, it means no one accountable will be made accountable.

How do you expect incompetence, mismanagement, and corruption to be ever eradicated in this country without anyone being accountable for any impropriety?

On another note, there are voices expressing doubt to the choice of CEO selected for Sime Darby.

Although Dato Mohd Bakke Salleh is selected as most relevant by a professional headhunter, there are issues raised about his appropriateness.

Experience with GLCs mean nothing to public spirited members of the public. We have seen many of these much touted blazing guns creating nothing but destructive impacts.

If Bakke has been that good, those things would not have happen would they. So don't BS us with this talk about who he is. We are interested in what he can do now at Sime Darby. While at Tabung Haji I hear what Bakke was fantastically fast at was to secure placements for VIPS to perform the Haj pilgrimage.

Bigdogdotcom, who had a preference for younger, in-house bred and with a clearer plan, Dato Azhar Abdul Hamid, felt:

Former accountant turned Islamic banker Bakke was previously in Tabung Haji, another large palm oil plantation group after Sime Darby and Felda. It was said that Tabung Haji’s cost of operations are not desirable against market forces and both Felda and Tabung Haji have the luxury being GLCs, unlike Sime Darby which is totally market driven corporation. Bakke would probably take a whole year just to learn names and their competencies in a conglomerate that employs 100,000 people and in tough times like this, probably its not the best opportunity to ‘Change horse mid-stream’.

What is worrying is that Bakke is one of those executives hand picked and nurtured by Minister-in-charge of EPU and former Second Finance Minister (at the times of PM ‘Flip-Flop’ Dato’ Seri Abdullah Ahmad Badawi’s counter productive growth of socio, economics and politics bleak interregnum period) Tan Sri Nor Mohamed Yakcop. It doubt that Sime Darby as a Group is able to afford further scandals and ventures that would bring temporary glitch to the Malay controlled corporate scene, such as Khazanah Holdings. This is over 8 million Malay and Bumiputera unit trust holders depend on Sime Darby’s profitability and most of all, ability to fork out cash and pay out dividends.

Is Bakke really selected by professional headhunter or for his Felda connection?

When this blogger raised the selection of Tan Sri Amirsham Aziz as head the NEAC to the selector, the answer received was, "He is a capable person and we feel he will do the job well."

Amirsham had bunggled big time on the selection of the members of the NEAC and his incomplete NEM caused much discord among the people. The selector has actually failed to practise what was said that "pemimpin perlu banyak mendengar."

Many a times bloggers have complained about the selection of top position in Government and GLCs. These are serious "suara rakyat" that is asking the leadership to be more judicious in selecting people into positions of importance. The mistake from selecting of wrong people is difficult to unravel due to reasons of contracts and problems of dismantling what had been decided for the organisation.

The selection of CEOs and Board of Directors should not be made as help for dear old school chum, reward for retired Civil Servants, to quiet down a noisy political rival and jobs for family and crony.

Selection must not only be based on the merit of their resume, but the strategic fit. The background and experience of the CEO must suit the present situation and future challenges of the company. With the leadership and precision of an army general, the CEO is able to harness the available resources to do battle.

This has to be impressed upon because when the selected ones failed, the selector will not be accountable but it is Board of Directors or Committee or headhunters that endorsed the selection that will receive the brunt of criticism.

It is still based on the same principle as accountability of Board of Directors. If one had been the person empowered and decided on the selection, then one has to be accountable too.

Salam Voice,
The flip-flopping virus has infected Musa Hitam & whole SD board... he's now trying to flip-flop his way out of trouble and stay put on the board... very elegant way of flip-flopping! Hopeless case of politician/ex-gomen servant trying to sound and look like a professional corporate guy! How sick can one get than this!?