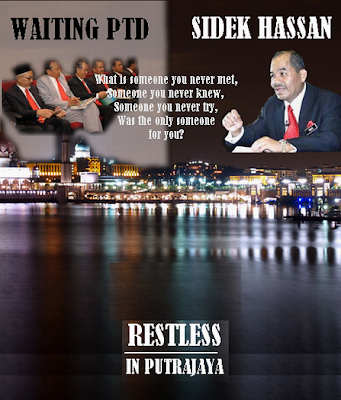 For the past many years, particularly during the tenure of Tun Abdullah Badawi, it has become a practise to extend top civil servant's retirement.

What started as only for special cases during Tun Dr Mahathir's premiership, it has become almost a norm and abused by the pandai bodek ones to remain in the aspired position of power.

In Government service, where seniority matters more than merit, capable Government officers are denied opportunity to serve at the highest level. This practise of giving extension contracts has a demoralising effect on other Government servants on standby awaiting promotion.

It may have contributed to the lower quality pool of officers serving the Government due to pre-retirement resignations.

When our new Prime Minister, Dato Seri Mohd Najib Tun Abdul Razak extended the contract of Tan Sri Sidek Hassan last year as Chief Secretary to the Government for a year to June 23rd, 2010, it created quite hue and cry.

But it didn't attract much attention. However, the recent extension again announcement has caused restlessness in Putrajaya.

Last year, there was accusation cooked up by opposition that Sidek was extended because he hailed from Kg Cherok Paloh, Pekan. No one bought the crony story.

However to-date, after more than a year, Najib seemed apprehensive about undertaking a major cabinet reshuffling to discard the non performers and those of questionable integrity.

It is more discouraging and demoralising to many quarters in Putrajaya now that Najib had announced another extension for Sidek by another year till June 23rd, 2011 in May 2010. 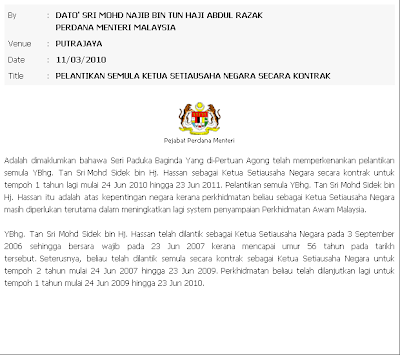 For many years, particularly during Tun Abdullah's tenure as PM, there has been much grouses among civil servants against the practise of extending retirement date with extension contracts.

By this extenstion, Najib may be seen by the Government servants as not listening. They are also rakyat that have learned to expect PM to listen to them.

The extenstion issue is believed by certain quarters as one reason certain segment of civil servants moved to vote opposition in protest in the last General Election of 2008.

Of late, there is an attitude amongst Government servant to refuse instructions and request from Ministers. There seemed to be a tacit agreement among them to refuse cooperation. Civil servant corruption is believed to be on the rise. This will be damaging to the process of governance, which in turn is bad for Barisan Nasional's image.

As Chairman of BN, he should be gravely concern with the rising trend of opposition sympathisers within the Government services. Where Goverment servants in Pakatan states are fed-up with Pakatan State Governments, BN is not able to hold its own fort.

To most Civil Servants, surely there must be other capable individual in Putrajaya other than Sidek. If meritocrasy is not the main criteria of selection, the least they would expect is non performers are not extended.

This is particularly so for Sidek, who in their opinion, carry a perception as non performer and is an insensitive administrator.

Sidek is viewed to have not performed his role in the implementation of the 9th Malaysia Plan. Government process was extremely slow and bureucratic. Rakyat did not benefited and it has affected economic growth.

He is seen as insensitive towards the rakyat on issue of paid parking in Putrajaya and the recent issue of "saman ekor."

Najib should seriously look and address these allegations against his Chief Secretary immediately. Otherwise, Putrajaya may embarassingly be represented by a Pakatan Member of Parliament in the next general election.

If it is possible to put Sidek's appointment on hold, he should explore the option.

However if it is not possible to reverse, since the extension has been graced by Agong, he should seriously consider stopping the practise of extending retirement date of top Government servants.

Appointing people into positions is respectfully the PM's sole prerogative, but voters do not expect any bad repurcussion from any of his appointment.

Taking the case of Sime Darby, appointing the wrong Chairman has caused the company too dearly. Tun Abdullah is responsiblke for that. But by continuing to keeping him there, it is no more his responsibility now.
at 6/25/2010 10:20:00 AM

The Rule with the Public Service and Government Linked Companies has always been "When in Doubt Extend". The "when in doubt" comes in when there is uncertainty on who to succeed.

All DS Najib is doing is simply following this rule.

What is Amusing is that The Leadership profess to enforce KPI blah blah blah. Have these people exceeded their performance level that they have to be continuously extended? or it is a Case of "When in Doubt"?

"Of late, there is an attitude amongst Government servant to refuse instructions and request from Ministers. There seemed to be a tacit agreement among them to refuse cooperation. Civil servant corruption is believed to be on the rise."

The thing is, some of these govt servants refuse to follow the instructions from ministers who are involved in corruption, or the instruction / project to be carried out is 'not transparent'. This should be good for the government.

If those in waiting never get their due promotions because of the bottleneck at the top, many top brains will not join the Civil Service.

In turn, only the no-hopers and brainless will join the Civil Service, reducing it to a very inefficient institution.

The Govt shout retire the top civil servants on the due dates instead of extending their service all the time. That includes IGP, army generals and admirals etc.

dpp
we are all of 1 racae, the Human Race

In the case you mentioned, I would agree but surely that is not what I meant.

What happen was that Sidek gave a blanket circular that all surat sokongan from Minister is not to be entertained.

If it had been for lobbyist of suppliers and contractors, it is fine.

What about surat sokongan to assist the poor and his constituents?