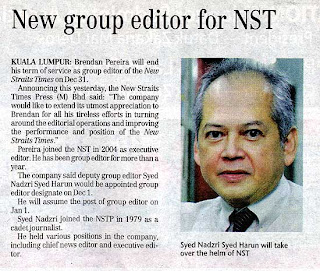 All ears to the Malay voice

Najib is bombarded by all sorts of conflicting voices as he makes his way through the changed political landscape but one voice he cannot quite ignore is that of the Bumiputera Economic Congress.

WHEN the Prime Minister agreed to attend the Bumiputera Economic Congress last weekend, he knew he would be speaking before a critical crowd.

The organisers, led by the right-wing Malay group, Perkasa, had been vociferous in their concern about the future of the Malay agenda and they have been particularly unhappy about the Government’s New Economic Model (NEM).

But Datuk Seri Najib Tun Razak seemed determined to face his critics in their territory.

He certainly had no illusions about what he was walking into, not even when Perkasa president Datuk Ibrahim Ali went down memory lane in his opening speech about how he had known Najib’s late father Tun Razak Hussein.

“When Tun Razak was Prime Minister, I was a student leader. I gave him a lot of problems but he was always fatherly, he would offer me fresh orange juice whenever I met him,” he said to some amusement.

He drew more laughter when he said: “I have known Datuk Seri Najib for many years. I am older than him, he still looks young, but never mind, I am more handsome.”

It was the first light moment after a day of strong opinions and emotional rhetoric on Malay rights.

Ibrahim’s speech had a soft opening but a hard-hitting conclusion.

As everyone knows by now, he ended his speech saying: “Sorry Datuk Seri, the congress today has asked me to tell you that we reject the New Economic Model.”

Last weekend’s Bumiputera Economic Congress was apparently the fifth such meeting in the country’s history. It was organised by the Malay consultative council, a loose alliance of more than 50 Malay interest groups which came together following the 2008 political tsunami.

The gathering definitely did not have the prestige or the intellectual clout of say the first, second or third congress but it was still a very real indication of Malay concern regarding their stake in the national economy.

“You could say it reflects their views and their fears about the country’s economic policies,” said Terengganu-based businessman Datuk Wan Albakri Mohamad.

Their target of attack was the NEM which they fear will do away with affirmative action policies favouring Malays, especially in the economic sphere. During the day-long gathering, speakers had criticised the NEM as sidelining Malay interests and even as anti-Malay.

The NEP was supposed to have ended in 1990. The NEM, unlike the NEP, makes no mention of special bumiputera status.

“The bumiputera agenda is not very clear in the NEM. The basic Malay pillars are not there and that’s why they are confused and upset. Moreover, in the last few by-elections, the Barisan Nasional was seen as giving too much to the non-Malays and yet they lost,” said Kelantanese businessman Juhaidi Yean Abdullah.

While the non-Malays are clamouring for a level playing field and doing away with quotas, the Malays insist the community still needs affirmative action for there to be political stability.

These are the two sides of the coin.

Najib is in a very difficult situation whichever side the coin falls. He is president of a party that prides itself as the defender of Malay rights and culture but he is the Prime Minister of all Malaysians.

The most powerful job in the country is also the most challenging.

He is genuine and determined about taking the country to another level, to inject reform and shift the economy into a more competitive gear. His administration has its sights on making this a high-income nation, to move on from dependency on the oil and plantation sectors to new strategic industries. The NEM aims to take Malaysia in this direction.

But doing the right thing is not always the most popular thing.

Najib’s father was the architect of the New Economic Policy (NEP) and he remains the hero for this group of Malays.

A long banner bearing the image of his father on one end and himself on the other was hung on the stage at the congress. Tun Razak’s image was accompanied by the quote: National unity will be achieved when the nation’s wealth is fairly distributed.

The picture of Najib came with the Malay proverb, “Kemana tumpahkan kuah kalau tidak ke nasi.” It reads as “gravy goes with rice,” meaning that the son naturally inherits the father’s traits.

It was a reminder to Najib not to abandon the legacy begun by his reformist father.

Najib had arrived at the congress gathering with a prepared text but decided to put it aside for an off-the-cuff speech.

And it was a very political speech. He told them of his desire to see Malays rise and prosper and that as the son of the founder of the NEP, he would not betray his father’s legacy or the principles of the NEP.

Then with some feeling, he said that as the Umno president, he would not let down the Malays who form the majority in this country.

Utusan Malaysia zoomed right in with three pages of reports and photographs including a big splash on the front page. It also carried full-page advertorials spelling out the resolutions passed as well as an elaborate advertisement thanking the Prime Minister for coming to their event.

That’s one of the interesting sides of Malays – they criticise you and they also shower you with their customary courtesy.

“There’s no doubt that they want Najib as their leader even if they do not agree with everything that he is doing,” said Juhaidi.

Some non-Malays are asking why he attended the gathering.

“He is the leader of Umno, he has to address Malay concerns. He also went to the Tua Peh Kong temple (in Sibu), he went to Batu Caves, he went for Wesak,” said deputy Kapar Umno chief Datuk Faizal Abdullah.

For the average Malay, the demands of the congress are no different from what the Dong Jiao Zong is demanding for Chinese schools or what Hindraf is doing.

Najib is resolute about the 1Malaysia goal and it is a shame that his detractors, especially those in the opposition, should claim that they want a Malaysian Malaysia yet criticise a policy aimed at instilling the Malaysian spirit just because it comes from the other side of the political fence.

What is the impact of Malay voices such as the Bumiputera Economic Congress?

Umno cannot afford to ignore the Malay voice. Advocates of the congress are more than just Perkasa. They include the Malay intelligentsia and business, cultural and social groups.

If they go on loud and long enough, they can destabilise the Umno leadership.

Or as Wan Albakri put it: “Most of them are part of the Umno family who are afraid that Umno has become less Malay.”

They feel the Prime Minister has made too many grand gestures to the non-Malays. They do not want Umno to take Malay support for granted.

However, said Wan Albakri, they would not quit Umno for another party even if they feel that Umno is not listening to them. They do not see PAS or PKR as parties that stand up for Malay rights. But they may “throw their votes,” that is, spoil their votes or vote for another Malay candidate.

Perkasa’s vocal stand on such Malay issues has upset people including some in Umno who feel that Ibrahim has hijacked a role that ought to have been taken up by Umno Youth.

They said the Youth wing could have helped voice and channel these Malay sentiments in a more contained manner while the top leadership takes on the voice of moderation.

Zakhir Mohamed, a right-wing blogger better known as “Bigdog” is all for the 1Malaysia vision.

“That is a long-term dream for all of us. But to get there, Barisan has to reach the finishing line first. It’s only two more years and Barisan may not get there without Malay support,” said Zakhir.

Najib has to take into account all these conflicting voices as he makes his way through the changed political landscape.

His post-2008 dilemma has been described by some as “juggling 100 balls in the air.”

But said Faizal: “I don’t agree the PM is in any kind of major dilemma. He is not confused about his identity as a Malay leader, he knows what he has to do as PM of a multi-racial country and he has his finger on the pulse.

“It’s just that what he’s doing has yet to reap big results. But he cannot stop, he should keep going,” said Faizal.

Apalah Joceline use this PKFZ tainted chap for quote?

Joceline Tan has presented the economic dilemma of the Prime Minister, which precisely not just the dilemma of the Malays, as Syed Nadzri had described here.

What should a major News Group Editor presumably a professional, well-read and not bodeking the Prime Minister for brownie points look to bring this issue forward? Possible set of alternatives and a solution, perhaps.

Since he is Group Editor and this blogger can't even make cub reporter if he had join New Straits Times, he has to find it on his own. Furthermore he has a whole coterie of reporters and researcher to assist him.

But a hint will be provided.

Syed Nadzri was pissed with Ibrahim Ali's description of Melayu Liberal as traitor to the race. That's the problem when one gets agitated over a statement without clearly understanding what it means. Group Editor shouldn't lose their cool.

That term is something to be explored. It was discussed briefly in the previous blog posting but it's actual term is a keyword to an active intellectual discussion in the academic world encompassing current global economic, social and political state of affair.

In his overeagerness to replace Pak Lah, Najib had given commitment to continue his policies. He was true to his words but he did not realise that Pak Lah undertook a new direction for the country.

It was a philosophical dimension different from our founding father and without getting a national consensus. That became the root of dissension towards him and probably for Najib, if he did not realised and understand it.

If they are not the Malay liberals as said by Ibrahim Ali, why would they be so pissed off?

Off to the International Criminal Court you Israelis terrorists.

Najib have a peculuiar problem since he become PM. Most ministers were Abdullahs cronies. Most of the Khazanahs and GLCs top guns are Abdullah appointees. Even some judges are his appointees. On the other hand Najib faced a chauvinistic voters and the component parties are ineffective or just play by ears, for the benifit of their race; eg The Star belongs to MCA, but acts as if they are part of opposition.

So what should he do? Play inclusive politics, so that UMNO remains as cohesive organisation. Appeal to voters direct personally. Abdullahs appointees ( such as T. Musa and Idris Jala) will be replaced once they are exposed as failures.

I guess this is what is happening. A very slow but long term strategy. Will time and events overtake him, I pray not.