Breaking the Seige: Calls to Action 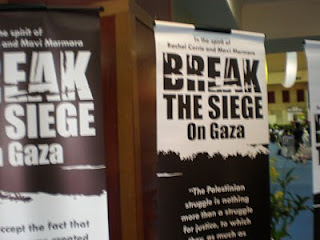 After Tun Dr Mahathir's speech, the participants were presented with eyewtiness accounts of activits on board of MC Mari Marvara and Rachel Corrie.

Prof Michel Chossudovsky, though not on board, presented a staggering account of the behind the scene happening. Read his article on the Center of Globalisation website here.

It was followed after lunch by a session on the life in Gaza. Participants were described of the grave situation faced by the blockaded Palestinian in Gaza daily.

Typical of Malaysian, we usually are impatient lots when it comes to hair spitting deliberation of the issues and constraints. Also typically Malaysian that we are, we tend to delve directly on the question of what's next.

That was the evening session moderated by Dr Mahathir himself. There was the presence of Ambassadors from Turkey, Iran and War Crimes Committee Head to deliberate on a short speech by Datin Paduka Rosmah Mansor, wife to the Prime Minister.

The conference was closed by an address by the Deputy Prime Minister, Tan Sri Muhyiddin Yassin.

In her capacity as one of the major fund raiser for the Freedom Flotilla for Gaza, Rosmah was given the honour to say a few words on future actions that could be done.

In her short but compact speech, she expressed hope that the spirit of Freedom Flotilla and the people who lost lost their lives must live on and inspire others to forge ahead through peaceful means.

Decent citizens of the world must not stop speaking out for the welfare and rights of our fellow men, women and children faced with oppression in Palestine and also all over the world.

Rosmah suggested the first crucial effort would be to open the border crossing to allow humanitarian aids.

She express believe that other aids initiatives like the Freedom Flotilla should be continued. In her view, there is widespread disappointment with the inability of nations and international organisation like United Nation to find an amicable solution for Palestine.

The Freedom Flotilla gave hope and demonstrated that the 'people factor' can make an impact. Through NGOs and inter-NGO linkages, be it local or international, people can make a difference by forming formidable entities that can put pressure on state and international organisations.

Although numerous effort for reconciliation have failed to deliver peace, Rosmah still believe that such initiatives should be continued and supported.

Rosmah suggested that all communication channel be used to express our concern and rally help for the Palestinian cause. The global media, electronic and print, is important to continuously highlight and expose the atrocities committed against the Palestinian.

She called upon Palestinian to seek strength from each other and speak with a unified voice.

In his closing address, Tan Sri Muhyiddin expressed believe that a continuous strategic approach by both state and non state players could be able to break the seige.

In his lengthy historical background of the Palestine, Muhyiddin reminded us that the British promise to make Palestine a national home for Jews was made without consulting the Palestinians.

When United Nations partitioned Palestine into Jewish and Arab states in 1947, the superpower treated as if Palestinian do not exists. The world had watch as though the life of Palestinians was not worth a moment of silence even.

These questions and denials of existence and possession persist till today. With the expansive Zionist network at nearly all level of power in the West and in other nations, there are those that defended or chose to be silent over Israel's atrocities in Palestine.

Muhyiddin suggested that we must strengthen our moral fortitude to tell what is right and correct what is wrong. The world must be made to realise that the Israeli aggression in Palestine is totally wrong and unacceptable.

The world superpower, especially the US can no longer be bystanders. They, particularly their citizens, must come out more strongly against illegal blockade and all forms of Israeli aggressions.

The UN Security Council must resume responsibility in maintaining international peace and security by forcing on Israel to end its aggression and occupation of Palestinian and Arab territories.

On the part of Government of Malaysia, Muhyiddin said the parliament on June 7 2010 have adopted a motion to condemn the attack by IDF on the Freedom Flotilla.

The Government have made the necessary measures to call on members of the UN to demand a full investigation of the Israeli attack.

Through the Emergency Special Session of the UN General Assembly, Malaysia will propose the adoption of a resolution to request the General Assembly seek Advisory Opinion from the ICJ concerning Israel's attack on the Freedom Flotilla and demand Israel's immediately lifting of blockade on Gaza.

Malaysia is in the process of consulting with other members of OIC and NAM to support the resolution.

When asked in a press conference after the event if there will be more such effort, Tun Dr Mahathir gave a reassuring "Insya Allah".

He said PGPO is studying the law of the sea to understand the action of the Israelis. If Somalis capturing ships are called pirates, what then are the Israelis.

That someone who is trying to cover the eyes of the public of his long Zionist and Israelis association, with a spin to link the Government with Zionism by virtue of using an International PR Company, APCO. Putting such person to high office in Malaysia would be a setback to effort by PGPO to help the Palestinian.

Furthermore, that person was a party to the Annapolis Summit that acknowledge the rogue state of Israel and is a close associate of Paul Wolfowitz, the architect of the Iraq invasion and destruction.

By electing him as Prime Minister, it will unquestionably make Malaysia eventually subservient to and become a friend of Neo-Cons, Zionists, and Israel.
at 7/12/2010 05:00:00 AM