Another side to Gani's pilgrimmage story 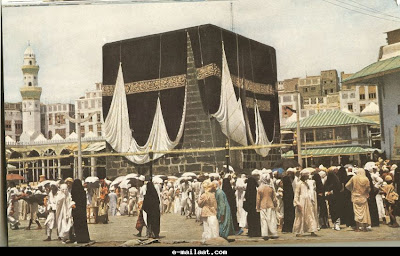 Our source say that it was Rosli Dahalan's sister Farah that leaked about Tan Sri Gani Patail's pilgrimmage with Shahidan.

An anonymous commentator gave a different angle, if you don't mind his casual English:

Tan sri Ghani and family join Zamrud package under Tabung haji. The cost of the package is $65,ooo per person. I think he paid the package from his saving.

No body notice about Shahidan present in the same package until when it was publish in RPK Malaysia Today. Suddenly he started to received a lot of sms condeming him for going haj with Shahidan.

Tabong haji Travel openly apologise to Tan Sri ghani and the CEO of tabong haji admit openly that they are still investigating who take photograpt of Tan Sri Ghani detail including his Hand phone and sent it to RPK.

I dont think this is the work of farah who is link to Rosli Dahlan. Read the posting on RPK.

I think I've read enough of RPK's version on many things.

The commentator felt it had nothing to do with Farah or Rosli Dahalan. It was coincident that Shahidan was doing Haj together with Gani in the same travel package. Our side do not see any conflict of interest by law for Shahidan to socialise with Gani.

Din claim Shahidan is a proxy and he claimed Shahidan was previously charged for taking bribes when he was the OC Secrets Societies in Johore. That is a favourite line of RPK and Din but who are they friendly with if not Ronnie Liu?

If that is the case, RPK, Din Merican and Robert Phang were making up stories to dramatise their false claim of selective prosecution. This fit the common Malaysian perception, but teh question is was there such a case?

Where in the world did Din get the story of MACC request to withdraw case against Rosli rejected by AG? One wonder how a "Prof" in economics and civil service in foreign service know so much to write about organised crime activities and anti-corruption law.

Someone must have told him and that someone must know it well for Din to write. Maybe it wasn't Din who wrote all that?

More suspicion to be exposed.

The commentator continued on about Tan Sri Tajuddin Ramli's issue with MAS:

My guess it was the PM Tun Mahathir who stop Tan Ghani from taking action against Tajuddin considering his sacrify to save Bank Negara from Bankrupt by buying MAS Shares. I agree with you that the Culprit was Tan Sri Noor Yaakop.

I cannot imagine why SC refuse to allow Tajuddin to redeem his TRI (celcom)shares from Danaharta after he sold back his MAS Shares to Govertment.Tan Sri Noor Yaakop instruct Danaharta to sell TRI shares to Telcom Malaysia. Tajuddin not only lost his celcom business to telecom but also lost almost $1 billion ringgit park in Naluri Bhd.

On the Instruction from Noor Yaakom, Danaharta sold Naluri Bhd shares to Atlan owned by George Lim,the man who screw up Bank Bumuputra and Habib bank in the 80under his company Scott Leasing. Ask Dato Raja Aman who was the ceo habib bank then.

I agree with you totally that Tajuddin did not cause MAS lost $8 billion ringgit. In fact MAS never lost that much.It was Noor Yaakop idea by using BinaFikir boy,Rasdan to structure MAS.

That is the main reason why tajuddin sue Danaharta, Azman yahya, CIMB and the govertment for $13 Billion.

YAWNNNNNNNN.....the same shit over and over again.Yeah Pigtail is completely innocent.Blemish free. Angelic.has a halo over his head and what not that you guys spin all the time.YOU CAN FOOL SOME PEOPLE SOMETIME BUT YOU CANT FOOL ALL THE PEOPLE ALL THE TIME.

Anonymous said...
This comment has been removed by a blog administrator.
2:41 PM

Interesting that you miss your own keyword "nampaknya".

Don't play with perception. That is for those who can't think and analyse and easily swayed by emotion and rhetorics.

I share your view as far as those who have conscience.

I know there are people like Azmin who went to haj but is still hiding his biggest sin and betrayal towards the ugama bangsa dan negara!

But his is duit haram.

The only Farah on the TH Travel's Zamrud pilgrim list is Farah Deba bt Mohamed Sofian.

KITA president having an issue with Ghani?