What "the untold MAS story" did not tell? (Part 2) 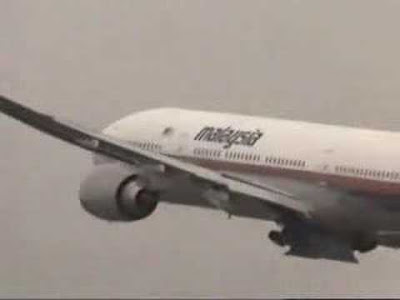 It is time to leave Tengku Zafrul aside for him to figure out whether he wish to have a press conference and explain his side of the story or not. Will this blue blood silver spooned boy dare to not do a Zarinah?

It is also time to put aside temporarily the story of Tan Sri Robert Phang. His resignation serve our purpose of getting the attention. It is time to focus on unscrambbling all his allegations made on the pretext of perception. The Chinaman is in a state of fright and typical of Chinaman, he is busily bodek-ing and bribing to surpress the truth about himself.

Time this blog return back to the What "the untold MAS story" did not tell? series. It is not about saving Tajuddin. Who cares, he made a name of himself and is rich. This is about exposing the mechanic these lying anti-nationals are doing to discredit our national institutions.

All it takes is to remember that Raja Petra and Din Merican are agents and perpetrators of lies and deceit. Din can call this blog a rogue but it is proven on many occasion and frequently that he and RPK have been wronged and caught lying.

In Part 1, the letter from CID Chief Dato Ramli Yusof to Prime Minister Tun Abdullah Ahmad Badawi (or shorter address as Tun Dol which is similar in sound to tunggul) left clues that there is more than meet the eyes - the choice of English used, legalistic style of writing, and the names of people being cc-ed the letter.

The letter to Tun Dol from Ramli Yusoff was dated March 26th, 2007. 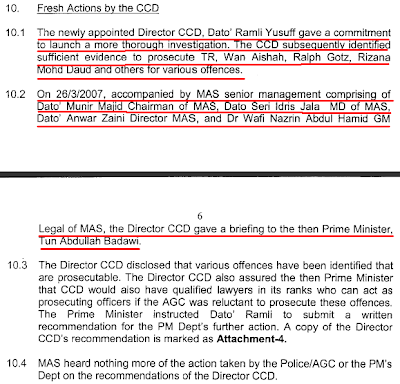 On the same date as stated in MASKargo Managing Director Shaari Sulaiman's memo to the MACC Commissioner dated May 20th 2009 (see above), Dato Ramli gave a briefing to the PM Tun Dol and accompanied by the names cc'ed in the letter - Dato Munir Majid, Dato Idris Jala, Dato Anwar Zaini and Dr Wafi Nazrin.

A week later on April 4th, 2007 was ICC arbitration result which MAS lost. Rosli Dahalan was the lawyer believed to have advised MAS to go for arbitration in Paris. ACL wrote to ICC on October 25th 2004.

Another important date is the promotion date of Ramli Yusof to the position of Director of Commercial Crime Investigation or CCID on May 2005. It was after Abdullah ascension to Prime Ministership on October 2003. 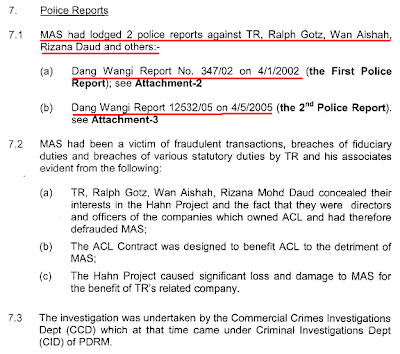 Subsequent to Tan Sri Tajuddin Ramli leaving MAS, there were police reports made by MAS against Tajuddin dated January 4th, 2002. Another report on police report on May 4th 2005, was about the time Ramli Yusof was promoted to CCID. (see Shaari's memo above)

We do not have copy of the police reports but notice that both police reports are about the Hahn project. It is not about Tajuddin losing RM8 billion which have never been substantiated.

By the year 2004-05, the investigation could not come up with anything to pin Tajuddin. It was in police lingo, NFAed.

Actually, there is no such thing as NFA or No Further Action. It is merely a colloquil term amongst police that officially means no more investigation until something comes up.

As one high police official used to tell this blogger, "The Police never close any book until it is brought to court. It is always open to await more information and new leads."

These people - lawyer Rosli Dahalan and MAS officials - had no new leads and information to give the police but was making a wayang out of the stalled status.. 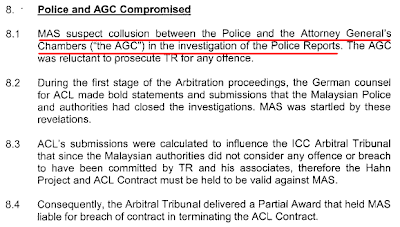 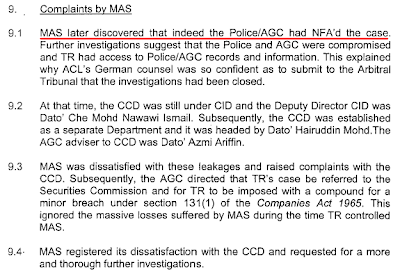 In the same Shaari's memo, MAS claimed to only realised that the investigations had been NFAed around the submission to the ICC.

Here is a big joke!

But in the same memo, Shaari claimed they only found out that police NFA-ed in late 2008 before the evidentiary hearing in the 2nd stage Arbitration proceedings.

When did MAS actually realised the investigation was NFAed?

It looks like MAS realised it many times. By reading Shaari's memo, which is likely to be written by Rosli Dahalan, the realisation that the case was NFAed came at least when Ramli beame CCID and in 2008!

Truth to the matter is there was not enough issue to pin Tajuddin legally.

Our high level police source claimed that the only thing they could found on Tajuddin was small bits here and there like not returning back books borrowed from MAS library as a matter of speaking. Not the many claims in Shahrin's May 20th 2009 memo to MACC.

Off course, the perception and talks is more than that.

The market speculated that Tajuddin made money from commissions from purchases of aircrafts. During his time, MAS was going on a major fleet expansion.

Public suspect that Edaran Computers was fleecing money out of MAS by supplying PCs. Wonder how much do one make from selling a single PC?

The rumour machine was saying Tajuddin was getting away with everything because he controlled the board. But he had only two representatives on the Board of Directors and Government representatives were dominating.

Off course, the convenient answer was Tajuddin has the ears of Tun Dr Mahathir and they fear to oppose him.

That only indicates that most Government representative and Independent Directors are idiots and don't deserve to be there because they cannot protect the party they represent.

If there are proofs and the RM8 billion alleged loss were real, we would have tag along with Raja Petra when he invited us to pin Tajuddin many years back.

To pin anyone, it requires a justifiable story and some fact to back. It can't be written by someone who has got an axe-to-grind against Tajuddin.

Below is the whole of Shaari Sulaiman's memo to MACC to request investigation:

MACC answered back to refuse for reason that the file belong to the police and MACC will not encroach and duplicate police investigation. 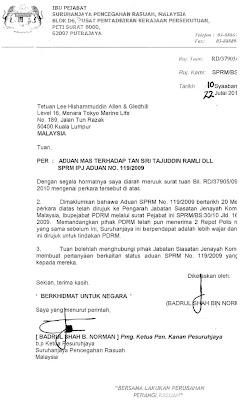 There are few things that need to be realised.

One, Ramli Yusoff and those MAS people met Tun Dol on March 26th 2007, a week before the ICC result on April 4th, 2007 exonerated ACL and Tajuddin with MAS having to pay up. It means they were pre-empting for their loss to ACL and justifying to pursue Tajuddin.

Their justification was the amount Tajuddin wanted was not the amount ACL is getting.

Big deal! Who in the world sue at or less than they should get? Ask their friend, Anwar Ibrahim, who sue every other person the amount of RM100 million for any words wrongly said against him.

Two, the ICC result in favour of ACL and Tajuddin. The ICC Arbitration was fair and even handed. No spin and perception play through Din Merican's blog or hearsay from Rosli Dahalan bullshit all over town could influence ICC. They are not swayed by politics.

ICC had considered and deliberated on ALL allegations made against Tajuddin. This include the content of the letter to Tun Dol by Ramli Yusoff dated March 26 2007 but actually written by lawyer Rosli Dahalan, and content of subsequent police reports, memos, declarations, and appeals to police, MACC, or Attorney General.

It should include these documents revealed by Malaysia Today below:

Rosli Dahalan should have made the strongest case forward to the ICC which was based on Malaysian law. Unless Din Merican claim he is a good lawyer with unquestionable integrity is also another of his lie, Rosli Dahalan would have left no stone unturned. This Singaporean does not need to come out with excuses after the verict. 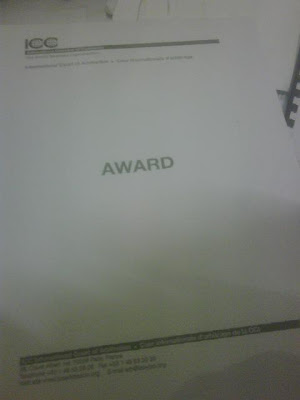 Picture of a copy of the ICC Award is in this blogger's
possession. Compliment of Rosli Dahalan's office ... hehehe
The details can be elaborated but it will bore readers with legal technicality.

The points are available to counter all of the lies and spin in the various memos, police report and letters emanating from MAS, which are of no legal value but merely spin and lies of Rosli Dahalan.

The documents is available and analysed for us to prove that the esteemed Dato Professor Din Merican and Raja Petra are compulsive liar and spinner.

To pun the idiom, birds of the same feather, Anwar and Din must be liars of the same tongue or same breed of Mamak.

Food for thoughts for fellow readers.

Din Merican with input from Rosli had downplayed the ICC judgement. Ponder this: why didn't MAS appeal the judgement by ICC?

What we have come to know is Rosli and MAS lawyers had not properly briefed the MAS management, Government and all stakeholders. Instead they are playing wayang such as linking Ramli Yusof corruption charges with investigation of Tajuddin and making accusation that Shahidan Shafie help closed the MAS investigation.

Raja Petra and Din Merican (with Rosli Dahalan allegedly behind) had spinned that Ramli Yusoff was victimise and charged for corruption and abuse of power because he reopen the file of Tajuddin Ramli. They were using also the lembu Robert Phang as a dumb loudspeaker. Why?

Wait for the next one as we reveal a high level conspiracy involving the MAS official, a Pak Lah sahabat, Rosli Dahalan and police officials. Together to be revealed is Rosli Dahalan's motive.

Promise to be a bomber like many other bombs we have exploded before in this blog. Police and MACC should start to look into.

Let's hope that Ramli Yusoff visits to meet IGP Tan Sri Ismail does not sway things and the law is allowed to takes it's own course without any "film directors" directing wayang and doing perception play behind the scene.

you better make sure it's a bomber with fact and not another din chicano & raja gila drama minggu ini.

Interesting article; enlightening. Small correction if you don't mind: "ex-to-grime" should read "axe to grind" meaning to have a selfish reason for saying or doing something.

Anonymous said...
This comment has been removed by a blog administrator.
11:47 PM

dol said...
This comment has been removed by a blog administrator.
8:24 AM

(posting ni tak publish pon takpe)
Lu memang cekap la voice...
Deservingly you are among the elites..
Biar la kalo datuk Sak panggil korang 'assasins' . Orang2 macam ni memang patut kena tembak sampai mampus.....Remnants of Tun Dol's running dogs especially KJ and his 4th Floor boys.
Now that being said..can you comment on the following report sometime back..( starbiz 20/1/2011 - Khazanah on the home stretch)..
"As at the end of last year, Khazanah's overall portfolio's realisable asset value (mark-to-market) stood at RM113bil, up more than two fold since the change efforts back in 2004. In terms of performance, the fund's net worth adjusted (NWA) has also risen by 125% over the same period, resulting in a CAGR (compounded annual growth rate) of 13% per year.

From a headcount of 30 when Azman swooped into the hot seat of Khazanah in 2004, the fund today has a staff strength of 370 and growing.

Azman should have been elated to reveal these numbers at an annual review of the fund's performance over the week, in stark contrast to two years ago when it must have been unnerving to announce that the fund suffered a 20% drop in RAV and 36% decline in total shareholder return in the hands of the global crisis in 2008.

The “blip” in 2008 had led the Fund's portfolio to swing back to square one as some of the companies namely Malaysia Airlines, Axiata and UEM Group in its stable needed to top up their capital."
From a close associate of Tan Sri Nor..he is keeping silent and just letting the performance record speaks for itself... is it really?
Your take please...or just ignore if you find all this irrelevent.

The overall performance of Khazanah with all those strtagic investment is not my concern.

What happen to Khazanah's socio-economic role?

These are indicators of some systemaic problem within Khazanah.

Perhaps, the authorities should investigate MAS overseas assets sold, as in asset stripping.