A gay Minister in Cabinet and Johorean ... 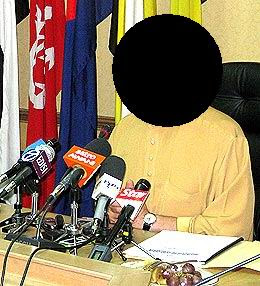 Looking at the progress at Jalan Duta, there will be a prima facie case against Anwar Ibrahim and he has to prove himself as innocent.

Anwar is up against DNA forensic evidence and Saiful steady testimony in court to be supported by the three doctors that attend to Saiful, other witnesses and the CAMERA.

He will need to prove he has alibis to claim he is somewhere else. Can he proof the camera wrong?

Can his six alibis show they were around with Anwar when the camera proves otherwise?

Anwar is set for Bamboo River. Sodomy is a crime punishable by imprisonment.

Back in 1998, Tun Dr Mahathir dismiss him from Cabinet on a justifiable reason of moral and indecent behaviour before Anwar was brought to trial.

Will Najib dismiss a member of his cabinet if found to be gay?

Dato Seri ... as far as we can remember, this talk have been going on for more than three years.

There is a Cabinet Minister from Johor that is in the habit of going out socially with pretty young boys to restaurants and nite clubs in Kuala Lumpur and Johor Baru.

The can see this.

Source from his UMNO Division described him as intimately close with his Political Secretary, described as jambu by fellow youth member in the Division.

The Minister could be seen as touching the thigh of his Setpol and massaging his neck and shoulders with soft sensuous touch that made those witnessing uncomfortable.

One reliable source claim that there is a particular pretty boy that is particularly close with the Minister.

They pretty boy used to work at a corporate affair department of a major Bank in Kuala Lumpur but have moved to an International Invesment company.

The source claim to personally view an intimate telephone conversation between the 20 something former bank corporate affair officer with the Minister on the other side of the conversation.

The source verified the handphone number at the receiving end.

The conversation was intimate as they talked about indiscreet subject like performing the mandi wajib. The pretty boy was so close with the Minister that he could request for RM20,000 with ease.

The pretty boys revealed to our source that he used to meet the Minister at Nikko Hotel. He had laid bare his body to massage the Minister.

But the source's story stop short at the interesting part.

There will be no names revealed.

In case, anyone is guessing as Dato Seri Hishamuddin Hussein because this blog used to call him pondan for his indecisions at MInistery of Internal Affirs, our answer is No.

It is not Hishamuddin.

The story is already much talked within UMNO Johor. Don't tell me Najib doesn't know. In case he doesn't, he should get this investigated.

If Anwar had to face many ordeals for his criminal sexual orientation, this Minister can't stay on. He could be a major embarassment to Najib's transformational cabinet.

Morality must never be set aside.

We don't need a gay minister in the Cabinet. Just chuck him out a.s.a.p.

Another one who likes pretty boys like Anwar Ibrahim is a No No!

there's only 2 minister from johor in our cabinet.
one from pasir gudang division and one more from and one from sembrong.
if what u wrote is true I as a reader only have one option to choose....

In Malaysia, Umno judges will course find a prima facie case against Anwar. In UK, the Judge would have already thrown out the case.

Why? Alleged to be sodomized and only two days later go for medical checkup. The multiple DNA profiles found in Saiful's arse could have been Anwar's or Najib's or Rodwan or Pet the Uncle or Najib's aide. There is reasonable doubt man.

Secondly, the hospital proforma prepared by the examining doctors state, 'attempted sodomy' and 'resistance to this attempted sodomy'. The prosecution went to town objecting this proforma to be given to the defence.

So, only in Timbuktu, defence will be called.

Malaysia today published more damaging allegations of Gani Patail with his friend Vincent Lye. Now we know who has been telling the truth.

stay out of foolishness

stay out of foolishness

Johorean politicians are invincible. Nothing happened to Chua Soi Lek who went on to become MCA boss. So expect the same.

Wow, this is news man. I am a Johorean and quite active in politics (not in the mainstream).

Any clue folks? Not Hishamuddin! We have Tan Sri Muhyiddin, Dato Seri Khaled Nordin and who else? Quite a number deputy Ministers but here we are talking about a Minister.

If we were to extend to Timbalan Minister too, there will be Dr Latiff, Datuk Puad Zarkashi, and Datuk Razali Ibrahim.

Only god know who is the guy !

I hope it is not true..If it is true ..god help us all..he is the minister of higher education. The teenagers are all under his care

I read your comments which i take to be most complimentary. Since it is intended as private communication between you and I, I have chosen not to share them with others in this blog. I am glad that you are one of the defenders of Mahathirism. Regards, Din Merican MALAYSIA DJ BLOGGER.

Din, when you blog it’s no longer private and it’s not a compliment from me either but a penghinaan and an attack to your personal character and intergrity by me.

I suggest you share my nasty comments about you with the other’s.

I’m ready to be attack by all the fool’s and idiot’s including you.

I dare you Din Merican.

DIN MERICAN, today i pronounce you as DIN MERICAN “THE LALANG BLOGGERS”.

We are just releasing comments.

It does not mean we agree or confirm any of the guesses.

No names will be divulge.

People no longer give a damn whatever/whenever BN minister screwed, always the truth even if it's half the truth. Only an idiot could believe DSAI doing all those nonsense, only in Malaysia the case is still alive. DSAI video has zero proof value to the court. Come on people!! Look at Chua Soi Lek video!! How he remains a minister is so bizarre.

Does it rhyme with Mujahidden?

you better answer the photo as revealed by your fellow orang muo.

your credibility now is at stake and please don't change the topic yet.

WTF reputation is on the line?

Do you people read the original source (which is this blog) or listen to secondary sources (which rumours and speculation from other source)?

There will be no names revealed.

In case, anyone is guessing as Dato Seri Hishamuddin Hussein because this blog used to call him pondan for his indecisions at MInistery of Internal Affirs, our answer is No.

It is not Hishamuddin.

I am not emotional but a bodoh comment does not deserve polite reply.

I'm of the opinion that God simply create UMNO in order to finish this world. At the end of time, UMNO makes all things Halal.....

The Anti-Christ (Dajjal) would not come into existence if no devil around....

Please someone confirm whether this statement is true?

"Rumour has it that his press secretary by the name of Natasha is so influential that he can get the Minister to appoint key posts at the universities. Now it makes sense why the Minister listens to him."

It doesn't matter who. Krismuddin or otherwise. It has been almost a week and there is still blackout on this news. SO I BELIEVE IT MUST BE TRUE!

what the fish? or write the future?

he is an enemy of the people,

therefore, they must remove him from cabinet.

a naysayer like him, shall be banished under akta ordinan darurat 1969

ha ha ha why so serious?

Remember , World is Watching You

That is really easy.. i used to work with Crown Regency at Jalan P.Ramlee, KL at reservation counter. Why not just check this very cute guy by the name Shakir Affandi, the exact time he checked-in, room no., and check the cctv at that particular time, hall way to the room... good luck.

Salam bro. Does it rhyme with KJ? Is it KN?

Hi Anonymous,
It is now 2018...can I take you back to one of your comments made in 2014 about a cute guy name S***** A****** coz I think I know this guy. After the new government took over, the guy is now appointed as a Special Officer to a lady Minister. With the new full Cabinet now in place, if any male Ministers are interested in cute guys.....my guess is, this S***** A****** will be willing to jump onto his lap anytime!!!