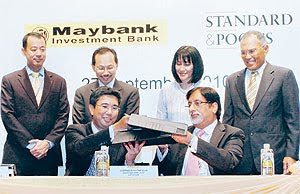 This is no longer the days of snail mail, newspapers, and line calls. It is too long to hear no response. One can consider what happened as the truth.

Since his remark was published in Malaysiakini, the blogs have been making an issue out of Tengku Zafrul's remark, pro or con. The latest Harakah gave a frontpage coverage.

Zafrul's silence inspire us to post something here to put the disparage of information and murmuring into perspective.

Suddenly he got my neighbourhood breakfast kaki to awake me from my short sleep because he wants to meet.

I only begin to sleep after doing my subuh prayers and was only having minimal sleep the night before. To hear Zafrul wanting to meet me, it just made my day.

Zafrul is stalling and avoiding the press by trying to meet privately so that things will hush hush down. He is doing a Zarinah. She had a Deputy Minister instruct us to meet her and her husband.

He doesn't pay me salary to order me around. No one does!

Zafrul should hold a press conference and state his stance. I want to hear him criticise organiser Idea and Pemandu.

And he has some more than 13 years of story to explain.

I am being brutal.

The reason being ... why didn't he responded when I attempted to meet him to hear his side of the takeover of Avenue by ECM Libra back in 2006?

It is payback time.

I am not interested to meet and hear his explanation privately now about being misquoted and his claim that he has video proof of being spinned by Malaysiakini.

Six days has passed, damage has been done and he is now for public domain, even if mainstream news did not picked it up. There is a public campaign against him picking up steam.

A source said he was in Bangkok all these while. What so important for him to be in Bangkok when he messed up some other people's name?

we must initiate a campaign to oust him MUBARAK Style but in cyberspace.. this bugger tak pernah BERSYUKUR.. do you know that this bugger tend to ignore all the BUMI ENTERPRENUER when they apply for financial assistance with a reason = not qualified enough..

I think it is time to BURY all those BERUK's crony and proxy..

He claimed of being misquoted and and has video proof of being spinned by Malaysiakini?

If that is the case, why the hell does he need to see you? He might as well write to MAlaysiakini and ask them to retract or hear from his lawyers.

However this Zafrul boy thinks that the others are lesser mortals and that's why he can say anything he likes on the pretext of being professional. Ironic isn't it?

If he is so professional in his conduct, he will be going through the mill just like the other successful corporate figures had. Being parachuted into where he is today will not do anyone any good. Perhaps the most sensible thing that Najib should do is to send him as CEO of RapidKL, then there is no money for him to play with or brag.

With that, he will fall into oblivion in no time.

What Zafrol said was truly factual. Isa is not fit to hold any important position.

He is a comical man and is just fit to be a Raja Lawak.

Who the fuck Zafrul thinks he is making statement whether others fit to be the CEO of Felda or not? Even if TS Isa is not fit 100%, what right does Zafrul has to open his big mouth in the first place? Misquoted my ass!

Who the f.. he think he is? he is part of the 4th floor set up with Khairy, Kalimullah, Brandon Pereira and other Singapore operatives.

Whack him properly. don't let him go. Do a Robert Phang on such 4th floor crony. This bas..d must be thought a lesson that the 4th floor era has long gone and KJ is a good example where no one gave a damn about him.

Blue-eyed silver plattered boy. Didn`t your parents teach you enough to show respect to the elders, whoever they may be.

Kerana mulut (celupar) badan binasa. Time for your head to role. Najib / Maybank should put him on the chopping block.

Btw, you are not even fit to head RapidKL. TBS @ BTS nay. Bas Mini Wilayah maybe.

May be, just may be.... Robert Phang is sending him in to tame you down.

Bro,
He directed u to meet him.....ooh man , who going to pay yr RON.....hehehhhe! hes another one MUSA HITAM bro!

The Internet is the bane of many people who relies on disinformation to stay in power.Egypt,Tunisia and many other countries all over the world will have to walk through the gauntlet. It is therefore important that politicians in the seat of power realize that there is more need for integrity when giving handouts from the gravy train..(?)
There is less need for transparency as the 'truth' will be grouted out by interested people.
Your expose on this character tz is a good example on how the those in power view the rest of malaysians..stupid,ignorant and clueless.
Politicians are nauseating people especially when you have to see them on the news day after day..mother fcukers with the frozen smile.But we need them because in the process of staying in power they make the country run. ( the opposition are worse )So we need more politicians with a tiny weeny bit of conscience and do a Singapore dance

Sorry we won't in fringe in to his private space.

We only reveal his public side.

Bro, wa tabiklu.
Keep it up.

Since Zafrul is a chicken shit, he pulled in his buddies into Maybank - Azamin Salleh and Badrul Hisham Abu Bakar which are now in Maybank Investment Management Sdn Bhd. The interesting part is those two clowns came for Maybank interview before Zafrul's appointment and were rejected BIG TIME. But now, they are running the fund management outfit of Maybank Group. Obviously, someone is abusing his power, Malaysia style.

The CEO, Azamin, even created a new position in the company - Chief Transformation Officer (CTO) for Badrul. The existing staff are not happy (of course), even few are eager to leave Maybank as this Badrul guy is well-known in the market for being a real JERK. Go ask his ex-colleagues at Bank Islam Fund, Tune Money, Avenue, HLG and Commerce Asset, you will not get any positive feedback from everyone, including the tea lady. He came late to office everyday, read newspaper all day, prefer long lunch, and play golf or go karaoke with broker during office hour (GRO included!). I'm not gonna write about his favourite past time with Zafrul, i.e weekend rendezvous at Alexis in Jakarta...... a high class brothel house!!!

Is this the kind of CEO that will bring Maybank into a greater height? If Wahid is not careful enough, these jokers will bring him down, for sure!

Cheah Teik Seng was appointed as a Director of Maybank on 26 August 2009. He serves as a member of the Audit and Risk Management Committees of the Board.

As a federal government Public Services Department scholarship holder, he served in the civil service in the early ‘80s. Since leaving government service, he took on various roles in the banking and financial services industry both locally as well as in London, Hong Kong and Singapore. He held positions in Public Bank, Chase Manhattan Bank, Merrill Lynch, Goldman Sachs, UBS and BNP Paribas holding the position of Managing Director for a tenure of nine years. He was appointed as CEO-designate of ECM Libra Avenue Group in 2006. He is currently a Director and partner of Aktis Capital Singapore Pte Ltd.

NUR SHAREHOLDERS TO EXPOSE E&Y, ZAFRUL, KALI
International financial service firm, Ernst & Young, might end up with dirt on its face if claims by Northern Utility Resources Sdn Bhd's major stakeholders on the firms actions are proven to be true.

Two of NURs shareholders are scheduled to hold a press conference soon, after obtaining documents that show that E&Y's agents at NUR deliberately didnt inform the stakeholders of an offer by national utility, Tenaga Nasional Bhd for an independent power purchase agreement. NUR is under receivership, with E&Y as the receiver manager.

A board meeting is scheduled this week, and sparks are about to fly. The year 2008 hasn't been a good year for E&Y. In January, the STAR revealed, nobody knows for sure where some RM37 million of Multi-Code Electronics Industries Bhd (Multico) money is. E&Y were the external auditors, but Multico, opted to appoint Azman, Wong, Salleh & Co to carry out a special audit on its accounts.

A recap, NUR provides and bills execlusively for the Kulim Hi Tech plant. Recently, Tune Money's Tengku Zafrul, in which ECM's Kali is a partner has been linked in trying to take over the company, via back door moves. Little birds tell me, that in Johor, they are also looking for a company to provide and bill for an exclusive high tech park. It would require, a company with experience to handle it.

Note, EY is also the auditor for EDEN Bhd, which used to make food for a living, but now are big in power.