The case of a conniving PTD officer As a PTD officer himself, he used to tell us that the British assisted to establish the PTD as the pillar of Civil Service. They were trained to be efficient and thorough administrator imbued with impeccable integrity and right values and carries themselves as true gentlemen.

With finance and banking as our profile, one personality that epitomise such administrators would have been the former Bank Negara Tun Ismail Ali. Others, we are not closely familiar.

That may have been so sometime ago. However, times may have changed.

The Malay's foray into corporate business saw many civil servants tagging along for the opportunity as businessmen or company directors. Their colleagues' sudden wealth and good fortune changed their values and attitude as professional administrators.

Those still in service become greedy, corrupt and conniving. Self interest rules the day. Maneuvering and manipulation refined to an art form.

A recent event shows how disgusting and conniving these PTD officers sitting at the top of Ministries food chain could be.

Early in the month, a group of bloggers as initiated by a few were whacking on former TV3 head honcho, Dato Farid Redzuan. See here and here for samples.

Frankly, we have no issues with bloggers whacking of Farid.

This is the guy who was spending time bodek-ing Tun Abdullah and particularly his late wife, Toh Puan Endon that he did poorly in his job as a Government backed media. Heard he is diligently bodek-ing Datin Seri Rosmah, which we hope is smarter than that, to fall to his complimentary words.

That is Farid the kaki bodek. If he had been a sexy secretary, he would have fellatio-ed his way to the top of his organisation.

But does he deserve to be whacked on this occasion?

It seems that the bloggers were irritated by his negative comments on pro-UMNO bloggers in his presentation to Cabinet. Some bloggers have this ego as though they or the blogging "profession" can't be criticised.

Understandably most socio-political bloggers are volunteers contributing to the party or cause. We reckon it's hurtful when efforts and dedication are not appreciated.

It turns out that Farid did not say those negative words. As blogger Big Cat said, Farid was merely focusing on the wide performance gap between government-owned RTM and stations run by privately-owned Media Prima and Astro. 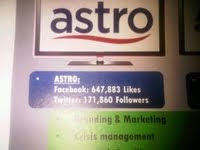 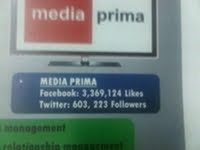 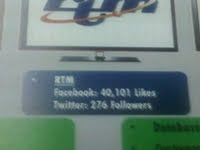 There were leaked pictures of the presentation in the blog, The Benchmark here.

It turns out that someone from the Ministry of Information was trying to protect their turf by pitting bloggers and social media practitioners against Farid.

What the batu api fella did not realised was that Farid made a private presentation to the Prime Minister, Dato Najib Tun Abdul Razak. Subsequently, Najib suggested he make the same presentation to the Cabinet to initiate discussion to draw out some ideas to improve the situation.

The fella could have only heard of the presentation in the Ministry's post Cabinet meeting and reacted badly. Instead of addressing his Ministry's sagging presence in the social media, he decided to shoot the messenger; not realising that he had shot the PM. What an attitude?

The Mole has a good account of the event here. 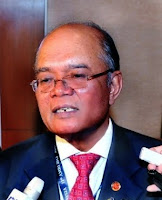 Rocky here refuted that the fella was the Minister, Dato Rais Yatim himself doing such dirty maneuver. If he had been Rais, Rocky would have whacked him harder.

Who would have been the fella that attempted to sabotage or "menangguk di air keruh"?

Even though Rocky had not revealed it here as the KSU, Dato Seri Kamaruddin Siaraf, we would have guess it. By tracing the bloggers who wrote it, one can guess who it was. But we already six sensed it as him from the very beginning.

It is simple. Incompetent people or those whose got something to hide are usually secretive and insecure.

There is nothing to be ashamed that RTM lags behind Astro and Media Prima. Obviously private TV stations will do better than RTM, but why the need to be insecure and shoot Farid.

We've touched on him here in a posting way back on October 13th 2010 when Rais instructed his attack dogs at us.

Below is a recap of what we wrote:

One petty but sizeable abuse that this KSU did was to hold his Hari Raya Open House at the Ministry's expense at his home in Kuala Pilah some Rayas ago.

At one time, he was said to have an affair with a newscaster in which both naturally denied. Nevertheless, such rumours involving top Government Man is bad for any Ministry.

We'll save the big ones after the general election because by then we'll just send the files to MACC.


In the meanwhile, we need to have the Ministry's publicity machinery up and running for the election. We can't afford Little Napoleans like the KSN, DG for PSD and this KSU tying red tapes around everyone and stifling Government machinery.

Heard his retirement is coming up in few months. Make sure his contract is not renewed! 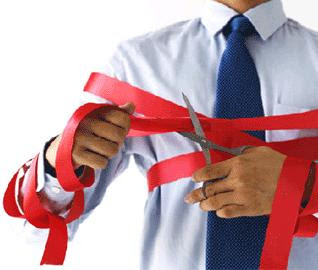 Make sure MACC enter after the general election. That should stop any more of these kind of PTDs from doing more monkey businesses.

Najib should consider making the appointment for MACC head under Parliament and free MACC from the grasp of PSD like the position of Attorney Generals and Auditor General position.

That way there will be no PTD manipulation of MACC to shield them from getting busted.

Lastly, in case Dato Seri need to retrain your rather pathetic cybertroopers for the election, you know how to contact me.
at 3/11/2012 09:35:00 AM

heard his contract would be renewed and that his influences also affected operations at certain news agency. perhaps you sir would like to do some digging about his connection with certain gm.

Quote "In the meanwhile, we need to have the Ministry's publicity machinery up and running for the election. We can't afford Little Napoleans like the KSN, DG for PSD and this KSU tying red tapes around everyone and stifling Government machinery."

That itself calls for EC to investigate immediately.

Bricko- alamak, we thought you would come out with the whole story. This is nor even one third- and an old one la! We can see whats going on ,dont have to heap the whole blame on the KSU.Who's the most powerful of them all that even Rocky's given up nailing him? Rocky knows its 'tak berbaloi' , because that power got even more powerful backing.

Its not even all their fault. Its a policy fault? That RTM is used to promote PM Najib 100 % and along the way the minister too get to promote himself. SO the public axis is the PM and the Minsiter in charge. Thats good bec that at least have been effective- making PM number 1. But convincing only for the rural and suburbans. The not good thing and more destructive thing is people still dont know the govt and UMNO or barisan nasional well enough to put all thier hopes there. The many good things thats being done by done by other leadears are lost .

People dont know that there r other capable good leaders doing good things, who are being drowned by these excessive attention on everything being done by PM- and the minister ,unless mentioned or propped up by the PM.

In a way the objective of putting PM on a pinnacle have succeeded. But it also succeeded in people being turned off by the minster in charge - because of how the minister is being promoted and used by his people.Therein lies the weakness of the minister's army of advisers and officers because the promoting is not base on the minisiter's strength.He may b old timer but he's got his strength for sure, otherwise how come hes still there.

The downside of it is that people know the PM like he's your friend, but he's only one man, standing for election in one place . He can only be in some places at same time to promote others. That in itself checkmates the strength and work put in by hardworking candidates.

Tv stations have failed to promote the Prime Minsiter's wife the right way. She is a good source to approach the people. She has her own strength too and she's a qualified professional.Since she shows interest in wanting to commit herself to engage the public- why not use this intelleigently so that its a plus point.

SO far govt and private media have gone overboard only to succeed to make her look a monster. So all faults are heaped on her.Where is the team of PR and govt and private sector professionals whos' suppose to take care of these things too.

Its sad that they have unwittingly allowed and supported, unknowingly, the diluting of the PM's wife credibility.And this becomes a burden to PM. All the critisms and cruel jokes and parody heaped at the PM''s wife is worsened by the rubbish way tv stations n govt social media counter this.

Can true professionals come forward to help them! Now please.

THE MOMENT IS COMING.