The last time we saw 'nyai' 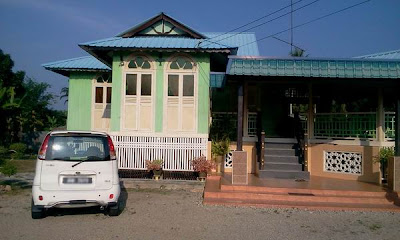 The rumah pusaka of 'nyai', from great grandfather to now with her bongsu child
'Nyai' or grandmother in Javanese, passed away last Friday, March 23rd 2012 at 6:00 pm.

Her age is still being disputed among us. The official age is written as 88 with an asterick* indicating the exact age is not actually known.

My mother is 72 and the eldest living child. But she has a brother above her. If 'nyai' was married off at 16, which was the marriageable age those days, her age could fetch in the high 90s.

It is sad that she will not be part of our Hari Raya eve routine, our marriage ceremonies and various family ceremonies, and our periodical balik kampung to look-up our parents.

After she had grown old and weak, she could only perform ceremonial role as head of her family and the bigger family as last surviving member of the 'grandparent' generation. 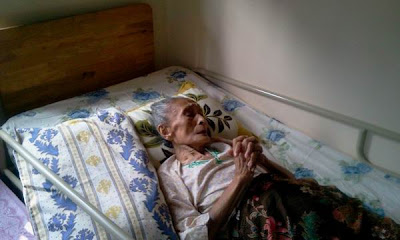 She couldn't sit anymore. All she could do was lie in her bed. We were dreadful of the fact she will get pillow rashes from lying all the time.

When we visited her before Haj, she could still sit together with us to enjoy breakfast. That was really our last real conversation with her.

That last visit was indeed touching. One of the aunty had alerted everyone to visit her. Without a moment delay, we went back.

One could sense that her time is near. Of late, she had been talking about meeting my grandfather, her parents, my father, her late son and those who left earlier than her.

She couldn't remember who we were. In fact, she thought we were my mother's new husband. My father died in 1983.

The words may be odd to others but this has been her usual line for the last year or two.

This time with her body more frail than ever, it was her last.

As far as we can recall of our 'nyai', she is not actually pious or knowledgeable on Islam but she reads the quran and fast dilligently. Only the past few years did she stopped from her infamous marathon fasting from Rejab stretching Syaban, Ramadhan and to the 2nd to 7th day of Syawal.

She is such a peaceful woman, never at odds with anybody. Unlike me as the eldest grandchild who was spoilt by the affection of our grandparents, we should be the one to seek her forgiveness than otherwise.

We will miss her.

Grandmother was a good listener. Not that she will solve your problem. She was merely someone one can talk too. Someone to subconsciously vent our frustration of our obstinate and strict disciplinarian parents.

We will miss her cooking. Her unmeasured and unwritten recipes of lauk and kueh will go along with her. She must have made the world's best kueh koci and gudir (two layered traditional jelly). Once tasted of hers, others' will be too inferior to even try. 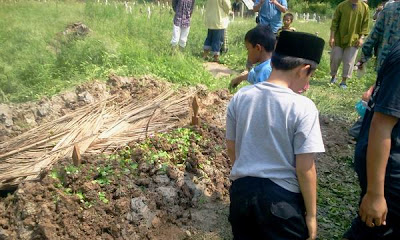 A 'cicit' spreading 'daun pandan' and 'bunga mawar' on 'nyai''s final resting place
While we are sad, we are equally happy. Never have we saw someone so ready to return and meet God. She had only return to her rightful place near God.

May God give peace to her soul.

On personal note, I never get sad over people's death. To me, death is just a final pit-stop, where you go to sleep, before judgement day comes.

Quran said that death is like a quick sleep before people are awakened for judgement in front of God during judgement day. 'Quick' because when you die, all physical dimensions, including the dimension of time, disappears.

Sincere condolences to all your family.

May your beloved Grandmother rest in peace and receive God's blessings.

Nothing last in this world.