Musical Dedication: Another One Bites The Dust


This is rather late but still relevent:

Tan Sri Zarinah Anwar, who has been chairman of the Securities Commission Malaysia (SC) since 2006, will retire when her term is completed on March 31 this year.

Both currently serve as SC managing directors, and their new appointments take effect from April 1, 2012.

Zarinah has played a key role in strengthening and developing the Malaysian capital market over the past ten years, ...lancau lah 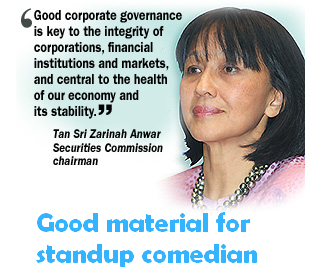 Sincerely, we hope Dato Ranjit is not as arrogant as Zarinah. If he is, we know what to do.

Zarinah refused to engage the media, old and new, and on an occasion, was responsible for SC's high handed dealing with the press. We were at war with her back on this [read here].

In addition, we could not appreciate someone, who deviously used a back channel using a "Minister", to pressure and influence us. 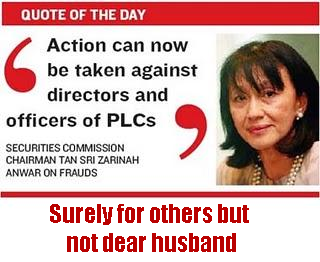 Believe me, she was not as ethical as many in SC perceived her to be.

Read Syed Akbar here on Sime-E&O and Isyoda. It was our past article on Isyoda and the failed Shah Alam hospital here that placed the radar in her direction. There is also the suspicious Tenco and ECM Libra here.

If you had read the links, you should repeat my remark "lancau lah!" too. There is too many suspicious and questionable deals. Even without any conviction, there should not be any doubt on the integrity of SC Chairperson. Too much money at stake!

For being unethical and devious, she (together with Azman Mokhtar and Tony F) should also quit from a review panel of our national education system. Those with questionable integrity, competency and conduct will not add credence to our education system.

Sorry if we are seen as not being gentleman to a lady and humble to our adversary in moment of victory.

If Anuar Ibrahim is looking at the Freddie Mercury Video..I think he will be sexcited..Freddie the gay backside is gyrating..maklumlah now the sex is under watch and scrutiny..and Azizah dont have any more fancy for it..poor Anuar!!!