Discrimination or prejudice? Business or racism? 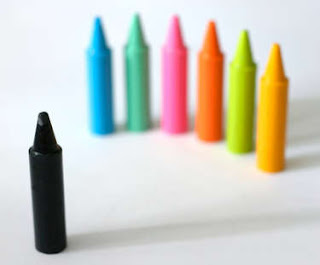 It was clearly stated in the introduction of the seminar presentation that the study was about racial discriminatory practices in hiring workers in the private sector and not about racism, prejudices, and what not.

But some numb-nuts could not resist to give a generalisation that "Malaysian employers practise racial bigotry, study shows." However, the Bahasa Malaysia version was toned down as plain and in a matter of fact manner as  "Malaysian employer prefer to take Chinese worker over Malays."

At the end of the report by the Malaysian Insider's Debra Chong here and the BM version here, one can see the agenda emerging to promote an all sweeping removal of racial discrimination. One can sense any form of affirmative action, even if it is specific for the lower economic class is dubbed as racial discrimination.

How quick these left leaning media are in spinning anything resembling counter argument, though it is merely indicative and not confirmation, to their agenda and interest from a stated fact.

And that is what we should be looking at the study as stated fact derived from the a specific study with it's limitation and appreciation for it's accuracy.

One can question the research methodology, or sampling method and perhaps make suggestion to improve it's accuracy. But give due respect to the researchers ability as academics.

However, the finding of such research should be appreciated for what it is and not to be taken out of it's academic context, especially when one consider that the researchers go to great length to clarify the limitation of the study as to avoid deriving the wrong assumptions and conclusion.

Most reports have maintained within the conclusion of the study and not to get overzealous to steal the thunder by their own opinion and agenda.

Although, there are issues that was not highlighted enough, let's read the report by The Star below:

KUALA LUMPUR: Not only are job hunters selected based on their ethnicity but also which university they graduate from and what languages they speak, a study on hiring discrimination found.

The study by two local academics showed racial discrimination in the callback rates for Malay and Chinese applicants for engineering and accounting jobs in the private sector:
The findings of the study “Does race matter in getting an interview? A field experiment of hiring discrimination in Peninsular Malaysia” by Dr Lee Hwok Aun, senior lecturer at UM's Department of Development Studies and UKM research fellow Dr Muhammed Abdul Khalid were released at a public seminar yesterday.

One of the reasons for the study was the mutual claims of bias ethnic dominance in the civil service versus private sector prejudice against Malays and Bumiputra.

Dr Muhammed said there was no systematic empirical study as yet on the effect of race on employment prospects that controls for variation in applicant quality.

“Our study has shown that quality matters but it matters less than ethnicity.”

Dr Lee said the findings lent support to calls for an Equal Opportunity (EO) Act for the public and private sectors and an EO Commission.

Noting the study had not revealed why there was racial discrimination, he said it was a start and more work needed to be done.

“There are different dynamics in the labour market and it is not a simple case of black and white.

“We need to go to employers, to study their reasons for recruitment but it is not an easy task and we don't want to rush into this.”

For the study, they got the resumes for a degree in engineering/finance from an online employment portal, pooled the all-male applicants into race and quality and sent out 3,012 letters for 753 advertised jobs.

The companies were classified as Malay/Chinese/foreign-controlled based on the names of shareholders and directors.

Something more basic than the research and conclusion discussed was the number of callback to Malay applicants. See the table below we managed to pick from the presentation yesterday. 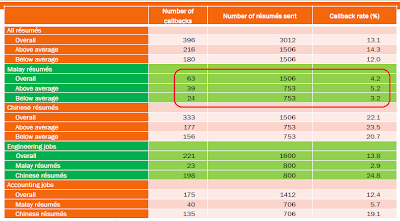 The encircled set of data shows the number of callbacks the Malays applicants received. Out of 1,506 resumes sent, only 63 or 4.2% received call back.

Sad isn't it when one see basic economic activities for any human has discriminatory tendency.

One frequent blog commentator, Donplaypuks cry out one human race slogan in his comments in blogs. How would he twist and divert from the real issue under question here? Heard he is launching a book.

Is this where 1Malaysia or Malaysian Malaysia will eventually lead us to?

Well bro, what do you expect when 80% of the business are Chinese. That is all what the study shows. It does not shows that discrimination or what. In the civil service, army, police etc Malays are more likely to be accepted than Chinese or Indians.

If Indians dont know BM they cannot be accepted into the army. This is not discrimination. This is because Askar Melayu naturally speak Malay.

If you only speak Indian then you may be ready for the Indian Army.

So UMNO has to buck up. Create more factories. It is that simple.

I'm just observing what create factories commented above. Create factories said "what do you expect when 80% of the business are Chinese". Suprisingly, in engineering Job Malays were rejected by Foreign-controlled, Malay-controlled and Chinese-controlled, In that order. In what sense does malay rejecting malay falls into natural sense of business environment demography...

I think a more thorough studies should be conducted before we could arrive at any conclusive evidence of discrimination.

Akubas86, I think what Create Factory, meant why dont you check on Petronas, Telekom, TNB or Celcom all high tech and have a big majority of Malays employees. Are you saying they discriminate? Of course not.

How about KRU, a sme. They employ malay actress, actors etc. No anti Malay here. So which Malay company discriminate against malays?

If the purpose of the article is to denigrate Malays students for being unemployable that is another thing.

If the purpose of the article is to show that Chinese company shows positive affirmation for their race that is one thing.

If the purpose of the article is to show that Malay companies discriminate against Malays that is strange indeed. But this is unlikely as Telekom or Celcom,Maybank,PNB, EPF, Bank Negara or Petronas can show.

So, is it about english competency or about racial bigotry? The study doesnt really show it.

If Malay companies call up Chinese its obviously because they are merit minded and think those candidates can do a better job. Good for the Malays to be merit based.

Akubas86, have you read that Lee Sheng Cheng from IOI want to hire 40,000 non Mandarin speaking workers, non Chinese from Bangladesh? He needs them to do the heavy and dangerous work in his thousands of acres oil palm estates. He is a rich Chinese landowner you see. No discrimination here.

Have you missed the appeal for 14,000 Malay indon worker to work in dirty Chinese furniture factories in Johore to Mustapha Muhamad?

They sure love Indians and Malays here hehe..

Do not be blinded sided by irrelevant issues.

UMNO must build more factories for Malays youth. UMNO must limit destruction of our heritage the Rainforests by Chinese landowners so they wont need problematic foreign workers.

Do not miss the forest for the trees..hehe (pun intended)

"Dr Lee said the findings lent support to calls for an Equal Opportunity (EO) Act for the public and private sectors and an EO Commission."

Thank you Dr Lee for the research that shows Chinese companies discriminate against Malays students. It is obvious but this study just prove it for those numbskulls in UMNO.

But Dr Lee remedy by having
EO is not the right one. Chinese have the right to choose who they want. What is required is that UMNO build more factories. It is so simple.

Any Chinese can do it by simply bringing in second hand factories from their families back in Taiwan for a small amount.

These equipment are usually antiquated and labour intensive. A study in NST recently said Chinese factories (90% are chinese owned) are dirty and polluting.

What we need is for UMNO to stop bringing in cheap foreign labour to work in these Chinese owned companies! If we stop these flow we will stop social and crime issues. How many of us have personally known some one who have his house broken, bags snatched by foreigners?

The Chinese solution is to live in gated housing with foreign labour as guards to guard their ill gotten richness.

"Sad isn't it when one see basic economic activities for any human has discriminatory tendency."

There is nothing to be sad about. It is about mismanagement and abused of power by UMNO leadership. The UMNO leadership has been bought by Chinese interests through Directorship in chinese companies or even shares.

What Malays need to do is develop their economy. Its that simple. Then Malays dont have to depend on MNCs and Chinese employers.

The notion that Malays companies reject Malays can only imply these are dummy Malay companies which in reality are run by Chinese.

But of course there is Zahid Hamidi Vice President of UMNO who said in the NST, he never employed Malays in his business, have no contact with Malays..haha. Yet he pretend to fight for UMNO!

Thus, the definition of Malay companies is suspicious if going by the directors name and shares. It is highly unlikely that Malay companies would not call back Malay candidates. Especially if you have a Kelantanese HR manager. No Kelantan Malay would be left behind.

Besides, first impression is very important to MNC. If the applicants put in a photo wearing ketayap or selekeh, he is out. Why dont the U M researcher send in resume with smartly, tie wearing photos. See whether that makes a difference.

The solution is not EO but more enterprise and factories owned by Malays. 80% of factories or business in Malaysia should be owned by Malays and bumiputeras by enlarging the cake and putting and end to corruption by Chinese business.

Then we can see if Chinese or Malays are preferred.

The research is also flawed because the researchers only sent out 3000 resumes to 750 jobs vacancies.

This is really stupid of the morons. Every jobs should be sent the same number of Malays and Chinese resumes then you can compare apple to apple.

If they sent 10 Chinese and 10 Malay resumes per job that would be 14,000 resumes at the minimum.

What they have done is sent random number of resumes based on what? This is because every jobs have different requirement so it just cannot be pinpointed to race.