Taking 40 years off my age 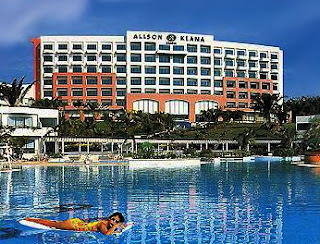 It's been a while since we've visited our old Alma Matter, MRSM Seremban. That's the hotel nearby, not the school. With bikini-clad girl student in pool, how we wish.

So today, having missed too many class gatherings, we are making a trip to Allson Klana, Seremban this afternoon to attend the 40th Anniversary Dinner of MRSM Seremban. Been too busy and engrossed to get together with them.

The dinner also commemurate the institution of MRSM. As the first MRSM of the 47 MRSMs in existence today, our anniversary is the institition's anniversary.

The dinner will also be a time to get re-acquinted with lost friends and do some re-bonding with those still closely in touch. Naturally, many will be lost in their reminiscence of old times.

That's taking off 40 years of our age.

Ah gawd! It's not about recalling our wonderful 20-30 something year old life.

This reminiiscence will go further back to early teens where we were going to class in shorts, crew cut hairs and later on it goes yuck! bell bottoms, sight burns and Led Zeppelins.

Then there will be those few doing their ego trip. Some may need the occasion to boost back hurt ego from being pushed around back in school. Heck! It never bothered and never impress us. For each, his or her own.

AS far as we are concern, we are going down to Seremban to commemurate history and meet friends; to know where they are, what happen to them after all these years, and who is still a round. Over the past few years particularly, quite many few of us have passed away.


The reminiscence is quite relevant for us because the MRSM that we grew up with is not the same anymore.

It is not so much the building and its facade although our school was converted into a pre-U and preparatory college many years ago. Our ANSARA branch alumni is not reproducing off springs.

The MRSM that made us that fearless, independent and adventurous individuals have changed too drastically and lost together it's tradition from too much tampering over the years. Back then, there were no uniforms, more leeway in the hair department and no one frown on socialising with the opposite sex.

We were going to class in T shirts and blue jeans like some American High School. Things were so going on fine and cool till some idiot in the Ministry of Education complained. It only takes a moron to think uniform equates to discipline. Party poopers!

Then some teachers from other school were hired and they brought the strange culture of disciplinary teacher and caning. And it has continued for the worse till today.

MRSM education today is also suffocating from too much religion; compulsory jemaah prayers 5 times daily, compulsory to complete reciting Quran in their 2 years stay, and even the existence of Hafazan Quran program at some Ahlul Bait MRSM (?).

The religious disciplining goes to the point of banning music. Something unheard off in our days when music fills the air.

What happened to turning self confident, self discipline students that take charge and aspire to be leaders and entrepreneurs of tomorrow? Majority of ANSARA Seremban are entrepreneurs and few very successful ones.

These days, MRSM is turning students into Taliban religous zealots. Some years back, one former Taiping student was shot in a bank heist linked to the Al Maunah. MCOBA has their Dr Azahari and we have our own.

Most of the time, MRSM is churning out straight As without soul and plain cold personality. Ask the  lecturers in universities complaining of how square MRSM products are despite their hardworking regimented ethos, and academic achievement.

Over discipline made them into personality without character and confidence. When they graduate, they turn out to selfish salary workers! 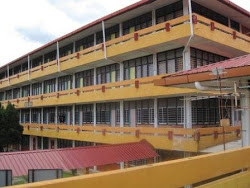 Perhaps, these are the very reason to commemurate MRSM and send the message up there that we need to go back to the basic of to emphasis mathematics and science education and character building.

It will not do so when proven and tested institutions like MRSM is delivering education NOT  dedicated to develop future leaders in business, politics, academia and government with wholesome characters and technical competency?

In our opinion, the old MRSM is best suited for the time albeit with better discipline and more creativity and dynamism introduced.

The least is to go back to the Form 1 intake. No more benefiting from the effort of Ministry's schools. Taking in the best Form 3 results is not producing MRSM products but lazy ways of generating KPIs.

Return to MRSM into 5 years secondary education and stress in polishing late bloomers with potentials.

Let the MCKK, TKC, SDAR, etc take the best because we will eventually beat them later at MCE and everything else because the system developed by MCOBA's Wahab Alwi is supreme.

The root of the problem lies with some of the morons running MARA HQ over the years.

The Director General of MARA kept coming from the failed entrepreneur development side. Unfortunately, the last education side placed as DG is a mamak kaki pengampu. He is now coverting with Tan Sri Khalid Ibrahim's PKR Selangor Government who has betrayed the agenda Bumiputera.

Another problem is that the quality and sense of dedication from the present crop of teachers have been deteriorating over the decades. The idea of closeness between teachers and students is gone.

Some MRSM principals feel it is beneath a teacher to socialise with students. These morons are paranoid of former MRSM students becoming teachers of MRSM. They fear we will incalculate the wrong values.

The biggest morons running MRSM are the wardens. It is not an exageration to say they are  recruiting agents for Osama Bin Laden. Quite sure they are the type willing to lie on the road to block Raja Nazrin's car during the Perak crisis. So forget about the culture of wardens are like our elder brothers and sisters.

For more than 10 years, doctoral candidate Nizam from MRSM Kuantan have been advocating having our own teachers training program as the way to revive the MRSM system and culture.

As far as tonight, the guys have been doing some effort and got a slot on TV3. Hey ... we've got friends everywhere and capable of ousting the MCOBAs, ok? Just kidding, who cares from where you are as long as you do things right.

Rather late to promote the event, but the video from MHI below:


So tonight, we'll be seeing oldies friends and oldies performing and thinking they are still cool.

And please not too much speechy speechy stuff. ANSARA people have a bad habit of talking during the speech session. Hopefully, do the makan first and the speechy stuff after that. At this age, we are beyond being lectured to.

But can't avoid teachers yacking out like those days too. These days, there is much less of that and they are quite happy to see their successful students, except old principal Jebon.

He just can't rid off that old habit. Will he still be talking? It will remind us of his long assembly speeches trying to knock sense and inspire us.

To all our teachers, whether you are around tonight or out there, thank you very much. We owe you our life.

So you are the product of NEP,are you class mate of Dato Wahid and Mukiz.
I hope somebody from MRSM. One day will lead the nation as PM.

Maybank is ANSARA forte, her CEO and CFO are ANSARA...pity though, only two women in the top of the heap..i.e Head of Human Capital and Head of Maybank Singapore..I bet none of them are Ladies' ANSARA. What to do, although MRSM is coed College, it bread Macho culture...

you may not be aware that mrsm was the brainchild of a mcoba - wahab alwee who was a director of mara education division. so jangan lah benci sangat kat orang dari mckk! bukan smorang macam aljuburi. mckk class of '65

We know of Wahab Alwi and his MCOBA pedigree.

Anyone developing an education system that can developed Malays should be saluted.

Hey ... with Malays like that, even if he came from Maktab Melayu Telaviv, we are okay.

But not idiot like Anwar Ibrahim and Azman Mokhtar who are destroying Malays and Islam.

They are the image of MCOBA today. Not to mentioned Nazri Aziz.

We know of your espirit de corp but be fair and dont overdo it like what you guys are doing.

We hantam also our collegians like Husni Teraju and others if they get way out of line.

Selagi Melayu belum maju, no Malays should be snobbish towards fellow Malays and for that matter other human.

why shd the position be given to a woman, justcoz she is a women?

problm w women is though academically brighter, generally lack in confidence, leadership and lost focus on their job.

usually they are more oriented to running a family.

sometime one can blame the mcp husband or in laws pressure.

So u're the one wearing red cap last nite, right? Batch 72? I'm from batch79, did a part in the opening act last nite:-)

I was offered a place in MRSM way back in 73 but my father declined the offer and instead took up SJI as a second option.Only later i found out that i was supposed to be the pioneer student of MRSM should i took up the offer.

Anyway,eventhough i was not MRSM's ex student but i'm still proud to be choosen to become one once upon a time...

A school which legacy stopped after 15 years of operation. Only twelve batches and that's it. Now, being remembered as something which happened in the past.