Musa, Anwar and other politico-corporate development 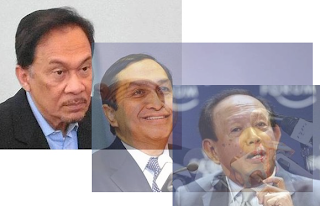 In case readers did not notice, Musa the Fox campaign picture was removed from this blog this morning. It is officially lifted.

And Tun Musa Hitam did the gentleman thing to not seek re-election as Sime Darby Chairman.

However, it has got nothing to do with our previous posting calling for him not to seek re-election. [Read here.] He had planned for it and told shareholders at the AGM.

"I had intended to serve Sime Darby for three years from 2007. However, due to a number of reasons, that decision was delayed until now. I hand over the reins of this great company to the next generation of leaders. I do so with an easy heart.”

While it is easy for Musa, it is not getting easier for Dato Seri Anwar Ibrahim.


The court of appeal has ruled that Anwar will be required to appear in court as witness in the lawsuit by Hong Leong bank against shareholders of Aras Murni Corporation Berhad (AMCB).

[Read our past postings: Opening of Anwar's Pandora Box and Security Risk of Hood Osman.]

Actually, there is supposed to be a bigger revelation from the past to come and haunt him. Not this one. 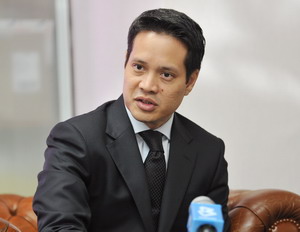 Why is PNB still keeping this dude, Hood Osman with a financial lawsuit up his neck?

Isn't having a CEO with a lawsuit subjecting the company to risk?

Doesn't he read employment contracts that they must be free from bankruptcy? The least he could do is put Hood on gardening leave.

There are many unsavory rumours circulating with regard to the construction of the 100 floors Menara PNB. Rumours are saying the Menara PNB Project Office, if there is one yet, is beginning to be a de facto business arm of the Persatuan Anak Kelantan Malaysia.

Does he think BN can win in Kelantan and it is time to dish out rewards? 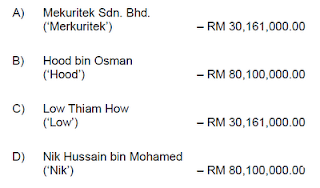 Hood together with few others are sued by an old crony of Anwar Ibrahim, Tan Sri Quek Leng Chan's Hong Leong Bank with regards to an old loan given AMCB to takeover Kewangan Usaha bersatu (KUB).

Deal and loan gone sour and Quek wants his money back. Perhaps, the far sighted Quek do not see any prospect with Anwar Ibrahim.

Freedy Kevin highlighted in his blog here that:


The Court of Appeal here on Wednesday allowed an appeal brought by a businessman to amend his statement of defence to include the involvement of opposition leader Datuk Seri Anwar Ibrahim as the person behind the RM445mil deal to acquire Arus Murni Corporation Bhd (AMCB), which was owned Kewangan Bersatu Bhd (KBB).

The businessman dare to take up the loan because Anwar was involved.


"When asked by his lawyer, D. Paramalingam, how the companies and individuals were related, Low said: "From what I know, they are all cronies of Datuk Seri Anwar Ibrahim."

Is this the man Pakatan Rakyat wants to lead this nation in the fight against corruption? Imagine, the people falling for the allegations he made on corruption but he himself is corrupt.

Oooo ... let's wait for this court case first. The financial scandal on Anwar will involved billions!

As far as we know, Tun Musa never had a history of corruption. Our concern is that he is a political animal. He cannot shed his habit as politician, his behaviour as politician and his manouvring like a politician.

In the time to come, we cannot afford to go on like this. Prime Minister has already started making Board of Directors of IMDB comprise of professionals and no politicians.

The Star report today on Musa: 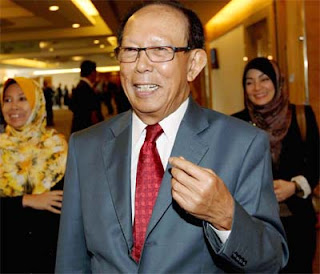 PETALING JAYA: Former deputy prime minister Tun Musa Hitam, 78, has relinquished his position as director and chairman of Sime Darby Bhd after holding those positions for more than five years.

In an AGM and EGM that were held concurrently, Musa announced that he did not seek for reappointment citing his age factor and after steering the group out of the doldrums. The group's energy and utilities incurred a whopping RM1.7bil in losses in 2010.

Shareholders that attended the meeting said Musa expressed his wish to retire in view of the current healthy financial position of the world's largest-listed palm oil producer by acreage.

Sources said Musa had already disclosed his decision to step down several months ago and he had scaled down some of his activities.

“I had intended to serve Sime Darby for three years from 2007. However, due to a number of reasons, that decision was delayed until now. I hand over the reins of this great company to the next generation of leaders. I do so with an easy heart,” Musa told the shareholders in the morning.

On the meetings, Minority Shareholder Watchdog Group (MSWG) CEO Rita Benoy Bushon said: “Many questions were riased by all shareholders including the MSWG. Our questions were answered adequately in the AGM.”

On the group's employee share option scheme (Esos) proposal that was passed, she said questions were raised to seek clarification on the scheme including when it would beissued.

“The shares would only be granted after three years,” she said.

It is learnt that president and group chief executive officer Datuk Mohd Bakke Salleh had expressed his intention not accept the Esos option.

The Edge Daily report below:

The announcement caught many by surprise, even though the former deputy prime minister had hinted in the past that he would retire from the Sime Darby board when the “time is right” and after the conglomerate had put its house in order following the RM1.7 billion losses suffered in 2010.

In a statement issued to Bursa Malaysia yesterday, Sime Darby said Musa had expressed his desire not to seek re-appointment as a director of Sime Darby, and therefore retired upon the conclusion of the group’s sixth AGM.

Tan Sri Samsudin Osman will serve as interim chairman. Tan Sri Hamad Kama Piah Che Othman, the deputy chairman, is expected to assume the chairman’s post as he is currently president and group chief executive of Permodalan Nasional Bhd, the majority shareholder of Sime Darby with a 51% stake. The Employees Provident Fund is the second largest shareholder with a 11.75% stake.

Musa’s announcement came as a surprise because he had not indicated that he would leave the board when the notice for the AGM was sent out to shareholders a few weeks ago.

Sime Darby said Musa explained to the board yesterday morning that he had, at the time, been unable to communicate his true intention for several reasons, including a desire to contain speculation.

Musa also said he had originally planned for his retirement much earlier. “I had intended to serve Sime Darby for three years from 2007. However, due to a number of reasons, that decision was delayed to now. Now, as I hand over the reins of this great company to the next generation of leaders, I do so with an easy heart,” he told shareholders at the AGM.

Musa is currently chairman of Lion Industries Corp Bhd and United Malayan Land Bhd, both of which are listed on the Main Market of Bursa Malaysia. He is also on the CIMB group’s international advisory panel and the World Islamic Economic Forum, as well as a member of the International Advisory Board Rotterdam and a member of the advisory board of the Malaysian Journal of Diplomacy and Foreign Relations.

During his chairmanship of Sime, the group saw its net profit shoot up to RM3.5 billion in its first year of operations as a merged entity. But trouble started to show in 2009, when the energy and utilities division recorded massive cost overruns in its Qatar projects.

This brought down the group’s profit to RM727 million in financial year 2010 ended June 30, resulting in former CEO Datuk Seri Ahmad Zubir Murshid being told to step down.

Later, Sime Darby filed a civil suit against Zubir and four others over their alleged roles in the RM1.7 billion losses. Zubir also faces a criminal charge in relation to corruption during his tenure at the helm of Sime.

Musa just can't help it in being a politician. It reminded us of his surprise resignation as Deputy Prime Minister in 1986. He broke the heart of many Johoreans and supporters then.

Anyway ... he is a gentleman after all.

Bro
For Musa Hitam the game already over.He is already 78 year old.Suddenly he felt deathmis aroundbthe corner.I just came back from Haj and to mynsuprise I met Dato Burhanuddin Musa,Tun Musa close friend,He went to Haj with his three daughter.
For Anwar Ibrahim,live is just started.He had many things he want to do,which could not be done when he was sack from UMNO and govertment.Give him a chance.

ANWAR HAS MANY THINGS HE WANT TO DO. LIKE WHAT?

Anwar is a credible man. He should be the next PM.

Me and my 3 year old daughter will be missing Musa the Fox picture. My daughter never fail to point out the fox that she saw each time I'm on your page.

Will there be some more injuries coming from him soon? He may be 78but still looking sharp and foxy. I hope i won't have to read about him here anymore and that the foxy picture of him stays down for good.