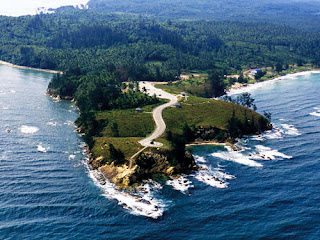 Finally there is Internet access in Ranau for us to do our better late than never update. No politics yet, only the travel.

We were up early Wednesday morning. A normal early day in Sabah is around 5 AM.

Had a simple spartan breakfast of hot drinks, bread, and spread. Packed our stuff into the vans and off we left the homestay apartment for Kudat.

The homestay is owned by a gentlemen from Pasir Mas, Kelantan. Yes, another Semananjung smitten by peaceful Sabah.

Kudat is not that far and within two to three hours from Kota Kinabalu. However, we have to allocate time for sightseeing and schedule swimming for the kids in the evening. 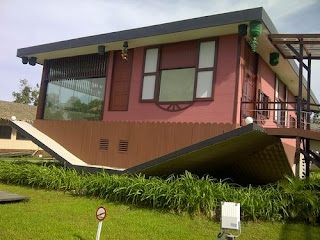 Within less than an hour, we reached Tuaran. Along the way one can see long lines vehicle heading towards KK. Many KK office worker commute from Sepangar and Tuaran.

Our scheduled stop is at a upside down house in Tuaran along the Kamparuli route. It is the sort of attraction the kids would love. The brother from Penang came with one kid and the one from Subang Jaya got three of his own. . 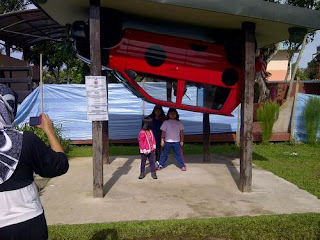 The house was built as a tourist attraction by a local entrepreneur. There is no history, no local tradition and no local legend. Google and one can find more information and pictures on this house.

They are not Anwar Ibrahim's supporter too but only an entreprenuer with a unique idea.

It is quite a tourist attraction. Tourist buses seemed to stopover.

Everything inside and outside the house is upside down. There is even a car bolted up to the an upside down outdoor garage. 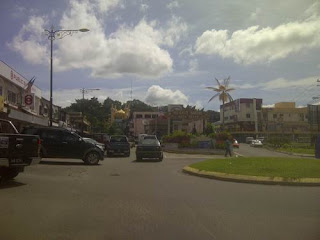 Kota Belud  reminded us of Bajau, buffaloo race and Tamu market. It's not yet padi harvesting season to see the traditional buffaloo race.

And it is not weekend for Sunday Tamu market.

We cannot miss it.

It is the hometown of quite a few of our political friends. In fact, we met one USBO leader inside the plane to KK and told him we are doing a long wanted 10-day tour of Sabah. 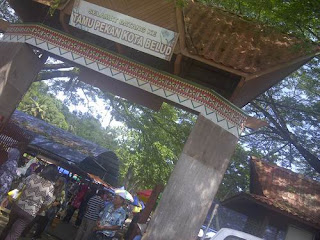 The Gamin Direction Finder also had a Tamu market as destination and we gave it a try.

Luckily, the Tamu market is open and the Mrs go crazy over the local kueh cincin, "lepat" and  jagung rebus, and other kueh. That is the breakfast we missed 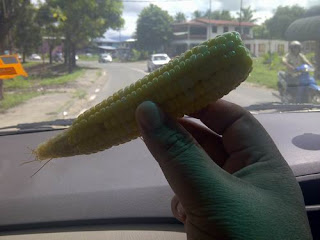 The jagung is small and 'cute'.

In the car, we were kidding about it being the Member of Parliament for Kota Belud, Dato Abdul Rahman Dahlan's jagung.

It could pass-off as durian but the outside is soft and one can prive open the fruit by hand effortlessly. The fruit's inside looks like small white coloured cempedak.

The taste has a touch of vanilla. 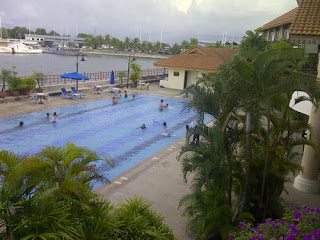 By noon, we reached the Kudat Golf and Marine resort. It is near town and for all practical purpose, it is in town.

We had lunch and check-in to the rooms. The adults took their nap till we were awaken by voice of kids screaming from the swimming pool.

All the 4 kids go crazy too.

Thank god it was Maal Hijrah that evening. Otherwise, the "water babies" would stay in the pool till late into the night.

After doing our new year doas and evening prayers, we wait at the lobby for our Kudat friend, Harry. 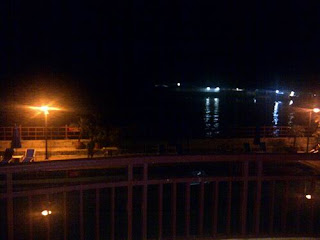 He turned up as schedule at around 8 PM with Harry junior, his expecting daughter, Kelly and her husband - the District Officer of nearby Kota Merudu and their daughter and Harry's first cucu, Annabelle.

Harry's wife was in Tuaran and doing the 'hantaran' for Harry Junior's Sunday wedding. Is that the woman's responsibility in a Rengus tradition?

Their house is just 5 minutes away. No wonder they were perfectly on time. And we all left for dinner at a local halal seafood restaurant.

After a disappointing lunch at the resort, we went a bit crazy on the ordering. The bill too went crazy for a setting of four hidang, but it's on moi. It's quite alright.

After hearing from Harry about the work the Engineer owner of the restaurant to the community, it was worthy. He is one potential 'winnable' candidate for the local UMNO. Too bad he holds no position in the party. 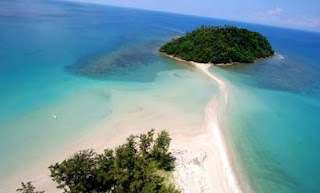 Kudat is a small town but well maintained and clean.

Harry served as member of the local council. He said the town used to win the award of the cleanest town in Malaysia. Perhaps, it now lost out to super-clean Melaka.

It's economic activities are agriculture and fisheries.

Oil palm and some rubber are coming up after logging activities has not left much for more extraction and need reafforestation.

There is fisheries activity, but it may have suffered from over fishing. Furthermore, Kudat has limited fishing area. It is too near the Phillipines marine border and Palawan island.

In the nearby island of Bangi and it's surrounding island, there is rearing of fish in the cage. The island is larger than Langkawi and populated by poor fisherman.

Sorry to say, Tun Mustapha's son and ADUN for Pulau Bangi, Dato Amir Kahar didn't do a good job there. Anwar is most welcome to hijack him over. 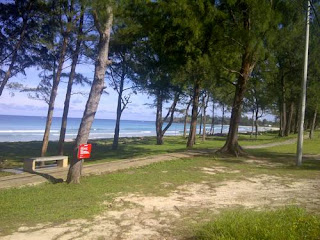 However, Kudat has abundant of tourism resources and still untapped. It has beaches, islands, forests, and culture.

There is accessibility by land or air. MAS used to fly to Kudat, till that greedy bastard Tony F stole the route but later stopped. Thank God there is still MAS, MAS Wing.

Hope Harry could do something to develop more activities and attractions in making Kudat a  major tourist destination. It is a cause worthy for Harry to struggle for instead getting frustrated with Sabah politics and politicians.

He used to be the Ketua Bahagian of PBS Kudat.

Ensure it generate economy to the locals and not to only enrich further some taukeh from KK or Sarawak. Avoid the crass commercialism from mass tourism. Keep the simple small town innocence and charm.

Most importantly, conserve the environment. It is God's gift to Kudat. 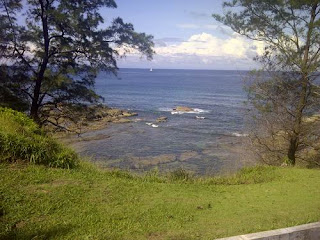 The next day, Thursday, the first thing we did after breakfast was to go to Tanjung Simpang Mengayau or the northern most tip of Borneo island.

The place is 'too beautiful' to describe. Better to post more pictures. A picture paints a thousand words, isn't it? 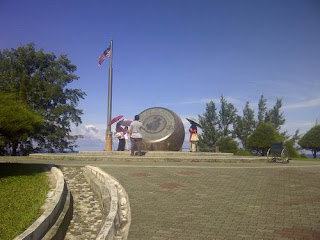 We went straight to the 'tip'.

Weather was fine but hot so we had a drink at the tourist centre overlooking the sea.

We can't resist not going for a swim in the uncrowded beach. Pristine water, white beach and calm wave. The seawater was not as salty as usually is. Swimming was not so strenuous on the eye.

One can find cheap beautiful shells and coral sold by the local divers by the roadside. We bought quite a few shells but not corals. Conserve the corals by not buying. We spent couple of hours at Tanjung Simpang Mengayau that we hardly did anything else that day but savour the beautiful quiet surrounding.

Before we left, Friday morning, Harry came with the wife and all his family. Our Maxis phone had problem and we couldn't get hold of him the whole of Thursday.

He came over with the whole of his family before leaving for Tuaran for Harry Junior's wedding Sunday. The whole family is invited for either the church ceremony at 10 AM or reception at a Dewan by 12 PM.

Kudat was a great place for a stress free two nights relaxation before leaving for Kundasang near Kinabaloe (Mount Kinabalu). 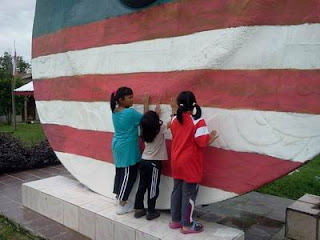 Harry came from nearby Pitas but in those days it was quite a distance. He benefited from Kudat and returned back to contribute to Kudat.

He had his primary education here. It is still common for children to live in hostel at a very young age to go to school in Sabah and Sarawak. It is Sabah and Sarawak that need more residential school, not us in Semenanjung. Relocate the budget.

Subsequently, he got himself a place in a boarding school in Seremban and that was where we met him. Later he continued his tertiary education in Shah Alam and Penang. He returned back here after working in KK for a while and is active in the community.

Hope Harry can do something for the nice people of Kudat. They deserve to benefit from this place we can only described as God's secret hideaway. 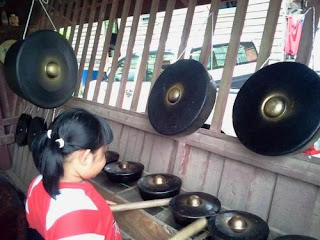 On the way to Kundasang that Friday, we visited a one kampung, one industry project at Kg Semangkop for gong making. We bought one and the parents bought one each.

From your travel log....I agreed that Kudat is the paradise to be preserved for our future generation

I was there !!! what a wonderfull place!

Sorry unable to host you overthere. Anyway good to hear that you and family is having a great time. It is a beautiful place.

Thanks for the correction. We've been merayau rayau for days that it easily to confuse mengayau as merayau. :)