Musa should not seek re-election ... 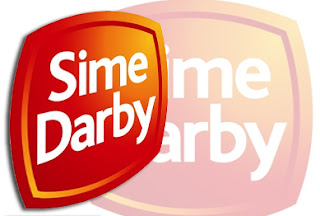 ... and learn from Bakke's examplary leadership and classy gentleman act.

With regard to the performance-based employee share scheme announced in a circular by Bursa Malaysia dated October 16, this blog have given Sime Darby the right to reply, explained the reason behind the issue we raised, and lent a hand to re-presented the scheme.

The Board of Directors made a decision on October 8th, and announced an EGM for November 8th in a circular dated October 16th.

Though it is legal and in accordance with Bursa Malaysia rules, it leaves a perception that there is an attempt by company to silently bulldozed the proposed scheme over the shareholders and stakeholders.

Despite the assistance we lent to Sime Darby to clarify matter, there are other parties not convinced. 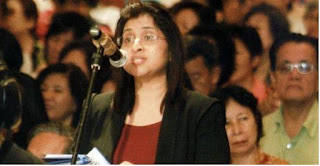 Last week on Bulletin TV3, the Minority Shareholders Watchdog Group (MSWG) raised the issue of the scheme. They are not against it but felt it is premature for Dato Bakke to be considered as potential grantee. (Read Bigdogdotcom here).

It is heard that Bakke is gracious enough to withdraw himself from the scheme. It seems he has decided to do so for quite a while.

Having understood the scheme and basis for Resolution 2 and 3, we do not see any reason for him to do so than to avoid public misunderstanding. He may not want any controversy to shed a bad light on the whole scheme that should benefit executives and management of the company.

The announcement was supposed to be made Monday yesterday.

That is examplry leadership in putting the staff and company first before his own benefit. It is the  mark of a true gentleman.


However, we wonder whether Chairman Tun Musa Hitam can emulate Dato Bakke to be as selfless and not seek re-election at the AGM on November 8th too?

Prior to the tri-merger in 2007, Tun Musa was merely a Chairman of Guthrie Malaysia Berhad, one of the three giant plantation companies that merged to become Synergy Drive Berhad and eventually take over the original name of one of the three plantation based company, Sime Darby.

He was representing the interest of PNB whose Chairman is Tun Ahmad Sarji and CEO is Tan Sri Hamad Kama Piah.

As a Chairman nominee of PNB in Guthrie, Tun Musa is lower in the PNB order of hierarchy to Sarji and Hamad. But, he abused his political connection and personal relationship with former Prime Minister, Tun Abdullah Ahmad Badawi, to by-passed the hierarchy the organisation he represented.

In his Chairmanship and Stewardship role at Guthrie and later Sime Darby, did he played his role well?

As Chairman and Steward of a company, he is joint and severally responsible as the management of the company and a member of the Board of Director as the highest decision making level in the company.

If any problem arise at this strategic management or policy making level, he is responsible. He is responsible to ensure also that things are working well at the operating level. For matters that is the decision of others, he is expected to play the control and monitoring role.

Should an occasion arise that require decision be made to re-strategise and reconsider earlier decision, he should do so accordingly. And should something go wrong, he should lead his Board of Directors to act immediately.

The question posed now is:

Did the Board of Directors of Guthrie he led as Chairman made the right decision to merge with Golden Hope and former Sime Darby, which eventually lost control to "Synergy Drive" (later renamed as Sime Darby?

Has it been beneficial and resulted in an increase in shareholders' value for the original Guthrie shareholders in the  last 5 years?

And, now as Chairman of the current Sime Darby, did he led the Board of Directors to act swiftly to avert the massive lost occurred from the Qatar project?

As far as we can recall, it was bloggers that raise issue including a ghost blog Sime Darby Watch that revealed and resulted in Sime Darby eventually making a decision on the project late.

If there had not been any disclosure, would Tun Musa and the Board of Directors had acted?

Many felt he would have not and tried to kept it under lid till it blow over. As a politician, he in his natural habit of intending to cover up matters that would embarass himself and any outfit he led.

The decision maybe the responsibility of his predecessor but the strategic role and responsibility of control and monitoring, reassessing and making a decision. If he does not understand that, he is unfit to be a Board of Directors any where.

Tun Musa had and should not have made the excuse that he is dependent on the report by his management. It is his fiduciary duty and he must know the ways and means to carry out his responsibility.

We are fully aware of how and personally know of other non-Executive Chairmen of PLCs, who develop their network of information sources to control and monitor the company's operation.

They have the common sense and experience to detect any potential trouble without the CEO radar detecting. Questions and enquiry would be made in the Board of Directors meeting.

Some of them are Musa's Johor friends.

To them, they cannot totally rely on management report alone and have to have a "system' to get early warning signal of problems. Ignorance to them is not a bliss when one has fiduciary duty to shareholders. No excuse is good enough.

They have managed to avert unfavourable happenings or even disaster from beseiging their companies. 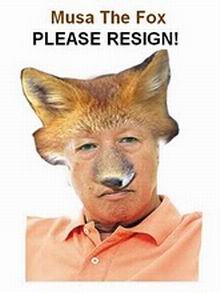 As Chairman of Guthrie, Musa should have done due dilligence on the former Sime Darby and Golden Hope before Guthrie was to merge with.

If he is not comfortable, he should have voiced it with the leadership and not agree. When forced on, he should resign in protest.

He did not do that. It means he agreed with the tri-merger.

Since all three companies have one common majority shareholders, i.e. PNB, that decision was made at PNB level. Most likely, Musa must have been briefed by PNB and knows any untowards happening in the former Sime Darby.

The fact that he acted too late on the Qatar debacle means he slept on the job. He is too enchanted with the corporate lifestyle and mile high flights in company's corporate jet.

Several members of the Board of Directors of Sime Darby have resigned or withdrawn as to take responsibility for the collossal lose. Musa has not done so, and is seeking re-election on November 8th.

Shouldn't he be the gentlemen and withdraw from seeking re-election?

If it is about the money that he is staying, then Musa is no gentleman and has no class. He should learn it from his CEO.

At his late age, he wouldn't want to hear his former fellow Team B members repeat an old description of him as "not as a gentleman but a xxx-er."

All those who have a role to play should be held accountable and responsible, ie from the chairman, BOD, CEO and even the EVP HR, who is the proposer and whose dept is a stakeholder of the scheme and where it resides.

God give them light to do the right things and and do things right.

Can't he just retire gracefully? After leaving public office in the late 80's, he's still very much in the limelight, cutting deals here and there, all using public funds.

I think it's high time Sime Darby be lead by someone else.

Come to think of it, some people complained about Kit Siang, Taib Mahmud, or Nik Aziz being dinasours. Well, some people just found their way to reinvent themselves. Kind of like, a dinasour that wears suit and leather shoes. Still a dinasour, nonetheless.

"Erectile Dysfunctional is only for those six foot under"