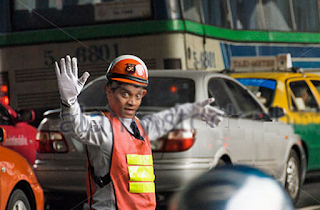 Did anyone realised that parking attendants shows a greater sense of pride and dedication to their work when provided with uniform that comes with a tie and equipped with whistles than those plainly dressed?

Not only did we realise that, we also realised that providing such attire is most effective at getting the best out of the sons of Kelinga parking attendants.

One can see these Keling parking attendants standing proudly as they take charge to direct moving vehicles and present themselves most authoritatively to ensure everything is running smoothly.

Do take it positively and not be offended. Maybe what the Loceng Geng needs is a whistle to be truly effective in their whistleblowing. Bukanlah dok kelentong dan putarbelit merata macam keling gelecek bola.

It was a sham act to claim their blog was blocked. The image of MCMC notice is not convincing.

If MCMC, had done it, they would have blocked off the two black blogs slandering Tabung Haji.

A facebooker was tracking Outsyed The Box closely when he put up the following posting: 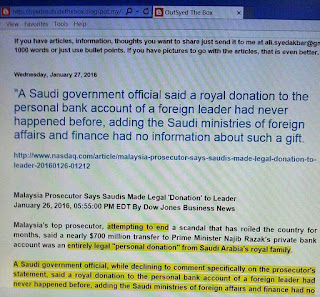 The FBooker expected him to take it down in a matter of few hours and he actually did. Subsequently, he put up the following: 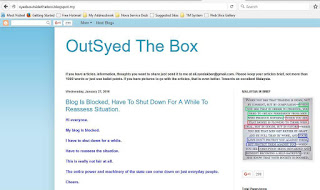 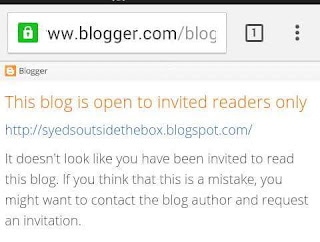 Then he could have got someone to put the MCMC notice whenever traffic goes to his url.

It is quite pathetic that Outsyed The Box and Din Turtle have to resort to such cheap trick to get traffic to their blog. They copycat the typical act of DAP, PKR and PAN.

For instance, this poster. Not so smart are they? Open any annual accounts and tell us if there is such a thing as negative reserve? The explanation is in the previous posting here.

Suara Rakyat is not opposition but Kedah based BN blogger. They are present in one Telegram group we are in.

It wasn't a smart move to touch Tabung Haji again and by the same people. Our late sifu use to say do not do the same trick twice.

As RPK pointed out in his blog here, the Anti Najib Campiagn (ANC) "has to be very careful with this one (Tabung Haji). And that is because if they start screaming, ranting, raving, moaning, groaning and foaming at the mouth the real story about Tabung Haji might just surface."

By Leslie Lopez, The Asian Wall Street Journal
1 December 2004
KUALA LUMPUR — Salmah Mahjid runs a small food stall on the fringes of the financial district here. Each month, she puts 20% of her income into an account at Lembaga Urusan Tabung Haji, a unique government-owned investment fund created to finance Malaysian Muslims’ pilgrimages to Mecca.

The 43-year-old mother of five has just one goal: to create a nest egg for her family to make their pilgrimage, a sacred duty for all Muslims. “I know the money will be there when we need it,” Ms. Salmah says.

But for Mokhtar Hamid, a retired government employee who has put all of his savings into Tabung Haji, the fund was also a steady and lucrative investment. Setting aside money for his pilgrimage is one reason, he says. “The other was the good returns Tabung Haji used to give me.”

For most of the 1980s and early 1990s, Tabung Haji paid annual dividends averaging more than 8.5%, much higher than the interest offered on savings by Malaysian commercial banks in those years.

But the robust dividends are gone and some unhappy depositors like Mr. Mokhtar are blaming Tabung Haji’s management for making ill-advised investments that have eroded the fund’s bottom line. Since Asia’s financial crisis struck Malaysia in 1997, the fund has slashed its annual dividend to barely more than 3%. “This institution is based on religion and the money has been deposited for holy reasons,” Mr. Mokhtar says. “But the management has been a huge letdown.”

A report by Malaysia’s Auditor General, which was released in July, says that some of the fund’s big investments were tainted by serious management mistakes, leaving the fund burdened with poor-quality assets. The unusually harsh report has prompted a police complaint against Tabung Haji by an ethnic Malay student group. Government officials also say that the country’s Anti-Corruption Agency is investigating several of Tabung Haji’s investments.

Tabung Haji officials declined to comment on the developments. But several senior executives, who spoke on condition of anonymity, say the Auditor General’s report reflects missteps made in the past. They insist the situation has improved.


After Dato AWO and the Kompleks Kewangan tidied up the operation in the 90s, it was Abu "Juling"'s turn to wrecked it. Who was the Chairman that allowed it to happenned ... hehehe?

Giving them a whistle 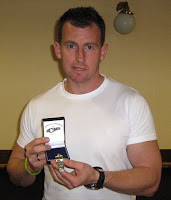 The Loceng Geng have been meeting regularly. Heard they would meet twice if not thrice a week. Operation is now focused on the ground which they think UMNO is most vulnerable.

Since they believe there is a groundswell and the Bantah TPPA demonstration shows their ground operation is not strong. Perkasa could only gather 200 people. One can see it is the same faces.

These people do not look after the welfare of their supporters. Eventually they will tire off.

We anticipate they will use a strategy much favoured by Tan Sri Sanusi Junid to tie the link between the top and the ground. It's old school and non electronic but if able to execute, it will be effective. One person get 5, and each 5 get 5 each and so on. very much like MLM.

Eventually Sanusi can sell his books through this MLM network. Just kidding Akram ... if you are reading, lets go for tea one of these days.

That is one whistle we are giving away.

Now about this ranting by Dato Bahri of MACC. He plus one Dato Rozaid was suddenly seconded to PM Department by KSN and KP of JPA. It was a boo boo and when PM got to know of it, he directed to send them back.

It is highly likely Dato Bahri is angry with Najib. The investigation by MACC is divided up to few people. Dato Bahri was assigned to SRC.

This SRC is difficult to understand and defend. It is no more a subsidiary of 1MDB and now a subsidiary of MOF. No enough sufficient information on SRC except Clare Huxtable's version. Opps sorry, not Bill Cosby's wife in his famous TV sitcom, but Clare Rewcastle Brown.

SRC had several of its management ran off hiding so it only builds up the wrong perception.

According to WSJ, some RM42 million was transfered to Najib's account via two companies and in several transactions.

The pentaksub will standby Sarawak Report and WSJ. Tan Sri Muhyiddin will standby The Edge. But for us, the waiting to be convinced, those are tainted sources.

There is not enough information on SRC. Some information is surfacing from the lawsuit by Najib on Tun Ling Liong Sik. So far he denied the widely believed  information from the mind game.

That is a whistle for Geng Loceng to take authority.

Bahri maybe damn sure he got Najib. So he is unhappy when AG said no case and closed. The man worked damn hard to pin Najib. But he made one mistake. His wife couldn't keep her fooking mouth shut. 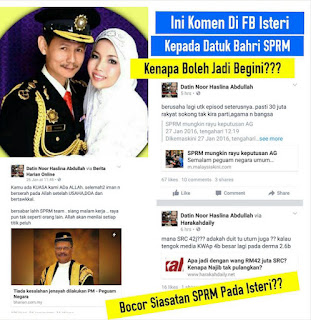 Commissioner Tan Sri Abu Kassim had to step in. 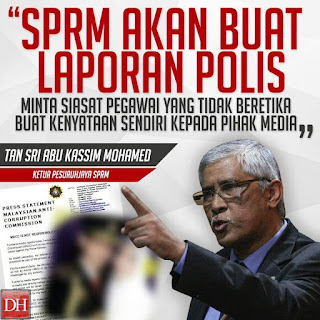 So far, some commentators said they do not trust the AG, Tan Sri Apandi Ali. If it is Tan Sri Gani Patail that said no case, they would believe. Aiyooo ... Malaysian not only mudah lupa but they can sometime be a real stupid dumb dumb.

Gani is one of the worst AG Malaysia has ever had. Have heard Tun M himself said so. But we will not elaborate on it.

People will naturally put into question AG's power to decide, which case he wants to charge and which he not want to charge. But that is how the system works, not only in Malaysia but in Britain and many other places. The investigator cannot be the prosecutor.

So we have no answer why AG does not want to charge. More so, one former Appeal Court judge, Dato Mohd Nor Abdullah was reported by FMT to have said no AG will ever prosecute the PM that appointed him or he will face what Gani faced. No sure if it is a spin or for real.

If there is any case on Najib, it must be really serious stuff. Do not accuse him for billion dollar corruption but finally charge him on technical and prosedural issues. Worse still, charge him for trafiic violation.

He is not a common person but the Prime Minister. The bigger consideration not to be taken into consideration. If there is not bad intent, it is not fair for the country to charge the PM.

Certainly some details from AG as he did on his rejection of IP by BNM will certainly be helpful. He does not need to as he had his team to study the paper. Maybe he will do so upon his return from abroad.

MACC had already said they have no case on 1MDB, on RM2.6 billion but made two recommendations on SRC case. It is reported that after AG returned the paper back to MACC, the IP was send back with three recommendation.

So Bahri could be really obsessed to add another one more.

This issue had many turned obsessed that they forgot something. The RM2.6 billion allegation was initially about it being 1MDB money. Since it is not, they changed the goalpost to the issue of political donation which is a non-issue.

Any opposition leader making it an issue please support our long cause and that of MACC to legislate and clearly define the rule on political funding.

That will be all. Yes, we gave the Loceng Geng a whistle to blow.

But we are not dumb to give away a weapon and bullet to our political competitor. It is a mistake to see us as just a hard working, industrious and subservient Jawa. There is some Bugis blood from our father's side for the strategic thinking and fighter quality in us.

With a Malaysian, American and British Education, we may have the all rounded deception of our Malaysian SB, American CIA and British M16. Ha ha ha ...

There is also one whistle and believe Tony Pua is blowing it but ineffectively done. The PMO and UMNO machinery may be ill-prepared but as far as the arguments to defend it,  Insya Allah, we are prepared.
at 1/29/2016 01:17:00 PM

Anonymous said...
This comment has been removed by a blog administrator.
4:39 PM

Geng loceng? Do you have to go that low, a bit racist lah.
What about Geng loceng Najib? Ali Hamsa, Irwan Serigar, nor Yakob

They are not bloggers. How could loceng be considered racist. Sorry pictures happpen to be indians due to inavailability of right image. The above parking attedant is in thailand. Didnt you notice?

He is a traffic police. Not parking attendent. Didnt know they have indian traffic police in thailand looking like bollywood comedian johnny lever.

I m sticking to your early hunch that say something smells on this jho loh and first ceo shahrol. When will it appear or will it finally appear?

just found your comment in the spam section. To answer you, what you read has no bearing on friendship.

Friendship among us veteran bloggers are not affected by personal views and opinions.

Emotional outburst and name smearing could affect personal relation. However, it usually involves newbies which are too emotional and intellectually inadequate!