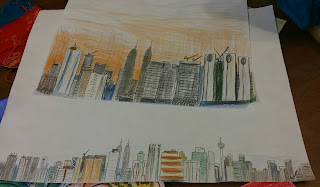 That was Najib's reaction when we told him we couldn't find a sharpener. In preparation for his visit to our home, we had ready papers, pencils, pencil colours and drawing board for him to sketch, but it was a less than perfect situation for him without a sharpener around.

We are talking about our nephew, Najib and not the Prime Minister. Najib is an autistic child or in politically correct term, a child with autism. The negative term is put after the children instead of before.

Children with autism maybe less than perfect, though not physical handicap, but they have keen eye for perfection. In Najib's case, his natural ability is in the arts. The image of his drawing of a city skyline with its fine details is an example. 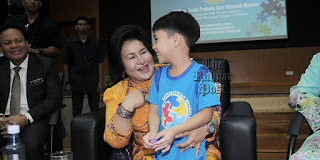 Permata, the government program under the patronage of Datin Seri Rosmah begin to take up the cause of these children in 2013.

Rosmah saw the need to harness the potential of these children. She realised that it need intervention to ensure every family with children with autism have "access to qualify, affordable health care and services cross the lifespan of a person with autism".

From their effort, the Prime Minister had announced the setting up of the National Centre for Autism and turning the Permata Kurnia project into a national centre of excellence for autism in April 2014.

Yesterday, Rosmah visited the Permata Kurnia Centre in Sentul that started operation in November. She was reported by Rakyat Post saying the following:


“This centre is our pilot project. It is just the beginning because we don’t want the programme to be stuck halfway.

“What we are doing is good and is the best for autistic children. I understand what parents want, but give us some time,” she told parents at the centre here today.

Below is one satisfied parent with the Permata Kurnia program:


More such centres need be built all over the country, said Rosmah.

The centre was designed to understand the sensorial issues pertaining to noise, light, sound and smell.  It protects the dignity and privacy of the patients. Most importantly, this center can improve the lives of children with autism.

Naturally, she understands fully well that every space, nooks and crannies must be shaped and formed to reduce problems and yet to increase potentials.

The center is specially created to cater for the above issues after taking into account the physical considerations such as security and safety, colors and textures, floorings, coverings, reducing visual distraction, light sensitivity, physical disability, sensory and stimulation, and maintenance.

An equilibrium must be achieved at different scale as the behavioural pattern of those with autism changes with age.  Imbalance in the design will cause disruption and regression on these highly sensitive children and this has been proven costly.

It complies to the requirement for learning including education, playing, singing, and having fun.

Almost like the cocooned world of autism, the center hugs the activities in a form of 4 physical buildings and an outdoor play courtyard. This allows children to explore inside and outside without any worries.

The "cheese walls" were designed as a beacon and as an icon for easy recognition and visibility.  It also symbolizes as looking through the holes and glimpses into the life of children with autism.

Every children in the spectrum of autism is unique. It is for the people out there to come into their lives, understanding their needs and insecurities without any prejudice. 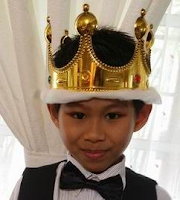 Najib has grown up and his communication ability has much improved. He is the centre of attention and his absence missed at family gatherings.

Now 10 and in primary school at Jalan Batu Kuala Lumpur. Looking like any normal kid and getting normal by the day. He had his pre-school at a Tamil school near his home.

Language maybe his handicap, but maths and science come as a breeze to him. Off course, his parents are sharpening him in arts and music.

They too have the rights to realise their potentials and capabilities so that they can be proud of their achievement, and take pride in their work.

Do not let these children cocooned in their world, and do not deny or abuse them.

The country can be proud of them. In return they can contribute back to the society, and the country. Maybe we could have our very own Bill Gates, Einstein and Thomas Jefferson. Yes, they had autism.

In Malaysia, a boy wonder with autism from Penang received a letter from US President Obama for US record setter's "World youngest savant artist (ASD) to hold a solo exhibition". He is also in the Malaysia Book of Records' "Youngest artist to hold solo visual art exhibition (Autism Spectrum Disorder)."

Anonymous said...
This comment has been removed by a blog administrator.
5:17 PM

We do not need irritants

Anonymous said...
This comment has been removed by a blog administrator.
6:50 PM