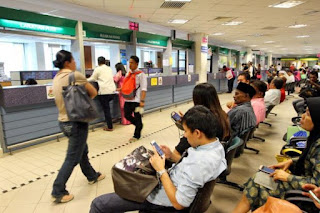 Almost every other person seemed agreeable to the previous posting against taking in 1.5 million Bangla Deshi immigrant workers and profiteering activities to bring in this workers. This ties together with the pressing need to curb the number of illegals already inside the country.

In 2011, government had embarked on a cleansing program dubbed in Malay as 6 P as part of the process leading to flush out illegal workers.

More than 500,000 were successfully registered and it was found that about some 350,000 workers will end their contract in 2014 and 2015. Home Affairs Ministry realised that employers still unable to change business process to lesser labour dependence.

Remember what we wrote of employers lazy to transform their businesses?

By sending them back immediately, it could cause shock to certain sectors of the economy. Sizeable number of employers failed to carry out their responsibility to repatriate workers back to their home country.

So Cabinet decided to allow a bit more time and extent the 6P program by another year. [Read Home Ministry statement mid December 2014 here]. That would have ended in December 2015. It is time for action and a new permit registration is in place.

There is no new 3P cleansing program as viral by pro-opposition supporters in the social media. No program was planned to replace it as alleged by certain rumours.

The announcement to take in 1.5 million Bangla Deshi was in preparation for a major repatriation exercise to happen soon. They will be replacing the repatriated workers in accordance to justified requirement and not at one go.

With a softening economy, it may not come to such number. 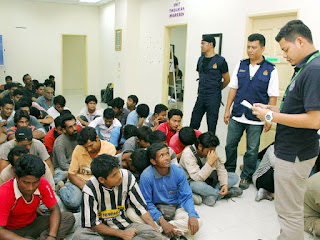 The cleansing exercise does not mean every illegal who registers themselves are legalised. Only those that met the stringent criteria are allowed to stay and continue working. The rest will have to be deported.

If we are to only do enforcement and deportation as emotionally expressed by certain party, government will be burdened with tons of legal cases, most costly and problems will pile-up. The cleansing process help to up-date database and keep it regularly up-dated.

During the cleansing exercise, the immigration office was swarmed with people doing registration and they could not cope. To lighten the burden, it was reported in February 2015 that the services of Myeg was used for registration role of workers permit renewal.

It was a matter of convenience since Myeg is the government official payment gateway. No doubt there will be the usual teething problem as expressed by this July blog posting here. Myeg would have address it by now.

As far back as February last year, Myeg.com had expanded its services to include six additional types of cleansing cases.

Home Ministry had also instituted a new system for foreign workers work permit registration. This time it will be more comprehensive and strategic than the previous failed exercise in 2011.

It not only involve registering the illegals but ensure their welfare during the remaining period of their stay are taken care off. A sophisticated mechanism will be put in place to monitor their activities thereafter.

The slander campaign by opposition was intended to cover-up their shameful slander on government and election commission on the existence of 42,000 Bangla Deshi illegal voters in the last general election. Anwar had on record made a press statement but later tried to deny saying so.

Unfortunately, some party were influenced by certain vested interest into believing Myeg was making tons of money from the exclusive handling of permit renewal of foreign workers. That is still done by Immigrations. Myeg merely serve to assist the front office work of Immigration and payment gateway.

Certain insider or business competitor maybe behind it as the accusation got venomous to accuse Myeg of monopoly. That is far from the truth as Myeg handle only the online registration, but there is also Bukti Megah Sdn Bhd. Imam Sdn Bhd, and Fokus Mulia Sdn Bhd in the consortium.

Myeg had a brush with Malaysia Competition Commission (MyCC) last year but that is for different services and should be dealt with separately.

In November last year, there was a wild accusation that resulted in Myeg being probed for employing third parties to register foreign workers. Myeg had denied the accusation and nothing has come out of it. Any such claims, like for instance this link here, is fraudulent.

The same party have been instigating certain media operator to spread accusation that Myeg was charging by few thousands ringgit per head for new registration exercise when government have not announced the pricing.

The malicious lies against Myeg have gotten personal to the point of questioning the faith of a certain Director.

He has converted to Islam for more than 30 years and is more diligent in his practise than even born Muslims. Furthermore, a person's faith and deed is for god to judge and not by gullible mortal like us. [Repeating an earlier advise here].
at 1/23/2016 11:39:00 AM

Different tone these past few days? Anyways, they did outsource. Firsthand experience. I registered my worker in shah alam, a company from jb bagged the job at anggerik mall in 2011 which meant so many shits for me to do as the company screwed up, meaning "pekeja awak tak masuk sistem ni sbb syarikat ni subkon mungkin ekuipmen dia rosak".

Get your facts right bro.

MyEG is not a sole agent for permit renewal

Wonder where did this accusation of monopoly came about.

Are we contracted to.wrote only a certain subject? Hmmm ...