Malaysia does not need 1.5 million Bangla 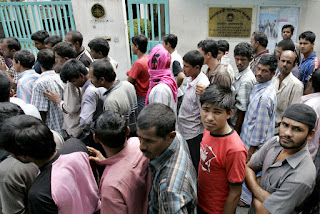 They are quick to pick the Malay language and within months are able to speak. Sometimes it is to the embarassment of certain races whose been citizen for few generations.

However, the plan to bring in 1.5 million into Malaysia is unnecessary. Even though it has yet to be decided on and some explanation given is that it is not 1.5 million one go but replacement of existing immigrant workers.

Till it is explained clearer, the idea of bringing in mass number of immigrant workers is not in-sync with the economic plan for high income economy.

Tun Dr Mahathir was one of the early proponent of the model. He used to highlight an important aspect of the model and that is the high income must come with increase productivity. It is only a fair expectation.

This have been said many times that Malaysia has to move from the low cost producer economic model to high value added economic model.

At the micro level, the thinking must be away from the high labour input to more machinisation and machine, equipment and automation to replace labour.

One can observe the few number of workers used but highly mechanised operation and expansive acreage of agriculture in the US.

In the food retailing side, labour input can be cut by introducing self service, cafetaria style, and use of equipments in the kitchen.

Only restaurants are truly full service and provide high quality service level in which waiters are well trained and fairly well paid. Naturally, it cost more to eat at restaurants.

A matter of time, food outlets in Malaysia will have to live with the reality that they cannot rely on cheap labour anymore but have to look back at their business process and market segmentation. As Malaysians realised cost of makan luar is getting too expensive, they will eat out less.

In a matter of time or maybe closer as we advance further, gerai and hawkers will be a thing of the past. City hall will stop allowing such casual eatery to continue. These operators must upgrade - operate from proper facilities with right business model or be redeployed to work.

The keyword in the transformation to the high income model is to invest.

When it was first reported by TMI in August last year, Malaysian Trades Union Congress (MTUC) secretary-general N. Gopal Kishnam expressed disagreement to bringing in immigrant workers equivalent to the  population in Kelantan.

He was reported saying, "Local workers have no hope to find jobs as employers like to hire those they can pay cheaply.

"This always happens and Malaysia will not achieve developed nation status by 2020 where one of the goals is to raise workers' salaries."

In TMI's report yesterday, Malaysian Employers Federation (MEF) executive director Shamsuddin Bardan does any evidence or survey that showed Malaysian companies needed as many as 1.5 million new Bangladeshis with the softening labour market, severe drop in business and retrenchment of local workers.

“We currently have 2.3 million legal foreign workers. I doubt that in this economic climate, we can absorb 1.5 million extra foreigners on top of the existing ones. This plan will only work if we deport 1.5 million illegal workers first,” he was quoted as saying.

Malayan Agricultural Producers Association (MAPA) director Mohamad Audong also refuted the sector needs as many. The entire sector only employed between 350,000 and 400,000 workers at any one time. It's shortage is only between 10,000 and 20,000 workers every year whenever workers balik kampong.

MEF and MTUC believed that the so-called need for the so-called 1.5 million new foreign workers is motivated by greed and not necessity. Labour supplier nets in profit between RM3,000 and RM4,000 per foreign worker brought in. Another cashcow is the online services to process the applications.

This looks to be widespread inhumane activity of profiteering from the blood and sweat of poor people.

When the name Malaysia surfaced in international report of widespread human trafficking activites, we were defensive. Many months ago, mass grave of promised immigrant workers and family abandoned by brokers were found in the jungle at the border.

Have a heart to another fellow man. Lets not allow this act of offering false hope that actually put their life in danger. If we can't absorb them, then do not take them in and result in social problems in the country.
at 1/15/2016 03:00:00 PM

maybe you have not heard the "strong rumours" of how certain minister go berserk because his brother's company is not enlisted as the sole agent for this deal by the Bangladesh govt. He he he...it makes the Bangla scared at us even before they come....he he he. maybe he did it on purpose so that the Bangla be more disciplined...he he he.

maybe it is just rumours.

but very strong rumours it was.

No to foreign labour said...

Really who make this policy? Amazingly stupid.
There will be enormous social consequence as these 1.5 million males labour will have sexual needs.
If only 10 percent have liasons with malay women or indons or chinese women, what will be the outcome?
150,000 stateless children.

Anon 4:06 AM ... Immigration is a 100-200 year old history from the days of Tanah Melayu. Malaya had always had historial problem of labour shortage.

Anon 8:05 AM ... Have heard syndicate bringing in foreign professionals on labour visa. Major cost cutting ... alas Malaysian public will not report to authority if they encounter such happening.

Touch have not had a bangla deshi made a pass at us yet ... Wink wink