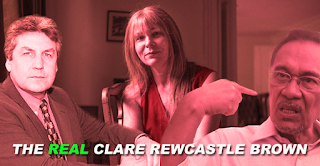 So when Soros name was traced as behind the NGO funding for early days Sarawak Report, it was presumed that Clare Rewcastle has links to Anwar. SR target then was Pehin Seri Taib Mahmud and the attack indirectly served PKR's objective to make in-road into Sarawak.

Never was it known that Clare had direct dealing with Anwar on matters of SR. The blog Open Source Investigation (OSI) revealed proofs of their dealing.

Two days ago, OSI revealed two e-mails which showed "Clare Rewcastle has long had a relationship with Anwar Ibrahim." She had been "working as a media advisor to Ibrahim, acting as his spokesperson".

The email reveal "how she sought his approval before running stories on her Sarawak Report blog" .

One of the email dated September 5, 2012, Clare Rewcastle sent an email to Anwar a copy of her email to the Royal Correspondent for the Daily Mail newspaper in London, Rebecca English.

She was acting as Anwar's spokesperson to undermine the planned visit of Prince William and wife, Kate Middle visit to Malaysia in their Asia tour in September 2012. Anwar Ibrahim called Clare as e his “media advisor”: 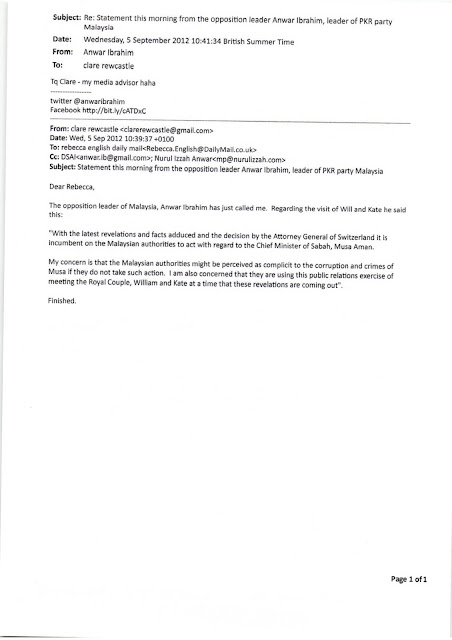 In another email, Rewcastle e-mailed Anwar on December 12, 2012 to seek permission to run a particular story. His reply was: “Please hold for now.” and Clare immediately complied: “Will do the interviews and then wait.” 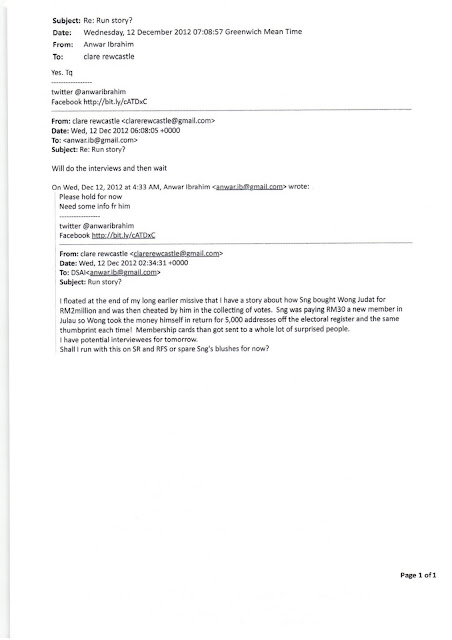 This new revelation adds a new dimension to the episode of Anwar's man, Dato Tong Kooi Ong and The Edge offering to pay USD2 million to Xavier Justo for the stolen documents of Petrosaudi, in which they did not after getting the documents. 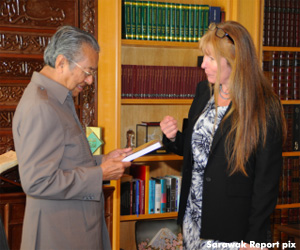 
We are setting up for one last crack before the state election… I will drink some when Najib is done… I have picked up the story through Anwar’s people… I have used Dr Mahathir to get other sources of information.”

In the picture above which looks to be Tun Mahathir's office at Yayasan Kepimpinan Perdana, Clare was seen with Tun M. Picture of her with current hatchet man for Tun M, Dato Seri Khairuddin Hassan can be found all over the Internet. Was Tun M aware of Clare's link with Anwar then?

ABITW's new year posting here mentioned of Azmin being too close with Tun M to the discomfort of a certain faction in PKR. Is there a cooperation going on the premise like the political cliche Malay unity? That could include the role of non political party, Perkasa.

With PKR officially in a coalition with Amanah but in a government with PAS in Selangor, is this the making of a new political party or coalition of party?

Better to read the whole OSI posting here which has link to posting on the collaboration between YTL's Tan Sri Francis Yeoh, Tun M, Tong, and Clare.

By now, believe police have interviewed Justo. And, he has filed a lawsuit against Tong in Singapore. Francis was said to have hired international PR agencies to assist the attack on Najib via foreign media. YTL have been villified as corporate villain for their ventures in IPP, 1Bertari.net and ERL.

Do not overlook this part of the political feud. The conspiracy and intent to topple Najib is undeniable so this is the other side to the issues of 1MDB, RM2.6 billion donation and SRC.
at 1/08/2016 08:24:00 PM

Even najeeb has direct dealing with j low...why he refused and lied?

Bro,
Interesting piece of info., perhaps for another line of story. However, it beats me la why the 2.6B line has become so complicated for Jibbo&Co. to explain - first, denial, then yes, it went into his account but not for personal use, then yes, it was a donation from a camel herder with no name for umno, but it was never captured in umno's account; til now, no explanation on how much was used, what's the balance and where it is kept...real insult to anybody's intelligence la...

Anonymous said...
This comment has been removed by a blog administrator.
1:17 PM

Before or after GE 12 and it started at the Ijok election, Anwar started the slander to accuse Najib's involvement in the murder of Altantunya. One can see the involvement of foreign funded NGO like Suaram and foreign media. Interesting that Tun Mahathir used the same line of Anwar's story to try revive the same accusation using Sirul's disappearance to Australia.

The confirmation of the link between Clare and Anwar embarassingly shows Mahathir following the game Anwar started. Though Mahathir is dilligent, hardworking and make effort to find out on issues, some say smart but in the field of political manipulation, it looks like he is no strategist but mere pupil to Anwar.

However we are not suggesting to support Anwar for Prime Minister. He is strictly populist politician and does not have ability in put together cohesive and visionary strategies. Too playful in the widest sense of the word.

Both underestimated Najib. After relentless attack by Anwar and now Mahathir is joining the fray, he is still there and unshaken. He bites back in a silent way when one least expected. He is not entertaining all these but still holding on to his plan. Something to ponder.

Stick to the subject. Dont waste your effort on personal attack and cheap politics. It never got published. Anyway thanks for reading.

Anonymous said...
This comment has been removed by a blog administrator.
5:14 PM


"She was acting as Anwar's spokesperson to undermine the planned visit of Prince William and wife, Kate Middle"

What is the subject? 2.6 billion or conspiracy?

These world super capitalist is making tonnes of profits through plundering and speculative ways.

Those fundings could either be a sign of repentance or part of a future ploy to plunder more.

One thing for sure, investment is not a fun but the fund spent will bring a lot of fun if the return is guaranteed.

So far not so good but please be patience and by topping up more funds, there wiil be more to guaranteed.