If MB Kedah is to be changed, hopefully it be ...[updated] 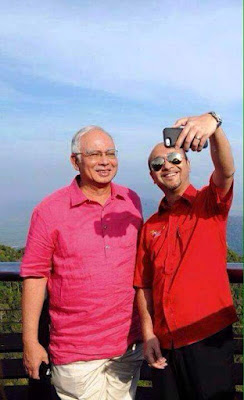 Have not commented on the Mukhriz coup and will not.

Only thing we are will say is Dato Mukhriz knew it was coming. If we could see from afar several of his wrong initial moves and remedial actions that need done but was not done, how come his staff, or inner circle or advisers or elders could not see and advise him?

Many are blaming Dato Ahmad Bashah for organising the coup. Well .. before this there were several attempts already. If it is not Bashah, it would have been anyone. The unhappiness have percolate to the ground for quite awhile.

All the arguments put forward by pro-mukhriz and protun people in conversation and debate on the coup have been purely academic and mere formality.

The situation is untenable for him to lead the state.

It would be a sad ending for him as he could have been the next layer of core leaders of this country. If he is insistent of not taking up any federal position, his politics could end here.

While we disagree with Tun M now, it does not mean there is anomisity towards Tun M or Mukhriz. He Mukhriz remain a friend.

Whether he vacate tomorrow or undergo the state assembly process, he should respect the party directive. 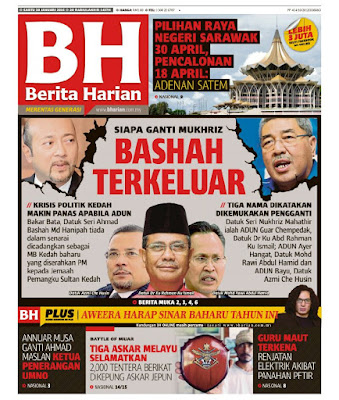 The talk was there were some names presented but was rejected by the Royal Council. However, such happening have been denied. The paper have put up the above names. One rumour going around is the investiture will be Monday tomorrow.

By the look of it, that may not be possible but our reliable informer said, the saga is supposed to be short and any resistance will be over in a week or two. We will have to see ....

What is heard is that it is decided that Dato Mohd Rawi of Langkawi will be next MB?

Rawi is a good man and was one of the trusted exco member of Mukhriz. As we understand from Kedah politicians, businessmen, civil servants and even the Langkawi folks, he may not be the better choice.

There are reasons why he is not appropriate but we are not going to say. We will butt out.

The upstairs need to find out themselves and decide. They are supposed to do the vetting. Furthermore, the process to come to a choice is not so simple.

Given to us and the many other rational and concerned UMNO Kedah leaders spoken to, the following is our preference: 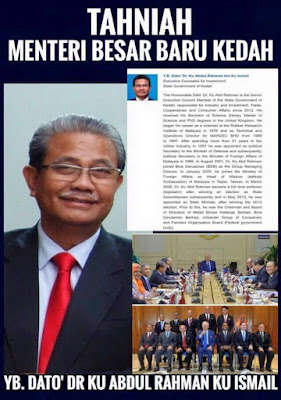 Kaghut dia ada but no one is perfect.

He is the best choice on paper and experience. Should appease all the various interest groups except the power crazy, and manipulative Dato Ahmad Lebai Sudin.

If Ku Rahman is not the answer to Kedah's leadership woes and still cannot stay there long enough, then we'll put it on record that Kedahan does not deserve a good and clever leader. What happened to Mukhriz happened in almost the same manner to Tan Sri Sanusi Junid.

Kedah deserve the predicament they are in because they are not thinking right.

True that leadership is not based on who is the most knowledgeable and the best reciter of the Quran  but on acceptance of the jemaah. However, this is a different thing all together. It is about politics to put a leader that will institute good governace and bring a better life for the people.

Unfortunately, the process towards that as practise by the political jemaah is the not so dynamic kampong politics!

Mukhriz is too urban and too much an outsider to them. Pity ....

The newspapers frontpage today are focus on two issues from Kedah. Firstly, Dato Mukhriz's strongly worded statement to warn the ADUN and 14 Kedah UMNO leaders for being disloyal to the Sultan. The statement below: 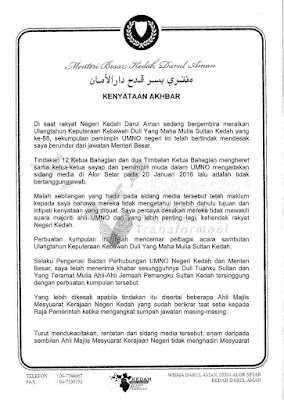 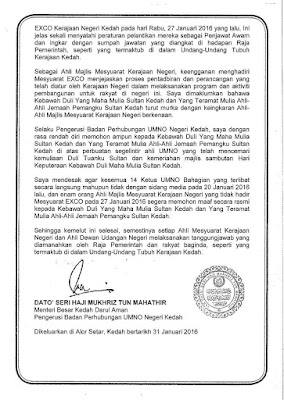 A commentator raised a question of the letter:

Sinar Harian and Utusan Malaysia believed Mukhriz's leadership fate rest on the meeting today between the BN elected rep and Kedah regency Council. One SMS from a Kedahan came in to express below:


"... the Kedah royal household may be doing a big disfavour to the people of Kedah by wanting to examine the true sentiment among the elected reps as reported in The Star today. If the federal government does not support the Kedah government the people will ultimately be the victims of the decision of Majlis Memangku to uphold its constitutional rights tq."


It has two implication. The Regency Council should take into account the interest of the federal government i.e. party leadership interest.

The meeting serve the purpose of understanding the feeling of the people as indicative of the position of the elected rep. Will they be meeting all 14 at one go or each one by one?

Certainly, not by having such shallow approach to gauge people support as below: 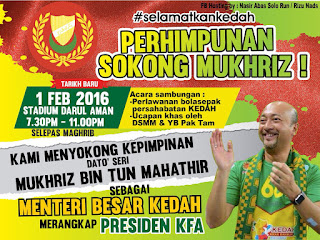 Show of support to Mukhriz have been lukewarm. [Read Catatan Zabidi here.] Even during a talk in Sangkang, Jerlun last week, only 400 attended and the number was aided by at least 100 outsiders, noticably from Perak.

The initiative tonight seemed a last ditch attempt to display some numbers. How will that serve the purpose when the poster is clearly targeted to bring in non-political young football fans?

Bro do u even know what percolating means? For a while i thought i was reading bigdog, you know using big words and latin looking all intellect. :-)

People like to sound arabic these days. Perhaps now islam is the preferred approach since 90% of the chinese votes are not coming back. U know it, i know it, we all know it. Call it a spade a spade, gentleman.

Thats why words like jemaah, like u said above, ukhwah islam, fitnah etc cropped up very often these days. Got no problem with those words as the meanings are clear. But we all take unfair advantage on these. Acceptance of jemaah? Haha. Well, a thief will always accept other thieves. Birds same feather, remember?

Dont worry those are all analogies, dont hang me for that.

Why not ahmad bashah wait for next term? Just ask najib to not name mukhriz and all is well. Afterall you said it out loud mukhriz has no solid base in kedah? So by not naming him for next election, solve all problem. And ah for lebai as well. Why the rush?

This case not like sanusi's or osman aroff's. Get that right first.

Ps- adenan should be worry and if he is politically clever, he should start his moves now. He is very outspoken on many things and putrajaya dont like that. And ah zahid said if they love adenan then translate that into vote. Mind you sarawak people, going by what happening in kedah, there is no guarantee adenan will be there once you voted for him. Politic is dirty.

Like the Kelantanese, aint the Kedahans supposed to be the Scottish of Malaya..politically, economically and socially self sufficient...They do not need a Duke from far away Pahang to decide for them who should be their leader

Please make a wise selection.
The MB of Kedah should be someone who is:

Without each of the above....it's just a waste of time.

Anonymous said...
This comment has been removed by a blog administrator.
12:34 PM

Anonymous said...
This comment has been removed by a blog administrator.
2:54 PM

Stick to subject matter. Trolls will be removed. We run a decent blog here. State your opinion but cut those bullshit.