Was told royal not the "jerung" this time 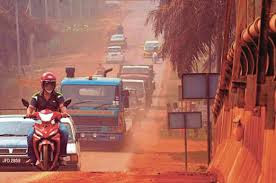 From the days of Tengku Wong exploit of timber in Pahang in the 1980s, we have been prejudicial of the Pahang royalties in the exploitation of natural resource to Chinese taukeh who shows no concern for the environment and public life and health. [read RPK here]

When it was heard a member of the Pahang royal member was involved in the mishap in Cameron Highland that was as a result of environmental neglect, it came as a no surprise to us and in fact, we expect it to be so.

The rumour was Tengku Asmawi was involved. There have been no denial on this widespread rumour. And there have been neither any result of investigation made known nor any action thus far. So figure out yourself.

We were passing through Kuantan several months ago, when the red dust in the air, on the roadside and surrounding oil palm plantation were beginning to be noticeable, it dawn on us as to why no action was taken despite the visible pollution.

It is a far cry from the condition today but the immediate prejudicial assumption made then was the possible involvement of the palace or royal family.

Upon our return, we bump into a member of the Pahang state exco at a massage therapy session run by the blind. We raised what we saw and his reply was they can't do anything because certain matters fall under the federal government.

He is implying as though state has no power to make federal government department carry out their enforcement work. We didn't argue back though couldn't buy that argument.

We remembered of an environmental incident which involved the then Selangor Director of Department of Environment (DOE), who happen to be a friend. Supposed to have a meeting with him but delayed by an hour and half as he had to coordinate an incident in Port Klang and get the media brief immediately.

When we finally meet up and he had to buy lunch for being late, he said, "Sorry bro, I have to address this before Khir Toyo come after me."

So we still believe that the state DOE answers to the MB. If not, Khir Toyo is a better and firmer MB than Tok Nan.

Anyway the Pahang exco member may be in a bind to say anything till matters can be sorted out. Our reply was simply, "Last election Pahang was faced with a fictitious radioactive environmental issue in Lynas and yet you guys can't handle it well. Do you guys wanna face GE14 with another and a real environmental issue?"

We left it at that. His answer definitely could not convince us no Sultan or other member of the royal family involvement. 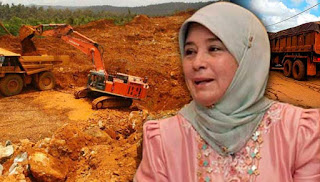 Tengku Puan of Pahang, Tunku Azizah Maimunah Iskandariah expressed her concern on the Instagram. The report on FMT was taken into consideration but yet we are still not convinced. This is Pahang one is talking about!

The former champion of the Lynas slander, Fuziah Salleh has already spoken. It is only political opportunity to be seized upon, It would be dumb of her not to. The Lynas issue raised her profile and with Chinese solid vote, it has helped her win the Kuantan Parliamentary seat in the last general election.

Environmental issue from bauxite mining will help her retain the seat.

Already, there is a viral video of Joget Pahang 2.0 uploaded last month that implicated the Sultan of Pahang as the concession owner.


It has all the signature and suspiciously could be the work of PKR. They have no fear or shame to get their fact right before spreading such accusation. The video exploited the negative perception on the Sultan.

Politically, they knew it will eventually turned back to make UMNO look bad as they will be perceived to be in co-hoot for submitting to the whim and fancy of the Sultan.

What was known was that the mining was done on private owned plantation land. When PKR is in, there will always be lies and manipulation. It backfired on us as it made us reconsider.

Today the issue has broken out.

The mining has been suspended for 3 months. It is known that the mining was allowed despite no proper facility at the Kuantan Port.

Many taukeh investors were in for a quick kill. So the reason they complain on the 3 months suspension. These taukeh have no soul and conscience but only concern for quick money!

Till today, four officers from the Pahang Land and Mines Department (PTG) including a PTD administrative and diplomatic officer have been charged for bribery. [Read The Star here]

After repeating the same mistake as in the Lynas issue, Pahang MB has finally spoken. FMT report below:


Adnan: ‘I made it clear bauxite would be a big problem’ 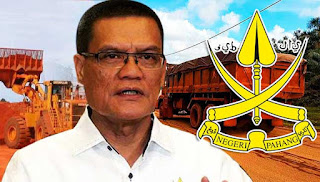 “I don’t want to play the blame game, but the fact is that all the enforcement agencies, except the Land and Mines department are under federal jurisdiction,” the Pahang Menteri Besar told the New Straits Times in an exclusive interview.

Adnan maintained he played his role as the MB by contacting stakeholders to resolve the issue and at one point even shouted at transporters in a meeting and threatened stakeholders.

The problem, however, he admitted “was just so big.”

“There was never a time in the state executive council meeting that I did not discuss this issue. I even made it clear that bauxite would be a big problem for the state and this is true,” he told the NST.

Adnan also said he did not seek help from the Federal Government initially as he wanted to resolve the issue himself within the state government’s capacity.

“I didn’t see it pertinent for me to seek help from the federal government. The state government had tried to handle this issue on its own but it was a failure.”

He later said that if the state had control over the sector, like in Australia, Pahang would not be facing the present problem.

Looks like, action was only taken when it came out in the press like in the Cameron Highlands and residents has resort to vigilanteeism.

Despite what Tok Nan said, thus far, only action taken is against officer of Land and Mines under state authority. The perception is state officers will not do anything against the Sultan or member of the royal household.

State officers are well aware that politicians come and go, but the Sultan and Royals stays forever till death only change them with other royal members.

Nevertheless, Tok Nan may have a point.

Why federal enforcement agencies only come in after the media made it into a buzz? Why not when MB has raised the issue repeatedly, DOE? 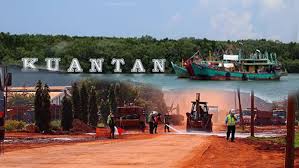 Royal or not, we are still wondering as to what happens after 3 months when the suspended licenses could resume. Will there be stricter system in place on Bauxite mining? To cover the eye of the "mudah lupa" public, the bureacucrasy is expected to make such statement.

Hope the Kuantan folks not be easily fooled.

Ask as to why it was allowed in the first place. The enforcement agency must investigate that first. Geogologist experts are aware of the adverse impact on the food chain. There have been experience with bad effect of bauxite mining in Johor.

If the authorities are vigilant as happened in Penang to stop illegal tantalum "black gold rush", it could have been avoided. Did anyone interfered in the process of governance?

Who is the jerung or big fish mentioned to be involved as mentioned by MACC Director for Investigation, Dato Azam Baki in the interview with NST? Can't be just any corrupt Tom Dickhead and Hurry PTD officer at the PTG.

If a royal is involved, he can still be investigated into and have charges filed against him. Take a leaf out of Spain

"King Felipe's 50-year-old sister is one of 18 people on trial after a six-year investigation into the Noos Foundation, a charity run by her husband Inaki Urdangarin, that prosecutors say was used to embezzle millions of euros in public funds."
http://www.reuters.com/article/us-spain-princess-idUSKCN0UP0MT20160111

Last year one pahang prince promoted Sultan Ahmad Shah Environment Trust (SASET) as recepient of fund raised during a charity dinner in honour of the sultan. Maybe the prince should come forward to make the announcement that SASET will use the money to cleanup the environmental degradation from the bauxite mining and reveal the names of the taukeh partners. Do apologise to the rakyat for the hardship and illness caused.

The MB can be a case study of how a leader ought not to be. He is a good example of a pretender getting caught out again and again and again. Yet the people still tolerate him. Pahang must be void of leaders. Pahang is doomed.