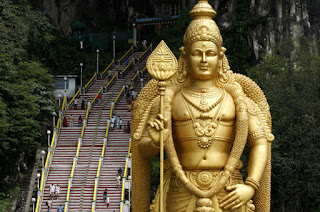 On Saturday, the Mrs and her sister made a visit to the neighbourhood pet clinic to attend to one of their ill cats. Her sister started small talk with the Keling Hindu vet, "Will you be praying at Batu Caves on Thaipusam day?"

"I already did yesterday. Doesn't have to be on Thaipusam Day," he said. "I'm worried if anything happen. More so, if all of us go (referring to another Keling vet), who will attend the clinic and the sickly animals coming in and already at the clinic."

Such thoughtful and kind-hearted Keling.

These vets really loved animals. One can see just by the gentle and loving manner they handled the animals. Even problematic animals just melt into their hands. Vet learn and trained to handle all animals.

Since Thaipusam was mentioned, the kind-hearted Hindu vet used the opportunity to express and lobby his concern for the planned cable car for Batu Caves. He hope they do not go ahead with the tourism development but justified to assist the old, sickly and handicap.

The vet's concern was for the unique species of monkeys and bats found in the caves. Construction will destroy the fragile environment and their habitat. Bet no one thought of the animals.

As far as security, it was under control. Police did good job in handling securities. 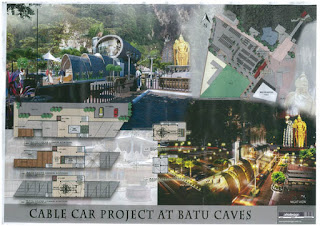 Work for the planned cable car was stopped by the local Majlis Perbandaran Selayang (MPS) authorities in June 2014 but MIC hope to continue.

Its president Datuk Seri Dr S.Subramaniam said the two major projects which had been delayed were the construction of a Hindu cultural centre and the construction a 250-metre cable car service.

He said the federal government had approved an allocation of RM2 million for the centre in 2012, but the project was not approved by the Selayang Municipal Council (MPS).

"Meanwhile, works on the cable car project were stopped by MPS on June 6, 2014 as several structural buildings around Batu Caves were said to be built without permits.

"If the state government deny us the approval, they are hindering tourism development in the state," he told reporters after attending Ponggal celebrations at the Sri Subramaniam Temple in Batu Caves here, tonight.

By the look of things, MIC is setting up a political confrontation with the PKR-led state government. Astro Awani reported:

BATU CAVES: The government will not build any cable car facility at the Sri Subramaniam Temple in Batu Caves as the location has been found unsuitable to facilitate the project there.

He said, the new facility will consider the disabled and sick people to the temple.

“The main objective is to build the cable car, but there are problems involving several quarters, including government agencies at national and state levels which have disapproved the development of the project.

“We will continue discussions and will get reactions on the impact of ecosystem and environment that need to be thoroughly analysed,” he said at a media conference after the 2016 Thaipusam celebration here today.

Prior to this, Selayang Municipal Council has issued a notice of termination for the development of the cable car project worth RM10 million citing unstable soil conditions with adverse impact on safety.

The project was granted to the Calcutta-based company, Damodar Ropeways.

More on MIC's plan to go ahead in The Star here.

If there is the confrontation, the rhetorics will be PKR refuse to help the Keling Hindu. Have no compassion for the old, handicap and sickly. Deny BN to bring development to the Keling community as the collection will go into the maintenance of the Batu Caves temple complex.

Not to mention old issue of PKR government past approval for condominium development next to the temple land will be resurrected.

PKR side will reply with their own environmental justifications. Elizabeth Wong will spread her environmentalist Keling friends to protest. Some creative bloke will cook up allegations of corruption in the contract award.

People are sick with politics. Let the temple people and MPS discuss and plan it out. Politicians should just butt out. The view of stakeholders like the kind-hearted Keling vet should be taken into consideration.

Engage all the stakeholders.

Some purist will want to temple be left alone and the ardous ritual to climb up the hill to remain. By making it easy to climb up, it will defeat the spiritual purpose. Surely it should not be changed for the sake of tourists.

Religous ritual should remain as it is in its purist or archaic form. Does it always happen?

The Kavadi carrying ritual now are not as free for all as before. There are now limits on the length of the spears placed through the tongue and cheeks. Kavadi-bearers are trained and certified for their health and spiritual state.

Haj practises is no more in its purist form of pilgrims walking or going by camel to the field of Arafah, stopover at Muzdalifah and stay over at Mina. They go by buses and there is a speed train built by Malaysian contructor.

Even the path for 3.5 kilometre to and fro saie walk in the Masjidil Haram was expanded and modified for convenience of the old, handicap and sickly.

The large number of visitors cannot be ignored. Maybe it could be considered but it is for the Hindu community to decide.

The construction cannot take the sensitive limestone environment of Batu Caves for granted. No risk should be unnecessarily taken in the construction of the various erections for the cablecar. Human lives should not be put at stake for monument building.

Best to have it built away from the existing stairs and at different part of the hill with path created to reach the temple.

As far as the concern of the good Keling vet, is there any way it can be done as his concern is the noise from the construction will turn away the unique species of monkeys and bats? If there is something spiritual attach to the presence of these animals, it cannot be taken for granted.

In case any Indian readers are annoyed with the reference to them as Keling, should read back this previous posting here, among others. They should be proud of it.

First of all, the Malays give the land for hindu religious purpose not for tourism.Secondly idolatary is strictly forbidden. The huge patung is very much against mmodern and secular malaysia. Those who approve the patung is committing syirik. This sin can be clearly be seen every day. Where are the alamaks who spy on lovers in apartments and hidden places? The alamak love spying on semi nude women but here a patung and the harussaini and utusan and berita harian alamak are silent. But will this attract IS followers?
Secondly the oku and handicap take the dkfficulties in climbing as penance for their sins. It wont be the same going up in luxury coach.