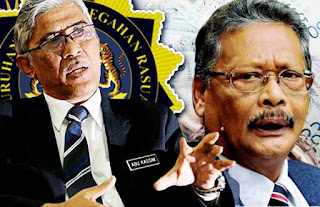 And the last thing should happen is to see the system screwed up because of politics (in the general sense of the word), slanderous perception game, and personal issues.

MACC has come through to the public request or some shall we be more precise to say, pro-UMNO supporters' demand that Guan Eng be investigated.

Subsequently,  MACC announced in a press statement that it has completed investigation on alleged impropriety in Guan Eng's purchase of his Jalan Pinhorn home. [One can find it here.] The reason for the statement is probably hinted in MACC's latest statement on openness and transparency here.

However, the last three sentence-paragraph ignited an uproar by certain segment of the public. An old blog from the days of toppling Pak Lah, Master Dedah took offense and accused MACC of undermining AG. [Read it here].

This anonymous blog begin posting on the Jalan Pinhorn-Taman Manggis issue in April. But turned into an MACC-watcher when they wrongly accused a Penang MACC officer trying to do a cover-up for Guan Eng. MACC have explained where it is wrong.

Master Dedah's latest posting in their defense of AG and attack on MACC was so elaborate that it could be misconstrued as them trying to pressure MACC Commissioner, Tan Sri Abu Kassim to resign.

It is quite typical of Malaysians in Malaysia of politicised issue simplified by a certain party as Dato Najib or his boys are behind. Consequently, Najib will be conveniently blamed.

As Ramadhan draws near, we want to be healthy and in a peaceful state of mind. Making mountains out of mole hills is not a step in the right direction. We are taking a hands off on this. Do not want to get carried away and offend people unnecessarily.

The three sentences have it's implications and opens up to a lot of possibilities. Cracking our head over it is something we are not going to do. Prefer to see issues within the scope of the issues.

One will be limited or constrained by publicly available information. As that confidante advised, "There is a lot that you might not know."

That is also true.

It is improper to drive to any form of conclusion before the process of eliminating possibilities have been done. Malaysians have tendencies to wrongly conclude or accuse just from one or two incidences. There are usually many missing links in their views.

Yes u are definitely right brother. May we have all the sensible minds and be more responsible to public. May Allah bless you and our friends out there and together helping this country to progress

problem is, the top person in this country is saddled with the biggest corruption scandal ever. like what Singapore authority just announced, the money laundering money assisted by BSI executives is the biggest in the world.

have you read what BNM wrote to Hassan.

“Humans can increase their degree of freedom through knowledge. Abu Hamid al-Ghazali says: "Man has choice in what he knows and is choice-less and externally controlled in what he doesn't know", which means that whenever his knowledge expands, his freedom increases.
Dr. Mustafa Mahmud