Because Rosmah is involved as a patron, not in any executive role, the Permata program became a magnet for political attack. To get at the PM, pick on the wife. The old Mafia had  a code not to touch the family in any inter-family war but Malaysian politics have no honour. 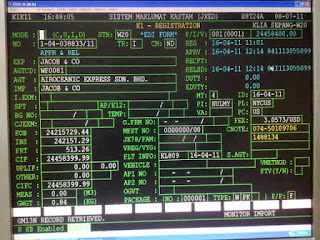 Sometimes we wonder why the program was called Permata or precious stones. Not so many years ago, she was embroiled in a controversy. Some joker within the Custom's Department spotted a package addressed to Rosmah at the PM's private residence in which was written: 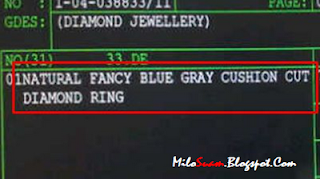 Without giving a second thought, the snitch within Custom's presumed Rosmah had bought a RM4 million "permata" and leaked it to CheguBard.

He is the vagrant that is hitting at Tun Dr Mahathir for alleged fake signatures of the Deklarasi Rakyat put together by former pro-BN facebooker, Ratu Naga. Rumour of her is she is allegedly a cyber blackmailer.

Quite unfortunate that these are the kind of people in Tun M's team these days. How sad and pathetic. Hope our pro-Tun friends not get personal. It is only politics. Tun M treats everything as the impersonal politics. Chegu Bard hits at anything and anyone linked to Azmin. The pregnant Ratu Naga is just collateral damage.

Back to the diamond story. Chegu Bard was merely manipulating on the ignorance of Malaysians to the practise of private viewing and private sales in the high end diamond market practise. Rocky's old posting of 2011 has Apanama defending Rosmah and come complete with video statement from Jacob and Company.

Despite denial by a pentaksub and a vehement ANC, there are still dumb dumb out there still picking up on this issue as a psychological warfare attack on Rosmah.

Because Rosmah is involved, Permata has seldom been wrongly accused. They accused Permata of monopolising government allocated budget for welfare when the allocations announced annually is meant for all and Permata's budget is quite normal in sum.

Permata was also criticised for focusing on only gifted children when all along program for kanak-kanak pintar is only one of many. They had program for the masses.

We are quite aware because our cousin is one of the trainer. She has a doctorate in children development from a UK university.

Despite all the cheap politics hurled at Rosmah, we are just glad that she ignored the shallow minded noises and persevere. The Star yesterday reported Permata given internationally acknowledgement for her work.

Permata to receive global award for its achievements


ISTANBUL: Permata, the brainchild of Datin Seri Rosmah Mansor (pic), is getting a 3G Children Welfare Award in recognition of its achievements.

The Prime Minister’s wife, as patron and staunch advocator for children’s welfare since the implementation of the programme in 2007, will receive the award on Permata's behalf during the first Global Good Governance Awards (3G Awards) 2016 cere­mony at Hyatt Regency Hotel here.

Cambridge IF Analytica executive chairman Prof Humayon Dar said Permata, which focuses on efforts in promoting talents and other leadership qualities in children, attracted a large number of global polls, defeating other nominees in the same category.

He said the award was in recognition of the excellent work Permata had been doing for the past few years, and would highlight its success at the international level.

“There are few examples for this kind of success, and I must congra­tulate the Malaysian Government and Permata for taking up this important issue.

“We would like other countries to look at the success stories of Permata and emulate this model.

“I think this is a good service to humanity, coming from Malaysia to showcase how talent can be nurtured from an early age,” said Prof Humayon....

Read further the Bernama report in The Star.

Permata Negara was truly the diamond in the rough that have begin to shine. It is not about trying to bodek her or PM or trying to extract favour or dedak. We believed in the cause all our life.

Some political numbnuts out there will dispute the award. Maybe because it came from an Arab country and thus linked it as Arab business partners of 1MDB. And maybe dispute it because it is Rosmah. Let the numbnuts stay as numbnuts forever because we need to progress and move forward.

Rosmah puts it in the right perspective when she was reported by The Star saying, "I think this is something or a phenomena where this award can inspire us to work harder and think of a new sector or programme for children in Malaysia."

Hopefully she explore to take up on the plight of the Orang Asli in Semenanjong and other minority Bumiputeras.


Sometimes back we put postings on the film Redha on autism and the Autism Awareness Week events. By now, the public should be aware that autism is another of one of many cause celebere of Permata.

Here is another piece of good news. We were told of this last weekend that the Redha team had just returned from Cannes Film Festival.

In case, there are still numbnuts at it cooking up cheap potshots at Rosmah, they should at least about the reason behind the making of Redha. Sundaily titled their review as Giving voice to autism. While, The Star highlighted about the plight of parents with austistc kids. It is true and we have had the experience of seeing friends' being in denial of their children's disabilities.

To address the problem is disabilities, it needs early detection and that is what is being advocated by Redha. By not being in denial, everyone - doctor, teachers and parents (at least the non-denial other half) can help children with autism or other disabilities.

With the effort of Permata, there is greater awareness towards the need to help children with learning disabilities so that these diamonds in the rough could play a role in society and perhaps glitter as achievers. By the way, a reknown artist had expressed intention to take up our Little Najib under his wing.

It seemed some filmmakers have problems appreciating the need to send some of our films to Cannes. It reminded us of film director, U Wei's comment as told by his friend about popularity and indirectly commercial success. Taik attracts the most flies but is still shit.

To be commercially successful internationally, do we want our filmmaker make movies on internationally popular same sex sexualism or anti-Islam themes?

Just because some of the film was no box office success in Malaysia, it should not negate the need try send this film abroad. One small time filmmaker we have regular neighbourhood teh tarik with could pick-up n his US-educated daughter's tip and foresee the need to pursue the market abroad.

So people ... there is such a thing as "private viewing" that make allow for diamonds in the rough to glitter.