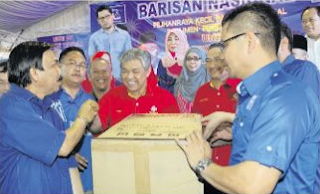 The difference is DAP lost Telok Intan because headquarter insist in putting a candidate not accepted by grassroot. BN may have candidacy issue. If Dato Jamal run or Noh Omar is in his usual self to strengthen his power base than winning elections, no Telok Intan will happen.

The picture and the media report of the visit on Tuesday indicate there is also an internal issue within Sungai Besar. However, it is not only UMNO or BN that will or want to run but have no confidence of winning. All the interested opposition parties have similar issue.

In the few conversations we had with our sources, that seemed to be the case. PKR or Amanah or PAS or DAP may not say so in public but they are saying they can't win in private.

Sundaily is helping to promote PKR to run for the Sungai Besar seat and pressure PAS and Amanah to quit.

What is also said in private is PKR too is not confident to win a straight fight. Scott Ng in FMT expressed the view that PKR may not win because of internal strife within.

Anwar's recent statement at the court to confirm his letter to warn against playing to Tun Dr Mahathir's tune will start the war between Wan Azizah and Azmin. Wan Azizah side may want to see PKR lose for the sake of shaming Azmin.

Only sure where Rafizi is heading. There is already talk that he could lose his Sec Gen post. He is beginning to be a liability with his inclination to twist, turn and slander.

Azmin already expressed the view to wants PAS into PH but Wan Azizah opposed it openly. Naturally, Azmin is indebted to PAS for helping put him as MB. He also acknowledged that PKR need PAS for numbers and machinery for effective political campaign.

PAS have clearly stated their stance to run in both Sg Besar and Kuala Kangsar where they have been traditionally running. This have been repeated several times.

The common view is PAS will not get the Chinese votes. They also knew it thus the view BN will have an easy win over them. PAS's insist in running in their traditional area. So the insinuation by Tun M that PAS is giving an easy win to UMNO.

Dato Nik Amar pretend not to understand as he argued in kampong comprehensible language that since they are running, it will not be giving an easy win.

PAS cannot not run. It will be a dead giveaway that PAS is in collusion with Azmin. Pro-opposition commentators are already concerned with PKR's dangerous flirtation with PAS. There is no such thing as being half pregnant with PAS.

Dato Ibrahim Ali share the same view with Tun M and suggested PAS only run in Kuala Kangsar. Despite denying Perkasa will follow Tun M in his by-elections campaign, the common inclination between Ibrahim with Tun M and Azmin is glaring.

Ibrahim could be leading the way for PAS in the same manner Sun and Mat Taib is doing. After all, it is believed Ibrahim the politician is cosying up with PAS for another chance for them to give way for him to run at Pasir Mas in the next general election.

In anticipation that the negotiation between PKR and PAS will breakdown, Amanah has already announced they will run in both Kuala Kangsar and Sungai Besar.

The impression is Amanah will be there wherever there PAS is running. It happened at Betong Maru, Sarawak so they have to be consistent enemy of PAS.

Amanah have to maintain the perception that they are a strong ally of DAP and are ideologically at loggerhead with PAS. However, there is a sceptical view claiming Amanah is just a political party for the losers in the last PAS party election to have some role.

Their role is speculated to maintain "PAS" relationship with DAP without PAS having to bear the burden of being associated to DAP. In turn, PAS will build up relationship with UMNO and use the "perpaduan ummah" platform to win over UMNO supporters to PAS.

The hypothesis claimed that PAS will pretend to be at loggerhead with Amanah. To maintain that script, PAS claimed Amanah is running at Sungai Besar just to destroy PAS and not to destroy UMNO. Same pro-UG attack.

It is mere theory but currently, Amanah may have a chance in the event there is a three corner fight against PAS and UMNO. They could get DAP support to woe the Chinese voters. Fairly logical but can it be done with Mat Sabu as candidate?

Ibrahim Ali, Mat Sabu old friend from ITM days, laughed off Amanah's chances. Amanah knew it that with only one or two branches in Sungai Besar, Mat Sabu will only be an entertainer at Sungai Besar.

In Sungai Besar, the Javanese is an important factor. Mat Sabu talks in northern accent. The vote kampong folks only buy local produce.

DAP is not running in Sungai Besar. It is a Malay majority or more precisely Jawa majority area. However, one of the state assembly seat, Sekincan belongs to DAP. He can speak Javanese and have some influence.

The state assemblyman is Ng Suee Lin. The person that made an issue of former MB and assemblyman for Sungai Panjang, Dato Dr Khir Toyo's house in Shah Alam. It was Khairy's boys that started it but Ng "finished" the job for them.

Our source with contact in DAP claimed they have no confidence in Pakatan Harapan to win. Is it because they have made up their mind to avenge what happen in Sarawak in the event of PKR is the candidate?

DAP could be taking a back seat after Sarawak and current onslaught against Lim Guan Eng. However, they remain vocal against PAS and Azmin's initiative for backdoor negotiation with PAS.

The negotiation with PAS have revived DAP's call for the three PAS exco to resign for not giving way to PH. DAP knows PAS machinery is dependent on the Selangor state government appointments. So Azmin may have lied in his denial of the threat to PAS.

By the look of it, DAP could only give their support to Amanah.

Chinese did deliver some votes for BN in the last general election. If the promises were delivered, BN could still pick up some Chinese votes. However, there is the possibility that Chinese voters would just stay away then take any chances to commit with any one in this time of uncertainty.

Pro-Tun knows they cannot win if they were to put up any candidate. They do not have time to get a candidate and put a machinery together. It means they also believe they could not win.

They did try to approach someone. Just because he had to face imprisonment and now parole is up, it does not mean he should be like the pro-Tun to stand against BN. That someone supporters are supporters of Najib. Running and losing will destroy any slim chance of a comeback or to absolve him from the prison sentence.

Mat Ghip mana suggested this? Should have done some homework.

The role of the pro-Tun now is only to "kacau daun". Tun M have already call on his supporters to make sure BN loses. He asked the voters not to vote for BN. Politically, Tun M needs a BN lost to negate the momentum built from the BN Sarawak landslide win.

Pro-Tun may have bought into some armchair political analyst at some ivory tower saying the two by-elections are BN's true test of strength. Indicator maybe, but true test not quite so. If opposition loses, they could kiss their dream of power goodbye.

To some UMNO supporters, Tun M is acting as the new opposition head. It means Tun M have no loyalty to the party.

He was never concerned for the party but only to his selfish agenda or cronies. Repeated many times and in many different forms, he wants Najib to follow everything he said. Loyalty was the theme is the recent 70 years anniversary celebration of UMNO.

Nothing like a good Sungai Besar kampong lunch for Thursday. Sungai Besar by-election should be a fun one to watch from afar.
at 5/26/2016 12:01:00 AM

my take in this is simple:

Another option is just to let the patient die. This is simpler thing to do. Just let UMNO lives with the stage 4 cancer, eventually, sooner than latter it will die. That is what the general public view this days, even with the once strong on the fence voters like me.