TOKYO: Barisan Nasional will adopt the “campaigning without the candidate” strategy for the Kuala Kangsar by-election, as Datin Mastura Mohd Yazid is observing iddah (the waiting period following the death of a Muslim woman’s husband).

Deputy Prime Minister Datuk Seri Dr Ahmad Zahid Hamidi said the strategy took into consideration the fatwa or edict that was a requirement according to Islamic law.

“We have consulted several Muslim scholars including those who are members of the National Fatwa Council, besides discussing with Perak Mufti (Tan Sri Harussani Zakaria) to clear the air among differing views on the matter,” he told the Malaysian media here.

Dr Ahmad Zahid said several methods had been sought to introduce Mastura to the voters, including broadcasting recordings of her speech at all district polling centres and targeted locations, besides non-verbal communication.

“Rest assured that we have well thought out this strategy to ensure that due respect is given to Islamic law and hope that the voters, comprising almost 60% Muslims, will understand the needs of the situation,” he said.

The Deputy Prime Minister said the campaign strategy was also made known to the non-Muslim Barisan component leaders to enable them to explain to the voters.

On the acceptance of Mastura by the voters, Dr Ahmad Zahid said the Barisan candidate had her own advantage as she had great experience in national politics.

“She mixed around with the electorate when her late husband (Datuk Wan Mohammad Khairil Anuar Wan Ahmad) was the Bukit Chandan assemblyman and later the Kuala Kangsar MP in 2013.

“I am confident she will be well-received compared to other candidates,” he said.

Dr Ahmad Zahid stressed that the current controversy over the Private Member’s Bill to amend the Syariah Court Bill (Criminal Jurisdiction) in Kelantan would not affect the support of non-Muslims.

“Before a Bill can be approved and enforced, it must go through seven stages, which includes getting the approval of the Parliament, Senate and the Conference of Rulers.

“All the processes would take a long time. I hope non-Muslims will not worry too much over the Bill,” he said.

In Kuala Kangsar, the Election Commission called upon all parties to “campaign like gentlemen”, reminding them to be respectful towards one another as it was the month of Ramadan.

Its secretary Datuk Abdul Ghani Salleh also warned campaigners, especially outsiders, against resorting to acts that could provoke the locals.

“This seat is vacant because of a tragic event, so please be mindful. Respect the families and the residents here.

“My advice is to not touch on sensitive issues and don’t slander others,” he said.


Good advise though from Election Commission.

If anyone not notice yet, the general public is suffering from political fatigue. Not sure whether it is applicable in Malaya, but the recent Sarawak state election could be sending out signal that the public had enough with politics of hatred and slandering.

Other than the RBA or pro-Tun (including Ratu Naga) or other aggresive cyber groups, the majority of millennial voters are tired of politics selak kain (exposing personal issues). Not to be left unnoticed, the cyber political landscape or more accurately, battlefield have changed. We are not telling but observe it.

For the two by-elections in Malay majority areas, it will be conducted in the month of Ramadhan. Those involved with Kuala Besut by-election should remember how costly disaster it was for the then PAS VP, Dato Husam Musa-led PAS election machinery for sticking to aggressive campaign.

The anonymous but interestingly revealing blog, Gelagat Anwar felt that it is a poor start to a psychological warfare campaign. This is a political campaign ma ...not psychological war for the hearts or mind.

OK fine, any political campaign will involve some level of psychological warfare.

Blogger Jas Salleh was even more critical as he called the political strategist rude and idiot (biadap dan bebal). He is entitled to his opinion and anger.

One pro-Tun blogger called on BN to withdraw. He claimed the choice of candidate shows BN lack any candidates.

Excuse the fella because his posting is representative of the koman (simpleton) grassroot UMNO thinking and seldom borders on shallow logic. However, he was made popular by pro-opposition news portal and believed to be paid by a soon to be former UMNO leader. 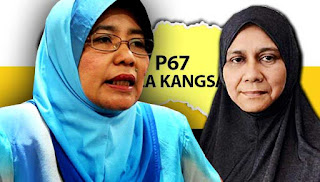 Picking up on the sentiment or common (or koman) opinion amongst UMNO grassroot, former UMNO leader, Dato Hamidah Osman felt it was a joke to put a candidate that cannot go around campaigning.

The former Wanita Information Chief and now supporter of an new emerging political faction of Tun M-Azmin seemed stuck in conventional thinking. Actually she is not. She is aware how influential and respectable the late Dato Wan Khairil, thus it is useful to the hard working and helpful widow.

Only reason that was speculated by this blog here is she is considering of taking her chances to run. Hope she does not because it will be the end to the end of her political career. Fight only the right battle, Midah.

It is not a joke for no show by candidates at elections. Manoharan ran for DAP while in prison. A former ADUN for Perupok, Bachok was hospitalise during the 2004 general election. In fact, UMNO used to claim to be able to win by just pasting UMNO posters and putting on songkok and selendang.

There have been many occasion of widows running for election at husband's former seat. In Sarawak recently, Irene Chang and Datin Janet Lau ran at their late husbands' seat at Bukit Assek and Pelawan, Sibu, respectively. PBS's, Dato Linda Tsen ran in Batu Sapi after death of husband in 2010.

And not to forget Datin Wan Azizah in Permatang Pauh and Langkah Kajang move to replace Anwar though he is still alive and well in Sg Buloh.

The difference is Mastura is under Iddah. but in actual fact, it is a non issue.

Iddah does not mean, the should be imprisoned in the house throughout 4 months and 10 days. Otherwise, who is to buy food at the market or send schooling kids to school or lessons and tuitions? More important, the wife has to still go to work to get money to keep the family going.

It reminded us when arwah father (May Allah bless his soul) passed away in 1984. Some smart alec sekolah ugama teacher (may Allah bless her too) tried to be smarter than the Mufti that interpreted the hukum Iddah to us.

Mourning in Islam is not as what was practised in the past. It may have it's own reason and wisdom but different times may warrant different practise. Actually, if one consider Mastura as continuing the good work of the husband or seeking employment from the voting public, personally, we see nothing wrong with her campaigning.

Anyway since it is politics, quite often it is not about right or wrong but what is perceived is being right and wrong. It needs some pandering to popular thinking or the loudest of thoughts. Still need to stick to conventional expectation of voters, specifically the conservative elders.

It's fine, it's political reality but there is always many ways to skin a cat.

Using videos and social media is one way.

If Ahmad Maslan is smart, which we reckon he should since he is a Deputy Minister of Finance and for many years the Information Chief of UMNO, he should explore to rent transponder from KL and use technology to the hilt.

Still finding it strange that it is "orang UMNO" that is making so much noise on the Iddah issue and not PAS. It is really misplaced political correctness.

Sometimes non-conventional ways can bomb out as happened to Sarah Palin. But still, aren't they bored of the same missionary position?

Anonymous said...
This comment has been removed by a blog administrator.
2:57 PM

Iddah is not about mourning but biological reason.

In the event they had sex, 4 months 10 days is timely for the widow to confirm she is not pregnant in case she intend to remarry.

The son of Nuh climbed a mountain to escape the flood and was destroyed.

The mother of Musa put her newborn son into the river and he came into no harm.

The difference between the two?

SAHIH INTERNATIONAL
11:42 And it sailed with them through waves like mountains, and Noah called to his son who was apart [from them], "O my son, come aboard with us and be not with the disbelievers."

SAHIH INTERNATIONAL
11:43 [But] he said, "I will take refuge on a mountain to protect me from the water." [Noah] said, "There is no protector today from the decree of Allah , except for whom He gives mercy." And the waves came between them, and he was among the drowned.

SAHIH INTERNATIONAL
11:44 And it was said, "O earth, swallow your water, and O sky, withhold [your rain]." And the water subsided, and the matter was accomplished, and the ship came to rest on the [mountain of] Judiyy. And it was said, "Away with the wrongdoing people."

SAHIH INTERNATIONAL
11:45 And Noah called to his Lord and said, "My Lord, indeed my son is of my family; and indeed, Your promise is true; and You are the most just of judges!"

SAHIH INTERNATIONAL
11:46 He said, "O Noah, indeed he is not of your family; indeed, he is [one whose] work was other than righteous, so ask Me not for that about which you have no knowledge. Indeed, I advise you, lest you be among the ignorant."

SAHIH INTERNATIONAL
11:47 [Noah] said, "My Lord, I seek refuge in You from asking that of which I have no knowledge. And unless You forgive me and have mercy upon me, I will be among the losers."

SAHIH INTERNATIONAL
11:48 It was said, "O Noah, disembark in security from Us and blessings upon you and upon nations [descending] from those with you. But other nations [of them] We will grant enjoyment; then there will touch them from Us a painful punishment."

SAHIH INTERNATIONAL
11:49 That is from the news of the unseen which We reveal to you, [O Muhammad]. You knew it not, neither you nor your people, before this. So be patient; indeed, the [best] outcome is for the righteous .

Being antagonistic does not make your argument stronger. Behave here ... no hostilities welcomed. Get lost please ...