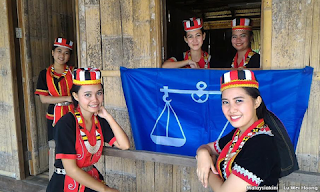 The traveling did help us to have a better feel on the pulse of Sarawak heartland. Still, it is still only a glimpse of the bigger picture.

Visited Iban longhouses. Heard the grouses of kampong people. Emphatise with the difficulty of the rakyat in the interior.

The challenges they faced with the transition of moving to a modern economy and encroachment into their traditional living.

Then we flew to Kuching for R&R and to watch the election development. The Kuching break were bit too long. Delayed by cancelled plans to go to Kapit and Mukah.

We then flew to Bintulu. If Miri is the oil town, Bintulu is energy town. One can find the Malaysia LNG plant and various high technology industries at Samalaju Industrial Park.

Samalaju is one of the industrial park of SCORE which is an economic sector developed from the renewable energy sources from the dams of Bakun and Murum.

A local employee in one of the factory in Samalaju claimed the electricity generated in Bakun is in sufficient for the need of Samalaju.

We made a long 189 km trip up to the two dams and stayed overnight at a small settlement or pekan of Belaga as they categorised it. Strange bureaucrasy denied us the chance to stay overnight at Bakun Resort. No walk-in registration. Only office hour booking allowed.

During the trip, we managed to visit a Kedayan community in Kampong Kuala Nyalau and a Kenyah longhouse near Sungai Asap.

We accidently bumped into a Kenyah BN Coordinator for a rumah panjang by a roadside coffee shop in a friendly and heated political discussion. He invited us to see his kampong and a new settlement he is working on.

Interestingly, he was almost on the money on his election prediction. The former PKR supporter predicted Belaga, Samarlaju and Murum to be won by BN.

He was spot-on on Murum. If not for the feel good Adenan fever, the BN Iban candidate could have won by whiskers. He knows all the three candidates intimately and acknowledged all as good people,
Kemena, the area our hotel in Bintulu was named after was also won by BN too.

After Bintulu, we cancelled our flight back to Kuching and instead took a bus to Sibu.

Have been to Sibu in the past for family visit and 2010 by-election. It was the Sibu by-election that DAP begin their good run till the general election of  2013.

Quite a shock that they emulated the same big finale in 2010 and this time around, the crowd at a parking lot facing RH and Wisma Sanyan across the main road.

DAP ceramah was only in Chinese  so we left for the Malay kampong at the end of Jalan Kg Dato to hear BN candidate for Nangka gave his fiery finale speech.


Malaysiakini was trying to spin and label Dr Anuar as racist firebrand. Oh please ... DAP and Baru Bian can be open about their Chinese and Christian interest but no such spin coming on them.

Despite the bang by DAP, BN did well to win few Sibu constituencies, Bawang Assan and Dudong. DAP won at Bukit Assek and Pelawan.

In the outer areas, there were friends involved in the campaign at Meradong, Pakan, Meluan and few other areas. Adenan Fever was really a confidence booster. Except for Ba' kelalan, we won all.

Ba's Kelalan was partly mistake and oversight on our side that allowed Baru Bian's win. Anyway, we still need a good opposition.

Saw someone commented that DAP failed to make entry into the interiors and with Dayak voters. It is quite right. Generally the sentiment we gauge was Dayak perceived the Chinese as economic oppressors and DAP gets the brunt of their dissatisfaction.

DAP's Manifesto does not help dispel the Chinese chauvanism stigma. It was clearly and subtly self serving.

Their reduction by 5 seats is being analysed. Chong Chen Jen attribute it to lower voter turnout. Partly true since there are protest vote or no show. Several theories abound. Some say it is atttiude and non-delivery. The impetus to such reaction is the comfort Chinese have with Adenan.

DAP knew they were losing as Lim Kit Siang was quoted saying Adenan will be re-elected. So their strategy was to focus on GE14 to play national issue. Dato Najib should be concerned with the possibility of voting BN for the state but DAP for Parliament.

There could be backlash to Semenanjung-style negative politics of DAP. Adenan Satem NTL policy on radicals could have been accepted by certain segment of Chinese. Candidates like DAP's Batu Kitang are just too abrasive.

Looks like another attempt for the Telok Intan formula failed again. The DAP Malay candidate was trying too hard to be more DAP than any DAP politician need to.

Be it Malay or Iban, let'ss not be deceived by DAP.

PKR's Batu Lintang application of diplomacy to win the heart of voters was useful. He acknowledged Adenan' leadership and plead on voters to vote him for a check and balance news

There was positive response to the new SUPP. They reinvented themselves and found relevance by voicing Sarawak rights. They are attracting the Sarawak for Sarawakians supporters. Autonomy is on the card to be delivered. Najib must deliver it to get the support for GE14.

Remembered visiting his modest family home in 2012 next to Kuching's Spring shopping complex. He was still fresh and newbie in his political approach then. The famous cardiologist and Senator has come a long way.  Seemed destined for higher position.

Bro,
I think it's Kampung Nyalau.

Adenan should replace najib as pm. As simple as that

I hope to visit Sarawak in the future. It's good to know more culture from that area. Thanks for sharing.