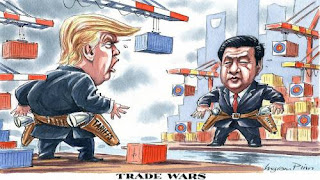 The news from the international media on the US-China trade war tend to highlight POSUS Trump's slapping one block of tariff rise after another.

It is as though China is helpless. Far from it as one message reveived from a former Merchant Banker reads....

The US has an unpayable National Debt of US$22.5 Trillion rising at the rate of $1.2 Trillion a year, plus an unfunded debt of $220 Trillion.

Another $21 Trillion are missing, according to ex US Commerce Secretary, Catherine Austin-fitts.

In contrast China has a US$3.65 Trillion war chest.

If China sells all the US Treasuries and buy gold its price will jump up like a scared rabbit and US interest rates will spike to at least 8% or more.

This will crash Wall Street, ushering in a new rolling recession.

The US$900 Trillion Derivatives Monster, a financial casino, based mostly on interest rates, will also implode.

This will bankrupt not only all the major US Banks owned by the Zionist cabal but also the German Deutsch Bank and British Barclays Bank.

On 26 March 2018 China launched the yuan-based crude oil futures contract in Shanghai and the sellers of crude oil can buy gold at the Shanghai Gold Exchange using the yuan.

That meant that the yuan was already de facto backed by Gold (via the back door) since 26 March 2018.

If China uses the US$3.65 Trillion war chest to buy gold she will have more than 50,000 tons of gold and once China backs the yuan with Physical Gold at say 67,000 yuan an oz of gold or equivalent to US$10,000 an oz (at the current exchange rate) the yuan will be the new World Reserve Currency as the US dollar is backed by nothing but hot air and the printing press.

Then, it's game over as the US will be a debtor nation like Argentina as the US dollar will no longer be a world reserve currency.

So what excuses Trump uses today to start a trade war with China can turn around to bite him at the Gluteus Maximus- backside.

But will the US take all this new developments lying down and pretend to play dead? No.

So be prepared for some deadly war games between the US and China/Russia.