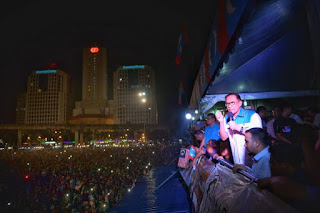 After an audience with Agong in the day time, he attended a political rally at Padang Timor Petaling Jaya at night. An estimated 10,000 attended but it is not his usual number of audience.

It was a rush job and furthermore, the next day Muslims was to begin fasting for Ramadhan. Malays tend to refrain from politics during the holy month.

There was nothing significant in the speech. The usual pleasantaries and complimentaries, including an odd one for Tun Dr Mahathir.

Almost all the winning Pakatan Harapan leaders were there, except Mahathir.  In place is Tan Sri Muhyiddin as token representation from PPBM. More so, they have been friends since student days at University of Malaya.

At that same moment, Mahathir was elsewhere ...

Hurdled at his home, he was in discussion with Tun Daim and five other worried faces, including one of his loyal media officer. Over the years since the late 90s reformasi movement, all had prominent roles.

As Mahathir listened, each vented out their their thought and view on the prospect of a freed Anwar. They anticipated he will soon get one PKR MP to vacate an easy seat for him to run for and win as MP seat.

Two years is not a long time and it will pass off quickly. Before long, it is his turn to takeover as Prime Minister.

Though Dato Saifuddin Abdullah acknowledged no specific schedule was mentioned for the transition as it will be agreed between Mahathir and Anwar, two years was the period agreed by Pakatan Harapan Presidential Council for him to carryout the promises to "Selamatkan Malaysia" so the claim.

Anwar had never been modest of his lifelong ambition to be Prime Minister. To any mortals, one prison sentence would have end their career.

The bigger worry for Mahathir and those present at the discussion at his home is that his premiership this time is not backed by two third majority, but only 13 seats in Parliament.

His position is dependent on the substantially more seats held by DAP and PKR.

If he get all BN MPs to jump to PPBM, he could get more than each of them, but the numbers is not enough and it is not politically feasible. Mahathir's list of those he do not want to be associated with is a hindrance itself.

More so, former BN Sarawak formed their own coalition GPS and are not with him.

So do some of the former BN Sabah MPs that formed part of GBS with Jeffrey Kitingan and seemed more as a platform for Christian political interest in Sabah. Mahathir is ruling them out.

If Mahathir could get people to jump over to PPBM side, Anwar could do the same.

He seemed unstoppable and destined for PM#8. Already holding the world's longest PM-in-waiting, Anwar have no intention to get by-passed at the finishing line again.

Not only Anwar is trying hard to stay patient, so do his foreign backer.

After going around the room to allow each to express their opinion, except perhaps the media officer, only will Mahathir speak. What he heard were worried voices and frustration expressed from the decades of fighting Anwar than suggestion or strategy.

However, no one mentioned any blame towards Mahathir for being in bed with the devil. It would have been expressed had he still remain an ex-PM, but he is now back as PM.

One of those present had once openly acknowledged himself as an UMNO man and has no issue with Najib flicking few millions here and there to finance politics.

In the days of reformasi, he had a prominent role. So he stood by Mahathir out of his feudel blind loyalty to the son of a Kerala born immigrant. In his heart, there could be a sense of regret to what has happened, but not expressed.

Mahathir listen attentively to their grouses and when all had their say, he acknowledged their concern, rambled few comments, and at the end, he murmered, "Susah-susah bubaq saja ...(If it gets difficult, call for a snap election).

The possibility of a snap election was the buzz for quite a while.

Both these leaders did not plucked the idea from thin air. One or both may have been told casually by Mahathir or his dealmaker.

In Sandakan, Lim Kit Siang refuted the possibility of a snap election. He challenged Mat Hasan to quit his UMNO acting Presidency in the event of no snap election and himself in the event there is one. No time line given.

However, it is all Kit Siang's style of political macho talk to quash the subject. 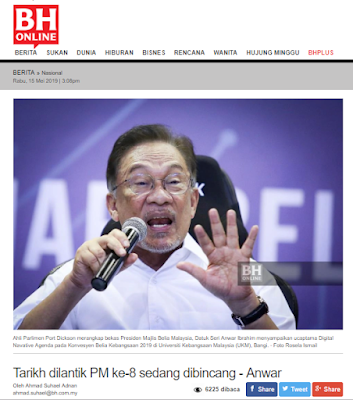 During Ramadhan recent, Kit Siang met and uttered the D word to Mahathir.

Kit Siang came with an entourage of five including Tony Pua, and Liew Chin Tong (iffy as he is now seen as threat by father's son) to pay Mahathir a visit at home on the weekeend of May 8-9.

The whispering on the meeting went viraled the following Tuesday.

Anwar told Berita Harian confidently and it got reported the next day, Wednesday that the his date to be appointed Prime Minister is being worked out albeit by DAP.

The polite words said was for Mahathir to announce his schedule for the transition.

In the meeting, it was crudely put by the autistic Tony Pua. He told Mahathir to announce now exactly when he will secede power to Anwar. It is supposed to be in the same manner Mahathir announced in 2002 to pass over all positions to Tun Abdullah Ahmad Badawi at end of 2003.

This was the reason Daim openly whacked Lim Guan Eng for ignoring and by passing civil servants.

He revealed that Guan Eng brought in some 20 political appointees to replace civil servants or shadow the heads of departments or agencies.

It is the same manner DAP did when taking over Penang. Daim questioned civil servants too but he knows without their cooperation, PH will be dead soon.

It was Daim defending Mahathir.

The subsequent reaction was a question from the media to Mahathir in Tokyo at during the Nikkei Conference Dialogue. He was asked when exactly he will be stepping down.

It is obviously a planted question. His answer was merely to reaffirm but with a new twist on the need to raise money for the country.

And PH been saying Najib put the country in debt and they will pare it down.

In Mahathir's words, he does not care what people are saying and will decide by himself.

That brought out a reaction from a staunch Anwar supporter, Abdullah Sani, MP for Ulu Langat. He reiterated the same question by the media when exactly will he resign.

Rightly so, Mahathir and Daim is trying to bring the narrative away from politics and to the economy.

But Mahathir is keeping them guessing on the time and when. One excuses after another is being given.

Kit Siang blamed him for foreign investors shying away from Malaysia, stock market and financial markets decline since May 9th 2018, and foreign countries no more friendly to Malaysia.

Typical of Mahathir to not admit his faults. More so, he is not in charge of any portfolio.

He has pre-empted to blame his cabinet team as incompetent and most obvious bunggling was Lim Guan Eng. It is hard for Kit Siang to rebut as it will fall flat on him.

However, Mahathir's back is being pushed to the wall. Time is running out and he has to make the move.

If Anwar is brave enough and not spooked by another possible court case for corruption or power abuse or sodomy again, he would be making his move more loudly.

At the same time, Mahathir has Tan Sri Muhyiddin Yassin to contend with. There is mutiny in Johor and the quarrel with Muhyiddin is out in the open.

Initially, Muhyiddin committed the political taboo to confront and question Daim and the legitimacy of CEP's actions.

In Sabah, Warisan too is unhappy with the migration of UMNO Sabah MPs, leaders and members into PPBM. There are aligned to Dato Shafiee Apdal's mortal enemy, former CM Tan Sri Musa Aman.

The Azmin, who was thought to be able to bring up to 27 PKR MPs to Mahathir side, could hardly bring 10 MPs and even 3 MPs only was mentioned.

Political observers already jumped the gun to assume the appointment of  Lathefa Koya as Chief Commissioner of MACC as a Mahathir's political move.

It is indeed a strategic political move, but ethically incorrect. Will get to that in later posting, but typical Mahathir, his important moves will always be a stone to kill several birds at one go.

If he call for a snap election, he will want to kill the whole flock of problems and constraints flying above his head. It will not be for UMNO and PAS to wrestle back power with somebody else at the helm.