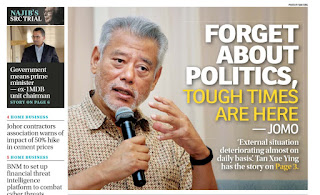 The frontpage of The Edge Daily reads above.

As much as Prof Jomo Sundrams wants Malaysian to forget about politics and return to it for the next general election, it is hard to divert public attention to the economic problem from the hottest, biggest and most revealing sex scandal ever.

Forget the law and court for a while, because as far as court of public opinion, Dato Seri Azmin Ali is finished.

The video of Haziq admitting to the homosexual relation and clearer second set of video is shaping public opinion, and no denial and diversionary attempt by Azmin will be of any help.

The report by an Australian media that the video was not altered and video of a videographer-blogger, 1Peluru sealed his fate from being the 8th Prime Minister.

Yes, lets take a break from the political scandal to ponder on the fate of the nation. 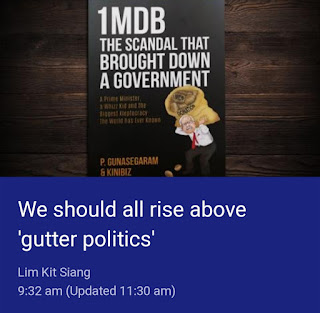 To spin the political scandal by the call to rise above "gutter politics" in the manner done by Lim Kit Siang in Malaysiakini yesterday, it is no answer to our economic woes.

For one, it is politically motivated in nature.

The "gutter politics" talked and discussed in the public sphere is internal PH politics and not linked by any way to BN or PAS as acknowledged by PH leaders themselves. Kit Siang should be making the call to his fellow PH politicians.

Kit Siang's used the example of Venezuela, once one of the 20 richest country in the world but now "poor, backward, broken and bankrupt state" to make public realise the fate of Malaysia to come.

But he refused to be honest on the fiscal policy mess arised from Lim Guan Eng's single handed decision to cancel GST and gave a three month tax holiday.

It is not Kit Siang to not talk of 1MDB and kleptocrsy and blame it for the nation's woes. He did and quoted the prison sentencing of Khadem al-Qudaisy and Mohammed Badawy al-Husseiny, who ran an IPIC subsidiary and squandered money paid by 1MDB to IPIC.

He politically directed blame to "MO1" and UMNO-BN without admitting his annointed Attorney General so-called attempt to recover the money through adversarial legal process will not do any better than the one "MO1" negotiated successfully with IPIC.

Tommy Thomas has yet to be able to prove any wrongdoing by "MO1" . He is struggling with the low hanging SRC case and will likely falter at the more complex and difficult 1MDB case.

Adding to their woe, the hired prosecutor, Dato Gopal Sri Ram is sickly with kidney failing and regularly on sick leave.

It should answer Kit Siang's complain of "the wheels of justice in Malaysia grind so slowly and tardily" because the Attorney General is practically incompetent and kept delaying cases!

With honesty and sincerity, Kit Siang should have lambasted his party for the Penang tunnel scandal and the Penang Transport Masterplan that is going to cost taxpayer some RM46 billion.

The PTMP cost more than ECRL and it is being pursued in times of economic difficulty and massive budget cut for the common folks welfare.

If he dream of a Malaysia capable of doing a Hong Kong style demonstration, it will be to ouster PH for their incompetence!

He can blame others for the “gutter politics”, which rely on "lies, falsehood, intolerance and hatred hidden in the race, religious and royalty rhetoric of desperate and bankrupt political leaders who could even use religion to justify support for kleptocracy and falsehoods".

It is only misdirecting blame from himself. Over more than half a century, he lead DAP and was the subversion operator applying all those gutter political techniques he mentioned! 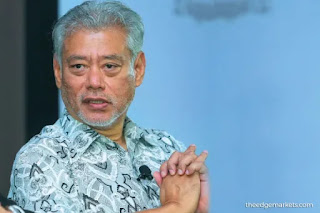 After a year in power, heaven sake, Jomo only realised this?

In fact, it is beyond just US-China trade that affected Malaysia but the serious outflow of capital and investment out of the country compounded by decline in ringgit value and fall in commodity prices and buying orders was domestically driven. 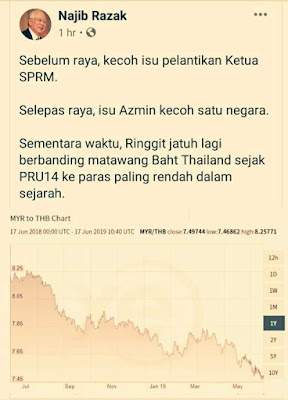 Worsening the problems are the pathetic foreign and trade policies of the new PH government.

In Jomo's attempt to re-direct public attention to the nation's economic woes, one journalist commented to yours truly that Jomo is practically saying his Chairman at the Council of Eminent Person and PM's Economic Adviser failed.

In a video that went viral, Dr Muhamamd Khalid confidently claimed there is no problem, all sorted and given time, will be solved!

Jomo should acknowledge that it still goes back to politics because the instability in politics and unreliability of public policy is a major contributing factor to the nation's economic woes.

Politicians are going beyond policy formation and intergered with executive decision.

For instance, Rocky Bru's latest posting hinted the possibility of Telenor-Axiata deals may not happen.

It could be typically another political U-turn in public policies and imply it is business as usual in Malaysia for politics to meddle in business and economic affair.

Rocky is not wrong to suspect so because Tun Dr Mahathir had earlier expressed reservation for the possible massive retrenchment from the Celcom-Axiata merger.

That was for public consumption but apparently, Mahathir was not briefed properly about the deal.

Before anyone think it has anything to do with Tan Sri Vincent Tan, he sold his interest in Digi for quite a while.

Mahathir was only briefed that the Telenor-Axiata is a 50:50 venture at the operating level but at the holding level, Telenor has controlling interest. This will not fit in with his old school mindset.

However, why should IHH be sold to Mitsui and now the first mobile operator in the country and third largest to fall into the hands of a late comer and foreign control?

Who is to blame for the control of Axiata by Telenor? 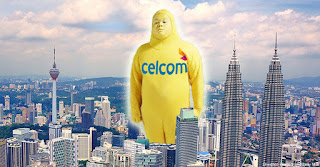 GLCs was supposed to be under the purview of Azmin Ali, but the appointment of Imri Mokhtar for Telekom CEO by Minister of Finance shows it is Lim Guan Eng that is both in charge and taking charge.

Azmin has been a disappointment as both Minister and politician in Mahathir's pact.

Mahathir's politics for the last three to five years take account of considerations beyond politics-for-politics sake. The current political happening should not rule out this possibility.

It is known that Tun Daim played instrumental role in the restructuring of GLCs, thus he could be involved. A source said it was Daim who sealed the deal.

Mahathir has stepped into realm of Telekom and appointed someone Chairman Dato Rosli Man preferred in Noor Kamarul Anuar Nurudin.

Apparently, someone professionally familiar with Noor do not see Rosli Man's preferred man as capable. Guan Eng's appointment was a better choice, but Mahathir is flexing power and applying political authority.

Why couldn't Azmin flex his muscle? 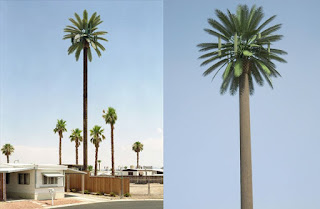 It made market players think foreign funds is back into the market. The Edge was even throwing the idea of Telekom returning back as a blue chip stock. 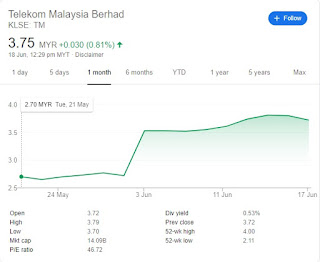 A seasoned market player believe it was China money that bought into Telekom and the reason was to spite at the "Jewish" Investment Banker for shorting the Malaysian market.

They took quite a beating from the transaction cost of going short and capital loss to the tune of millions daily.

Rocky's posting reported from the Norwegian Woods, the title of a Beatle song about a bird or girl that had flown away. If the Norwegian deal is off, it could be a China deal in the making. 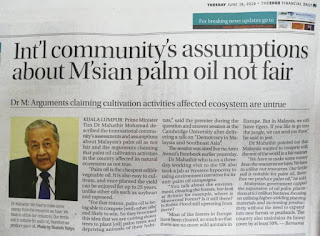 For one, the second page of The Edge Daily today reports Mahathir's defense of Malaysian oil palm.

Astro Awani's website reported Mahathir was going to use the Telenor deal to get Norway to withdraw their ban of Malaysian oil palm. Knowing Norway is part of the EU, they would decide as a group and the ban will remain.

Do not forget that Mahathir was laughed at for warning Malaysia will retaliate against EU for banning Malaysian oil palm.

This is geo-global politics at work.

As potentially the 8th Prime Minister, will Anwar dare to do such move and upset a foreign country to safeguard Malaysia's economic interest? 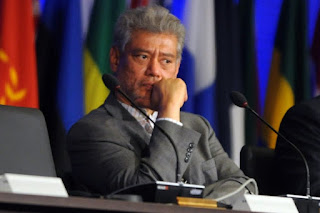 It means Jomo should shut his mouth and what is happening is beyond him.

The economic reality of Malaysia, be it domestic or international, is that it is tied up to political economy.

How could Jomo ask to forget politics?

Abitw Najib Rusmah are victims. Both never stole a single cent from us. Instead both worked very hard to earn billions since they were young. Their trial is simply Chinese jealousy of Malays becoming rich on Malay hard work and sweat. Thank Allah for a brave defender of Najib and Rusmah like you