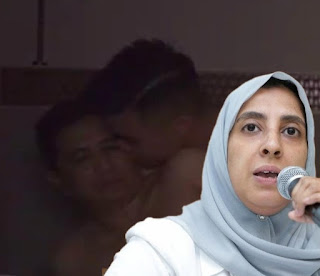 The meeting at Tun Dr Mahathir's home means DAP has thrown their card on the table.

Do not forget Lim Kit Siang said they will leave DAP should PH steer away from the reform agenda.

In not so many ways, DAP is deadset on their Malaysian Malaysia agenda to emulate Singaporean Singapore agenda and even the manner it is executed.

As far as Dato Seri Anwar Ibrahim, he has to stick with DAP because they seemed to be the last left still supporting him through and through.

Even in PKR, the reformasi agenda is losing steam and factionalism has even eroded his dominance in PKR.

Another reason Anwar needs DAP is because the DAP support is essential to get the support of the non-Malays MPs in PKR to be on his side.

Save for the like of Sivarasa, in which business interest has overtaken political ideology. He sided with Azmin and benefited from the legal work to his firm Daim & Garmany.

With partner, Latheefa Koya appointment as MACC Chief Commissioner by Mahathir, no reasons for him to chorus others view against her appointment. 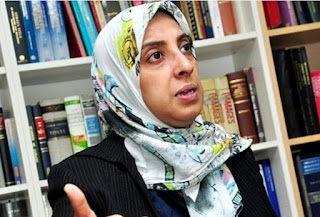 With no announcement from Mahathir on the scheduled transition of power, war between the Mahathir faction versus Anwar Ibrahim-Lim Kit Siang faction in PH was expected to erupt after Raya.

Not used to being on the defense, Mahathir fired the first salvo on the last week of Ramadhan and on June 1st before Raya with the appointment of Latheefa Koya as MACC Chief Commissioner.

It is politically a brilliant move because in one stroke, the feisty Latheefa was supposed to pressure  Anwar, worry Lim Guan Eng, and give subtle threat on Sarawak GPS with possible investigation or more Sarawak Report expose of Pehin Seri Taib Mahmud towards the upcoming state election.

For Guan Eng, it is the bungalow and tunnel cases.

Making such move just before Raya is always a good psywar timing for it to spread through conversation during Raya visitings and open houses, and the holidays allows it to sink in.

Though politically brilliant, it is ethically not correct and operationally improper for several reasons.

First and foremost, Latheefa Koya is a politician and the last place to put a politician is MACC. There is no more subtlety and basically an outright announcement MACC will be abuse for political expediency.

One young man was asked over Hari Raya of his view on the appointment. His reply was quick and conclusive, "Ah ... this is all politics la uncle. We had enough of it!"

Secondly, Pakatan Harapan campaign for independent appointment of such position and MACC appointment was to come under a bi-partisan Parliamentary Committee.

Mahathir ignored it and his acknowledgement that he did not refer to cabinet or the Parliamentary Committee or any formal group was him defiantly saying no one tells me what to do. It made Anwar looked like a fool to request for a clarification.

Thirdly, Latheefa will have a tough time and face difficulty to carryout her job. The position is not a Chairmanship position, where the important role is in Board meeting, but very operational in nature.

She has no law enforcement experience, not sufficiently extensive in her legal exposure, and never led any large organisation.

Tommy Thomas is a renown civil and constitutional lawyer, but yet struggle to make cases out of evidences provided by investigators such as MACC.

Latheefa will be responsible to find those legally admissable evidences for AGC to work on.


No blaming of Dato Shukri Abdull for any possible failure of SRC case as the ball is in the AG's court. MACC used to suggest only for 302 but they went 309.

To sum it, Lathefa's appointment is politics. She is aligned to Azmin's camp and represented Selangor government in the Ijok settler's land settlement which is suspected to be a land scam. It was investigated by MACC but NFAed under PH government.

Mahathir's action to appoint Latheefa should not be viewed in isolation. He had earlier over-ruled the Minister of Finance appointment of Telekom's new CEO. The message from him to PH is clear that I am the Prime Minister and I will call the shot from now on.

Anwar knew Mahathir has a strong grasp of logical thinking. He will always have the justification for his action. Tactical retreat was necessary before resuming fire. 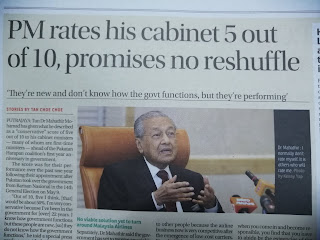 There have been rumour going around that Mahathir had been toying with the idea of a cabinet reshuffle.

When he denied and tried to convince his cabinet just made the passing mark, it means he will go the other way and do it.

It should be no issue to rearrange the cabinet to kick a few incompetents and add new faces such as Dato Mustapha Mohamed and Dato Mukhriz Mahathir.

However, the politics is quite delicate to preserve PPBM's presence, including maintaining MB positions they held.

The concern of DAP-PKR was he had to remove Datin Seri Dr Wan Azizah. She is no more PKR President and was replaced by Anwar, but Anwar is not interested to be Deputy to Mahathir again.

Someone need to be appointed, but the AI-LKS faction do not agree with Dato Seri Azmin Ali.

If anything happen to Mahathir, Azmin may decide to stay on. With power at his disposal, he has the political skill to gain the party and public support.

He did it in Selangor to come from behind to steal the MB position from Wan Azizah. DAP cannot forget that and they will not allow it to happen again.

DAP is not loud yet and Kit Siang was last to comment on Latheefa Koya. But the Red Bean Army and Zunar have been on attack mode against Mahathir since Latheefa's appointment.

Guan Eng directed them to go racial and instigate hatred and anti-Islam sentiment among Chinese to oppose the Mahathir move. It serve the purposes to fortify Chinese support and unify DAP against an incoming threat.

And, there is a hidden purpose to strengthen Guan Eng. He is rapidly losing support and popularity declined among Chinese for bungling on the fiscal policy.

Surprisingly, there is disgust among DAP members and leaders together with Chinese businessmen of his bigotry and racist treatment of Malays, major market to Chinese in retail, wholesale and services. 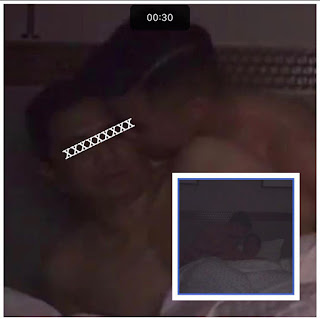 In a swift move against Azmin, media reported of a male cabinet member in the heat with another male yesterday morning. 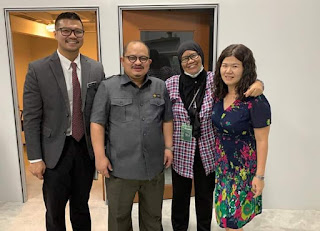 By noon yesterday, the videos went viral through private WA messages and groups. The identity of both Azmin and his partner, Haziq Aziz, SUSK to Dato Shamsul Iskandar was almost immediately known.


Without any opportunity to answer, Hazisq made a statutory declaration that went viral over night.

Azmin could not do the usual action of ignoring such allegation. Soon foreign media will report and the pressure to response is immense. Questionable issues will be forgotten by then.

A Ratu Naga tried to spin on Facebook by depicting him having break fast with Agong will not be sufficient. She twist facts and lies thus will never be believable. 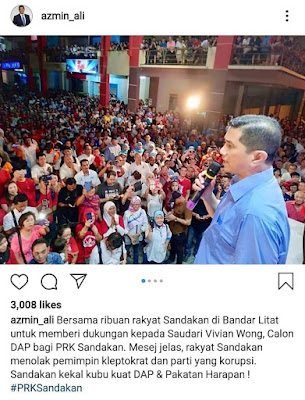 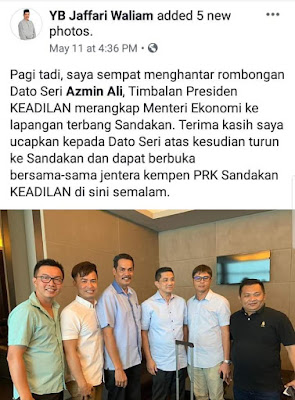 The hour to hour schedule has been accounted and there was sufficient time for him to campaign at the Sandakan by-election, romping at Four Points of Sheraton hotel, Sandakan and fly back for break of fast.
.
Husin Lempoyang has a humourous account of the sexual exposure. He ends his quatrains with the conclusion Mahathir stand to benefit and it could be him throwing Azmin under the bus.

While, Azmi Arshad sum the situation well in his Facebook:

Mahathir sends the shuttle to the back of the court: "Sorry lah, we don't have the manpower to investigate everyone (so we will only do selective persecution)".

Anwar sprints back to make a high jump smash: "If that's how you want to play, here you go.... a video of your blue-eyed boy. I learned this tactic from you."

Latheefa has no choice but to initiate investigation on Azmin.

She will be tested by Kit Siang's challenge to go after the sharks. He was the last to issue statement on her appointment. and it was carefully worded

It could turn out something or nothing, in which a negative will heighten DAP propaganda against her, MACC and Mahathir.

The gay sexual video was made into a police report by Dato Lokman Nor Adam Nevertheless, it will not be easy to make into a case. The person recording and the recording machine need be secured.

If UMNO remain shallow, they will play that line and forever be remembered as a party so keen on only sex expose. 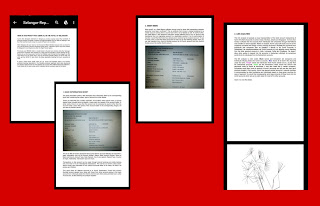 So it will come down to the 69 page Selangor Report exposure against Azmin, in which the bulk of the materials came from the portal Selangor Leak that has disappeared since GE14. 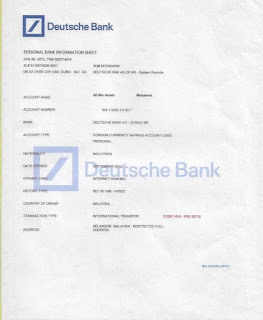 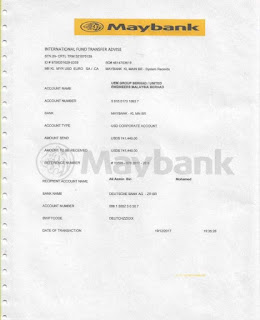 The exposure went viral together with few other sex scandals of Azmin during the fight between Azmin and Rafizi for PKR Deputy Presidency.

Azmin scrape through with the help requested by Mahathir. There was no way Azmin could survive the move made by Dato Sng Chee Wah through son, Larry at Julau.

It has to be the work of Rafizi and viral again by RBA. 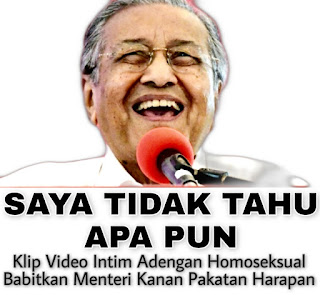 This episode could temporarily hold back Mahathir from appointing Azmin as Deputy Prime Minister and do a cabinet reshuffle.

He will have to rethink his justification to deny Anwar the premiership on moral ground because Azmin is no better.

That is what Anwar wanted and that is to avert the appointment as it will make it tougher to manouvre.

At his late age, Anwar cannot be too rough with Mahathir as it will attract sympathisers and revive his popularity. More so, Anwar's ability to lead and manage the economy is in question.

Anwar will want to wear down the old dictator to the point he absolutely tak larat (cannot bear it any longer). He need to gain the confidence that he will not pursue the old man, his family and wealth upon assuming power.

He knows Mahathir has the trump card to dissolve Parliement and the outcome is uncertain.

For the time being, it is a stalemate and mere jostling between Mahathir's and Anwar's boys. Mahathir will stay on till the direction is clear.

No doubt Azmin's exposure balanced the in-fighting in PH for the time being.

However, Latheefa still has task on hand against Guan Eng, Najib and other UMNO leaders, and possibly Taib Mahmud to prepare for Sarawak state election.

So they will find a way out for Azmin. It is a matter of whether it is acceptable and make sense.

In the meanwhile, significant issues like the Inquest on Adib, Tommy Thomas ineffectiveness as AG, NEAC important decisions, and even Latheefa's controversial appointment is forgotten to a sex expose.

Stalemate or dissolve Parliament?
1) Even if Parliment dissolve PAS-UMNO + OtherBN coalition still not strong enough to unseat divided PH.
2) Tok Mat's UMNO had recently called for exclusion of all UMNO leaders implicated and charged for offenses. Is'nt this what TunM and TS Muhyuddin was calling out to UMNO during early days 1MDB expose but was not taken up instead they were thrown out.Out of this desperation that they did the unthinkable ie to allign with the then opposition
3) Tun M' led PH did the impossible feat of winning the election and proof that the majority of rakyat although slim is with him even with him allying with the old enemies.
4) Now after 1 year as govt it is obviuos TunMs old enemies are still his enemies. But the UMNO he defeated has come to its senses under Tok Mat and the rest including KJ.
5) Now is the time for all UMNO-PAS-otherBN parties to stretch out the Unity Ummah concept to other Malays in PH-Warisan , Amanah, PKR and others and really kick the bigheaded nons out of the govt.