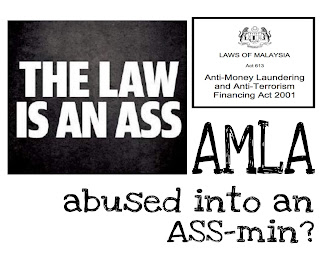 It is often claimed the quotation, "The law is an ass" came from the legal genius of British legal system, Lord Denning. Apparently, it is not.

The quotation, as Wikipedia puts it, means "The law, as created by legislators or as administered by the justice system, cannot be relied upon to be sensible or fair".

In Malaysia, government MPs simply aye all laws proposed by government on the instruction of the Chief Whip, which under BN, was Tan Sri Muhyiddin Yassin and subsequently replaced by Dato Dr Ahmad Zahid Hamidi.

The law drafter may have given enforcement agencies too much power to the extent junior officers could abuse the law at will. However, the blame has to be with the whip system, which insisted voting is done along party line and decided by party leaders.

This is all leading to concerns and critiques of AMLA or the civil forfeiture law. 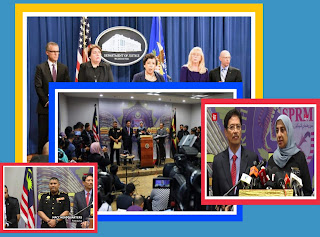 It came about out the first impression of the first PC by new Chief Commissioner of MACC, Latheefa Koya to announce the civil forfeiture on 41 accounts alleged to have illegally received money from 1MDB.

The PC seemed to emulate the then US Attorney General, Loretta Lynch announcement on the civil forfeiture and investigation into 1MDB.

Latheefa's PC was meant to also be groundbreaking but turned out not. It was noticeable to see the handsome MACC Commisioner, Datuk Azam Baki momentarily aged.

In the meanwhile, Director in charge of  AMLA, Muhammad Zamri bin Zainul Abidin could not hold back his glee. 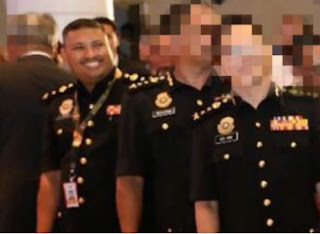 There have been gossips of Zamri, the former MACC Chief, Dato Shukti Abdul's trusted man.

He had allegedly applied AMLA to freeze accounts at will in the Sarawak's Operasi Gergaji, failed in his investigation resulting in MACC embarassing loss against Dato Mirza Taib repeatedly and Dato Latiff Bandi, pursued Tan Sri Musa Aman on long debunked Michael Chia allegation, and now in the lurch following Shukri's resignation.

This posting is not about Zamri repeating the same modus operandi to freeze accounts at will, but often ended up with nothing.

It is beyond Zamri, who seemed to have gained weight lately due to water retention, or life has been good. To gain attention of Latheefa, he was accused of illegally securing handphone evidence of a former Minister.

Although Zamri may have wrongly advised Latheefa to make himself relevant, this posting is about the problems of AMLA and more problems it created to the public, including politics and economy. 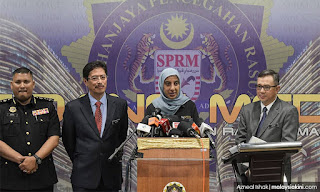 The latest civil forfeiture against 41 individuals, political parties, and NGOs attracted critics, negative comments, and even sniggers and laughters at Latheefa.

Zamri's mamak survival instinct, but yet incompetent, will have bearing on Latheefa. Off course, she is still learning the ropes and acceptable to make mistakes.

Her announcement on the civil forfeiture and warning the 41 not to talk to the press are odd. It is usually done by AG or DPP. The law have yet to be amended to separate public prosecution role from AG and allow MACC to undertake prosecution.

At one Hari Raya open house hosted by a senior member of the legal community last week, civil forfeiture became the subject of conversation.

An ear witness sat quietly as a mouse as prosecutors and judges ridiculed and passed disparaging remarks in the manner AMLA was seen as abused, misinterpreted and enforced.

It only look bad at Latheefa as all this is happened under her watch. Guess that could be the concerned look of "aged" Azam. In a face saving statement, Azam told media there are more names and more will be slapped with civil forfeiture. 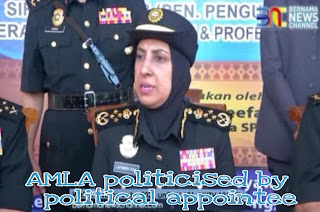 The political arguments against the latest civil forfeitures ranged from the use of AMLA as political tool, malafide intention to bankrupt UMNO, and insensible freezing the accounts of bona fide businesses and service prividers.

Mentioned in the SRC case is Arab donation deposited into Dato Najib's accounts, thus the need to establish whether it was 1MDB money and not Arab donation. However, AG seeked third postphonement of 1MDB trial to October.

Bung Mokhtar claimed the move is selective prosecution. The recipients list have been an open secret for many years but why 41 only and not 408 as once mentioned by Shukri.

If all UMNO division heads received money, Zamri should have frozen the accounts of almost all the PPBM MPs that used to be UMNO MPs, and UMNO MPs that crossed over to PPBM!

For that matter, a tweeter posting claimed Tun Dr Mahathir received RM10 million and personally collected by English Channel swimmer, Dato Malik Mydin at Najib's home. There is a rumour going round claiming the total amount is RM30 million.

The civil forfeiture has politically backfired. Lim Guan Eng claimed the list is more than 41 and that invited Gerakan to raise the name of Muhyiddin, Mukhriz and Shafie.

What kind of leader is Mukhriz as then UMNO Kedah Liaison Chief to claim ignorance?

They relied on Guan Eng to defend money did not go into their accounts. How did he know? Tan Sri Annuar Musa said the trio would be dragged to court.

In Raja Petra latest posting, he wrote all politicians should not pretend not to know of the large amount of money used for general election.

Everyone did it, but only now UMNO kena because Mahathir dendam. He was no angel but a skillful operator himself. 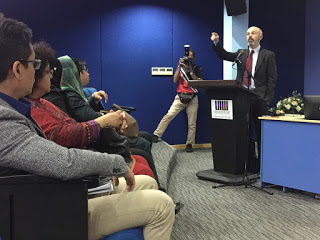 It is timely to link back to a December 2017 posting HERE on a talk by an American attorney and former Harvard professor. Thomas C Goldstein on civil forfeiture at UiTM.

As taken from Bigdog HERE, the last para in DOJ's June 15 2017 press conference that revealed on the 1MDB debacle briefly and accurately described civil forfeiture action:


"A civil forfeiture complaint is merely an allegation that money or property was involved in or represents the proceeds of a crime. These allegations are not proven until a court awards judgment in favor of the U.S."

Criminal cases require proof beyond reasonable doubt to be judge guilty. Civil cases is based on on-balance probability. Both criminal and civil case require court judgement to prove guilt before any sentencing on the persons charged.

Civil forfeiture is neither criminal nor civil in nature but quasi civil and criminal. It does not deal with any person, but money. and is meant to prevent money suspected from criminal means from being taken out and evidence disappeared.

AMLA allows investigating officer the power to freeze suspicious accounts for few months. Subsequently, AG could freeze it up to a year, in which upon expiry, there must be a charge made against them. Failing which, it has to be released.

To extend the retention of the forfeiture, without going through the ardous task of criminal prosecution is to do a civil forfeiture similar to the one done on the asset seized in Najib's home and Pavillion condominiums. 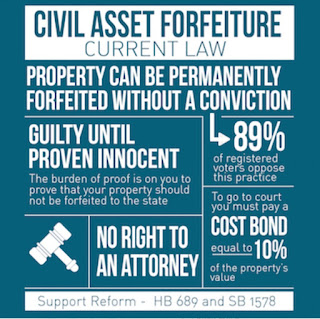 That move on Najib is correctly done under AMLA law. So does on the 41 accounts, but it is unfair, insensible and gross injustice.

It denied Najib and the 41 accounts access and use of the money. Constitutionally, it is denying the rights to property and infringing human rights. Where are the human rights lawyers?

It is likely Latheefa wrongly used AMLA for political purpose. The suspicion is that it was to deny Najib the money for any political comeback. It leads to the likelihood civil forfeiture was abused for politics.

The reason is simply Dato Najib and Datin Seri Rosmah has explained and provided documents on each of the assets seized. Unless there are evidence to refute, there is no reason to do so.

Same with the 41 accounts. These accounts were frozen last year and it is due to be released. The civil forfeiture could have been used to deny money to the account holders.

Again, the account holders have explained and provided evidence. Why the forfeiture if not for political expediency?

Does that mean recipents like Kg Baru masjid, mini dams in the interiors of Sabah and Sarawak, etc should be denied the facilities built?

Legally speaking, those Haj should also have their Haji title withdrawn. Closer to Mahathir's heart, the Langkawi fishermen should not go out to sea with 1MDB boats donated to them! 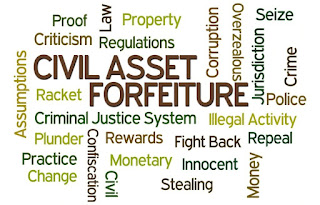 Such reckless and irresponsible application of AMLA by several agencies is believed to have frozen some RM10 billion money.

That amount of money can be leveraged and lent out by Banks for at least 10 times for RM100 billion. If it is 20, that is RM200 billion to spur and revive the economy.

Holding back the money will affect suppliers, salary and wages, company business operation, service providers, and all down the line.

Companies getting accounts frozen could defult on their loan repayments and Banks could start taking legal actions thus compounding the problem further.

Its impact affect on money supply could be more based on the economic multiplier. 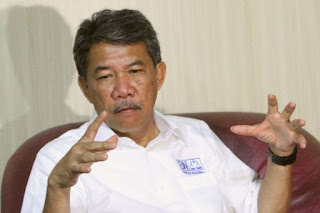 To the legal practitioners, civil forfeiture law is intended to stop money from criminal activities dissipating away.

It is a useful tool against corruption and illegal activities. Any CEO or Chairman could sellout their partner or superior out of spite from the mere threat of AMLA.

Genuine civil forfeiture can be justified. For the 41 cases, has Zamri and now Latheefa pondered whether the money meant for GE13 could possibly remain in those 41 accounts after GE14?

Frankly, it cannot be.

In the frozen accounts, the money are from new deposits and surely not from alleged 1MDB money.

This is common sense in which Zamri's usual legal reference, Tan Sri Gani Patail, would have advised. Perhaps the advise was on how to get around it. 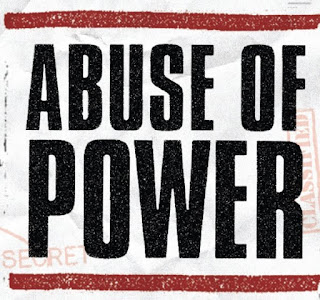 The manner accounts were frozen is deemed illegal. Latheefa or likely Zamri is aware that the alleged 1MDB money have been spent and the frozen monies in the accounts are not from questionable sources.

If Najib is being charged for abuse of power and prosecution intend to send him behind bars for it, Latheefa and Zamri have commited the same.

Cambridge Dictionary explained the quotation "The law is an ass" also means "the legal system or a particular law is wrong or not good enough, and should be changed".

If one care to observe, lawyers dwell most of court time on the law. Judges interpret the law or in Malaysia, most judges tend to be lazy to interpret and rely solely on law precedents. The court hardly care whether the law is justified, fair or make sense.

If one hear any arguments to seek justice and fairness in court, it is only when their back is against the wall and the particular law does not make sense or impractical.

Sorry, as a foreigner, I stumbled on the blog post and felt confused about what it was about. So, some background for foreigners: 1MDB is an ongoing political scandal in Malaysia.

Thank you. Could also browse through past blog postings

1Law is an ass when it suit you.

Common to hear the other side say the same. Everyone born with an asshole.

They are more relevemt and matter more.

A dap member just agreed to the argument. Why should I care for juvenile remark.

Love your writings.....please do keep it up.

I'm still in the process of diving in and understanding the 1MDB scandal. So two questions:

1. Is this video about the scandal accurate:

2. What's the most easily under stable introductory material to the 1MDB scandal you know of? (It might be useful if I plan to discuss it on blogs in the western world.)