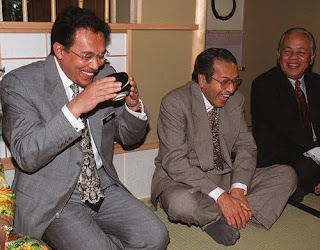 After the video of Tun Dr Mahathir hesitant body language went viral yesterday, The Star today reported a CNBC interview of Mahathir saying he will step down within 3 years.

In between one doctor appointment to another doctor for mother at a hospital, the question that pops up is when do the 3 years begin?

If it is from last year, Mahathir would pass the premiership presumably to Dato Seri Anwar Ibrahim within the latest 2 years time.

However, if the three years begin now, then Mahathir could end up finishing the full term.

At the last PPBM party convention, there calls for Mahathir to finish his term. Tan Sri Rais Yatim recently said there was no agreed date signed between Mahathir and Anwar.

It is not convenient to do a thorough analysis of the various news report now, but it does not take line by line analysis and looking through the sequences of events to reiterate Mahathir is not handing power to Anwar.

In The Star report, it is mentioned:


Mahathir had said that the government needs three years to reduce Malaysia’s debt from 80% of gross domestic product to 54%.

Anwar should be thankful that Mahathir is gracious to not want to burden Anwar to start his Prime Ministership with problems.

If any of Anwar's supporter was a fan of the British sitcom, Yes Prime Minister, they would realised at work is "salami tactic... slice by slice".

Mahathir used to be a fan of the sitcom.

In this case, Mahathir was hardly being gracious and may have did one on Anwar for saying the wrong thing.

This morning while waiting outside the doctor's office and reading news on the smartphone, there was a Malaysiakini report of now with Anwar PKR Info Chief claming PKR never demand for immediate transition of power.

Cute, Anwar got Lim Kit Siang to ask for a schedule and now Anwar is giving mixed signals.

For that mistake by Shamsul Iskandar. Mahathir seized on it.

The Star reported Dato Sri Anwar said the transition is a done deal.

Yesterday, The Star put up a frontpage of Haziq Aziz challenging Dato Seri Azmin to sue, in which his lawyer, N Surendran said will not.

Anwar was already brimming with confidence that he managed to corner Mahathir. He seemed sure that his time has come.

Today Mahathir fooled and outsmart him again. He went to the extent of saying Azmin is not so stupid to be embroiled in a sex scandal.

Succession planning lagi penting.
Anyone can drop dead any time.
We know Zizah is not capable.