Oh ... How boring! Not another Najib bashing 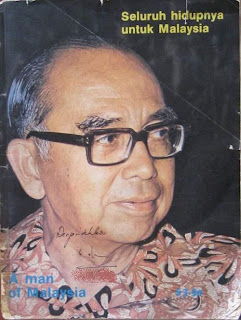 Dato' Seri Najib has been shot, missiled, and piled upon but has thus maintain a cool exterior. The Eurocopter saga is another one of a series of Najib bashing since its commencement at the Ijok by-election.

On Oct 15th, I had already written this posting but decide not to publish it. For one, I do not wish to be perceived as a Najib defender.

After all, he did disappoint me when he went along with the whole 5-year crap dished out by Abdullah & Sons Pte Ltd to safeguard his politics.

It took me a while to read back his past statements and understand his conciliatory approach vis-a-vis Dr Mahathir's aggresive stance. With Abdullah supposedly quiting March 2009, I could be a bit accomodating.

Many I have met turn sympathetic for Najib with the piling of allegations made against him. Its too many to be believable. More so, it orchestrated by Anwar. Thats where the credibility of teh allegations is lost!

I am not easily sympathetic towards public figures. In Najib's case, my sentiment is for his father. To me, Tun Abdul Razak is the greatest modern Malay leader. Myself, family, the Malays and all Malaysians owe much debt to him. And here is a family secret. If my late uncle had not chickened out by the message of P Ramlee's "Antara Dua Darjat" uttered by his father (my grandfather), Toh Puan Rahah would have been my auntie. Alas, she got a great man instead.

Many are besotted in their hate and prejudice against Najib and the negative perception of Rosmah that it passed their mind that the accusation of murder of Altantunya is a serious allegation. Murder is a capital offense that requires the rigour of "proof beyond reasonable doubt".

The recent Eurocopter allegations does not make sense. Assuming Najib is in hot soup over the Sukhoi and Scorpene deal, why would he want to self inflict more wound on himself. At a mature age of 56, he is not into sadomasochism.

Out of the blues, a close friend of mine called me up for teh tarik yesterday. Over two teh tarik kurang manis he revealed it to me. Eurocopter is so-and-so's deal. His family connection leads me to give his information much credibility. He got it out from the family of the mouth itself.

Early in the month, another friend revealed to me that his friend, a former PLC CEO Dato from Kuala Pilah whom I have met twice in my order of business, was working on the Eurocopter deal with an ex Minister from East Malaysia. Together with them is a retired MoF official. Later it was disclosed that there is a royal behind it.

I did not dispell it but there is the distinction between "working on the deal" and "taking ownership of the deal". But the royal linkup is outrageous to believe.

For a clue of whose deal it is, I'll just parapharase a famous line by Deep Throat in the film All President's Men, "Follow the chronology". Another clue is the owner of the deal have tie with a family that has long been in business with MINDEF for a long long time. The family happened to be in the cartel of arms dealer but not on this Eurocopter deal. 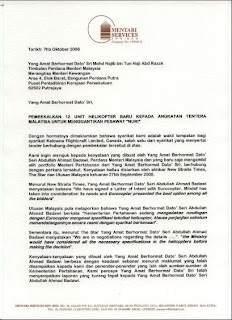 The last from Malaysia Today is on an alleged conversation between Najib and lawyer Shafie Abdullah. Unless proven, it remain heresay.

An e-mail came in from an anonymous sender, A Concerned Citizen few days back. It came attached with a pdf letter which was allegedly signed by Kapt Zahar and with a Company letterhead. It ties with the Eurocopter deal recently announced and mentioned by Sheih.

If there is to be any reservation, it came attached with an amended copy of the letter. But, that could be seen as being transparent.

Since this blogger made a posting to caution Sheih, I am beholden ethically to release this received material but with the warning caveat emptor.

The e-mail reads as below:

Here is a letter written by Kapt Datuk Zahar Hashim to the PM alleging irregularities in the award of the contract for the supply of helicopters to Mindef to replace the "Nuri".

Kapt Zahar is Ketua Bhg UMNO PJ Selatan. He recently wrote a letter to the PM and DPM alleging that they abused government funds to campaign for their party positions.

The letters could be downloaded from the savefile website here (or elsewhere all over the Internet.)

The matter was raised by Anwar Ibrahim in the latest Parliament seating on Monday. How genuine is the letter? Is it another of part of Anwar's wayang to discredit Najib?

Or is it another UMNO party election mud wrestling? Perhaps, another ceteris peribus action of Abdullah Badawi administration to lead it to Dr Mahathir.

Kapt Zahar had earlier made a letter than became the basis for Dato Mazlan Harun to make a ACA Report against Jasa's hujan kain pelikat dan wang. 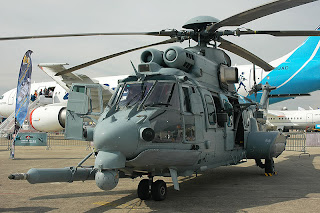 - December 2006: The Eurocopter Cougar EC725 was one of four aircraft shortlisted by the Royal Malaysian Air Force (RMAF) to replace its fleet of Nuris. The other three were the Sikorsky S92, Agusta Westland EH-101 Merlin and the Russian-made Mil Mi-17 Hip. The government had allocated US$600 million (RM1.93 billion) to buy an initial fleet of 12 helicopters.

(Missing from this Chronology is the portfolio switch between Abdullah and Najib for the Ministry of Finance and Ministry of Defense post commencing Oct 1st, 2008)

- Oct 15, 2008: Abdullah and the Public Accounts Committee sought clarification and rationale behind the Eurocopter deal which was then said to cost RM2.3 billion for 12 helicopters.

- Oct 23, 2008: PAC chairman Datuk Seri Azmi Khalid said Defence Ministry secretary-general Datuk Abu Bakar Abdullah would be among those called in to assist in the probe into the Eurocopter deal.

- Oct 24, 2008: Anti-Corruption Agency investigations director Datuk Shukri Abdull said they would investigate the Eurocopter deal to see if there were any irregularities.

- Oct 28, 2008: Abdullah announced that the purchase of the Eurocopter helicopters had been postponed, with the money chanelled towards other projects which would benefit more people.

An SMS came in yesterday:

3/11 PAC says it found no procedural abuse in Eurocopter tender process, but is concerned at lack of physical evaluation such as test flights/STAR

How do you test an equipement that has yet to be built? Test are done only at pre-delivery stage and that is where buyers and manufacturer would do their adjustments and finetuning. The best one can test at pre-order stage is trying out a similar model equipment but it would not come with the required specs.

This is a standard defense aircraft procurement procedure. So defense purchase is a technically exhausting and tedious process and not within the realm of simple minded and issue motivated politicians.

Do read Hambali Latif take on the Eurocopter episode here

But bro, half the MALAY nation believed in what Anwar said about Najib and the government. The stupid half that is.

If Najib is ACCUSED of being corrupted and a murderer, then Anwar is considered a model Muslim, and yet he is an ex-convict and facing charges of sodomy.

The Malay half must be very confused.

i think his calm and cool demeanour belie his strength

he never filed any lawsuit for money against his varied accusers, no matter how ludicrous

well, a sense of calm has enveloped the political scene, now that Najib is PM

Whatever the outcome of this hoohaa regarding the eurocopter purchase I pray that Malaysia did not end up buying the Mi-17. Because I really think that Mi-17 is a crap. Previously, Malaysia bought the Mi-17 for the fire department (Bomba). I wonder why it was not registered under the DCA and was instead registered as the military aircraft. Perhaps the helicopter is really not up to the civil aviation standard. Have anyone think about this? It's vital for Malaysia to buy aircraft that meets the Civil Aviation standard because the civil aviation set a high standard of airworthiness. Otherwise in 10-20 years time, we may end up having the same problems like Nuri. Russian aircraft are good and normally meets the performance requirements and the price is less expensive but it's could be (in most cases it is)a nightmare when it comes to MRO (maintenance, repair and overhaul). So I do hope that Malaysia didn't end up buying the Mi-17.