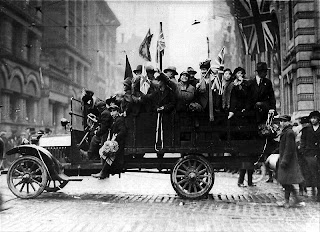 Today marks the end of World War 1. At exactly 11:00 GMT 90 years ago, a treaty was signed to end World War 1, although there were still fighting at the front.

For many of us, who has never seen war, below is a description at the front from EyeWitness to History.com:

Many soldiers believed the Armistice only a temporary measure and that the war would soon go on. As night came, the quietness, unearthly in its penetration, began to eat into their souls. The men sat around log fires, the first they had ever had at the front. They were trying to reassure themselves that there were no enemy batteries spying on them from the next hill and no German bombing planes approaching to blast them out of existence. They talked in low tones. They were nervous.

After the long months of intense strain, of keying themselves up to the daily mortal danger, of thinking always in terms of war and the enemy, the abrupt release from it all was physical and psychological agony.Some suffered a total nervous collapse. Some, of a steadier temperament, began to hope they would someday return to home and the embrace of loved ones. Some could think only of the crude little crosses that marked the graves of their comrades. Some fell into an exhausted sleep. All were bewildered by the sudden meaninglessness of their existence as soldiers - and through their teeming memories paraded that swiftly moving cavalcade of Cantigny, Soissons, St. Mihiel, the Meuse-Argonne and Sedan.

What was to come next? They did not know - and hardly cared. Their minds were numbed by the shock of peace. The past consumed their whole consciousness. The present did not exist-and the future was inconceivable."

Since then, mankind has not cease from arms conflict. The war has gotten bigger. So does the numbers of casualities. Its geographical span wider.

The sophisticated weapon and the applied strategies has made today's more brutal and violence. The suffering to both civilians and soldiers more horrifying.

Will this continue forever? Will it stopped only at the end of time? Is mankind capable to resolve disputes through peaceful means? Is God's creature created to perpetually destroy each other? Is peaceful coexitence non-existant?

You think one man is able to turn the tide of billions of human greed and inherent cruelty? Superman is just a comic book character.

Unlike the billions of people on this earth, he is in a position to stop the destruction by imposing his will to insist the country he is soon to lead to stop!

Obama came with that hope and promise.