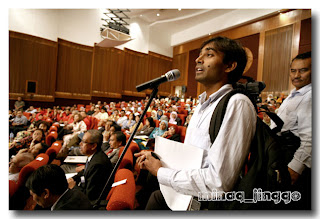 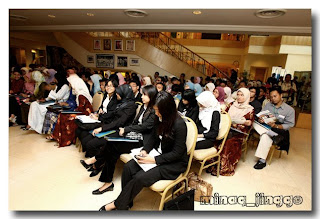 Having once attended a Bangsa Malaysia do last year, this was truly open, sincere and refreshing inspiring affair over the previously skewedly opinionated and Malay/UMNO-bashing intended affair. There was the horrifying incident of a moderator imposing a one-minute limit on a certain audience to speak and yet allow others to yap aimlessly with no time limit.

The observations of Dr Mahathir, opening brief list by Dato Ahmad Dahan, overview of the subject matter by Prof Shamsul, a refreshing new perspective by Dr Chandra, and snippets of ideas from Dr KJ John and Alvin Goh are useful information and views worthy to be shared. 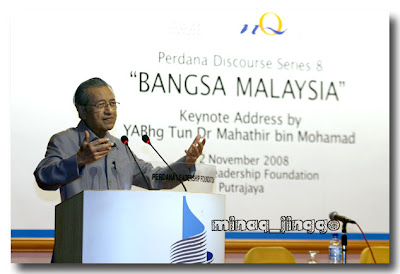 In his off-the cuff keynote speech, Dr Mahathir made a comparison of countries like Switzerland, United States and Australia and conclude that Malaysia is unique in the fact that its highly segregated population - segregated by race, religion, living areas, schools, and economic activites - could live peacefully.

He gave his historical observation of Malaysian politics to show that the willingness of UMNO's Malay-based polity to share power and cooperation with race-based political parties provided the stability, balancing factor, and contributed immensely to the peace and posperity of the state.

Citing the first election in 1955, he said Malay could monopolise power to itself but UMNO choose to share power with other races. During the time, Malay voters comprise 90% of eligible voters but UMNO shared seats with MCA and campaign for MCA to win in Malay majority areas. Perikatan won 51 of the 52 seats to enable a majority in the 90-person colonial-time Legislative Council (Legco).

That spirit of power sharing gave them continual electoral success. UMNO continues to support non Malay candidates in Malay majority areas and campaign to Malays to support for Non Malay candidates. In 1999, during the financial crisis and Anwar issue, it was the Chinese and non Malays voters that supported UMNO.

Dr Mahathir dismissed the view that the recent general election points to the rejection of race based politics. Race-based Barisan Nasional (BN) is still relevant to tackle racism.

"The BN has proven that for the last 50 years, the party has actually reduced the debate on racism and developed this country to the level that we are today," he said.

Dr Mahathir observed that after the general election, we are more racial than ever. "We debate about race every day, more than before," he said.

He believed, "If the outcome of the March general election was a rejection of racial politics, there would be less talk about race today. Instead, race has become a central issue since March. That election has stimulated discussion about little else other than race."

"Apart from some window-dressing, it's still the old DAP". DAPs members are only Chinese. PAS is obviously Malay. While he described PKR as a hodgepodge of Islamist, pro-Hindraf, and pro-Chinese educationists. After Anwar, he asked who will lead the PKR? If it is led by a non-Malay, he believed it will not have the support of the Malays."

In his discussion of Switzerland, America and Australia, he noted that language plays a role in unifying and shaping the respective bangsa or nation.

In trilingual Switzerland, the notion of a national language does not hold there but the population is able to command two language and that enable the country to unify. In America, the English language, culture, and tradition of the first settler was adopted as the unifying common factor in its nation building. So does Australia.

Quiting from Rocky's post, "Dr M also chided those who clamour for a Bangsa Malaysia but are unwilling to give due regards to the national language. These people, he said, should emulate Obama and children of migrant races in the US, Switzerland and Australia."

"Obama, who must be in some ways a descendant of a slave, is today US President. The blacks had tribes in Africa but after years in the US they all speak English. English is their mother tongue. The speak English at work, at school and at home. The same as the migrant Jews. They became naturalised American citizens. But they accept that as Americans they must speak English."

The little interaction between races from school level brought about Government to consider the Sekolah Wawasan. He said, "For a Bangsa Malaysia to be born, the current race-based schooling system must go".

"This is the only country where we have different streams of schools: Chinese, Tamil and National schools. The Chinese educationists (Dong Jiao Zhong) think their kids should not get any close to Malays from the national schools. Or they might turn into Chinese Mat rempits."

"The idea of Sekolah Wawasan was to put the 3 schools in one campus. This will compel the children of different races to meet and interact with each other. Morning assembly would be held together. The pupils will be in one assembly. When they play, they'll play together. Not Chinese school vs National school.

"I must admit the Sekolah Wawasan concept did not get support, especially from the Chinese educationist groups. They don't want to have anything to do with the Malays."

Dr Mahathir said dismantling the issue should be done slowly and the people must be prepared to make a sacrifice and fasten the proses by restoring national stability.

"That can only be done, of course, not through posturing by the opposition party." he added.

He emphasised that developing a Bangsa Malaysia is through people and not by political imposition.

A point that could be added to his people-desired change is that there should not be any political imposition, but lawyers involvement too! The adversarial nature of lawyer-activist championing causes through legal-laced shallow rhetorics does not auger well for the drive towards bangsa Malaysia.

The atmosphere should be less charged now. The excess energy could be redirected to positive nation building.

Tun Dr. Mahathir again proves his mettle. His ability to describe complex issues in simple terms is most compelling. It just shows that he has true understanding of the issues and does not need to beat around the bush..

You are wrong, Dr. mahathir that the Malay can hold on to power in the fifties.

Go back and read the real history on the reasons why the British agreed to grant independence to malaya: only if the 3 races can agree and accept to live peacefully together.

Go and find out why Dr Lim CHong Eu, the then deputy President of MCA resigned and form United Democratic Party.

If MCA then had acceeded to Dr. Lim Chong Eu's forsight, we would not have this racial mess and exploited by you during your dictatorial years.

Please, there are still knowledgeable people alive who knows what is the real cause of what we see in this country who does not accept history.

Go retire a dn read the real history of Malaya.

Good example Dr M. Let's talk about Switzerland, where the French-speaking and Italina-speaking minorities have their own school systems and co-exist freely with the German majority (over 60% by the way), each having their own culture, religion leanings (protestant/ catholic rift). Probably the richest country in the world. Why can't Malaysia follow this and instead chose to leave the lead to Singapore in Asia?
Do not start about local factors. It's mostly mountains there and no resource but the people.