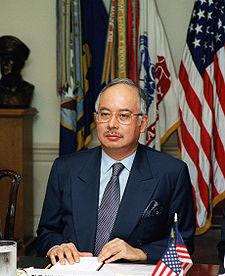 For this blogger's berangan, assume the pix above as that of Jauhari Tun Abdul Razak
The global financial and economic system is collapsing. The world economic and security situation is chaotic. W Bush had put the finishing touch to thsi pandemonoum with his military adventures.

All over the world, one hear news of governments cutting back capital spending, and pump priming the economy. Banks and fianncial institutions getting bailout by Governments, a once taboo to the global village mantra of the 90s. Companies not having access to bailouts and governmental assistance are cutting down operations, manpower, cutting cost and hiving off losing outfits.

This is happening at the same time and no part of the world is spared. Not even Malaysia. Not even when trader supremo, Tan Sri Nor Mohammad Yakcop said so. Not even when mousy Banker turned Economist Manager, Amirsham think so.

Psst pssstt .... supremo as being the trader that made the biggest lost in world financial history (for now), more than the Hunt Brothers attempt to corner the silver market, Ivan Boesky's LBOs, option trading losess of LTCM that got US Government bailout, and even our own BMF.

Why should we keep someone past due date?

Assuming I was born into the family of Tun Abdul Razak (Boy, do I idolise the man) and earlier than Najib. And, I won the Pekan at 25, older than Najib by two years then, in 1976. I am now the Finance Minister and Prime Minster having beaten Abdullah Badawi years ago. He he he ... Abdullah did not get to execute his insidious twice delayed UMNO election plan.

Oh yes ... I must have a name. It must start with N and not the odd one with a J. Come to think of it, why not a J. If there is a Johari in the family, then I am Jauhari, who appreciates the Manikam.

Lets not be confused with a former Minister from MIC, the late Tan Sri Manikavasagam.

Coming back to economics.

In my view, the past political and appplied economic methods may not work.

The Keynesians believe in Governmental intervention of the economy. In this country, this is the thinking of old school proponents the like of Ungku Aziz, Tengku Razaleigh, Rais Saniman, and such.

Then, there are the monetarist belief in the somewhat free market mechanism and Governmental intervention could done judiciously and gradually through financial policies ie control of Money Supply. This should the thinking of current Economics Manager like Zeti, Awang Adik, Nor Mohamad, Amirsham, etc.

If we were to paste a pro-IMF label on these Central Bankers, it is not far fetch. They buy-in to the philosophy of liberalisation, free flow of capital, and market mechanism of "let the fittest survive". In fact, they are regulars at the Annual IMF/World Bank Conventions

There should be other schools of economic thought, but I'll not do hair spliting. I have a more important point to convey.

I say it will not work because the usual variables and relationship in all these economic model for all likelihood would be disfunctional. There is no country or region with the economic strength to take global economic leadership.

Japanese has still not sort out their banking system mess. China is a new economic giant but the Chinese, including Taiwan and Hong Kong, got small dick. They are too shy to take centre stage and take economic leadership to pull the rest of the World out of its misery. If they wish to, would the American with Zionist and Neo-Con backing allow for that strategic allowance? Not even Obama, believe me.

Nevertheless, the cutbacks, bailouts and pump priming is short termish, but necessary to allay fear and panic within the public, business people and investors. Najib had to do what he had to do.

But if I am Najib, or Jauhar actually, I would not boost Government spending by supporting the construction/property sector. I would take a longer perspective to boost sector that generate domestic economy, reduce imports, and create jobs.

The past approach of wealth creation through export have to be relooked. Some export activites ties in with certain limited resources of the nation. Jauhari would relook the idea of exploiting depleting resources of the country that only serve to wet the consumption of the consumers of the world.

Wealth creation from resources of the nation should essentially go back to benefit the population, including the hard working Indons and Bangla Deshis.

There is an opportunity presenting now.

Lets learn something from the Chinese. There is a character in the Chinese language to describe chaos. Since the language is such, the same character, sound and pronouncation could have different meaning with different tones; - or / or \ or V.

Chaos in the Chinese language could mean opportunity. JFK knows this.

Under such a chaotic situation, it provides opportunity to right the wrong or make the adjustment to fine tune the economic structure.

Make it more just and fair, rather than the trap for equality. The economy must not only reward the hard working ones. It must also be an economy that include the moral mechanism where the wealthy is obligated to help the haves not.

It could be a level playing field with a golfing system of handicap.

To do this, we cannot exist as a hodgepodge of different economic philosphies being applied to different segements and parts of the economy. Free economy is one sector, welfare in other segment, and there is that Islamic aspiration.

This is an opportunity to develop the right economic philospohy and political economic model that is both the solution to the economic malaise of the past 5 years of Abdullah administration, be the fortress against neo-colonial economic encroachment, and the uniting factor for the country.

I, Jauhari, Najib's eldest brother, would not just say it, but really think outside the box.

I would actually bring about a major paradigm shift.

Don't call it Islamic banking or economics or any strange sounding Arabic terms. Hell, don't even give a fancy International brand.

Reiterating what I have said before, we have to relook the existing dual economic structure of monetary and real economics.

The existing capitalist-derived monetary structure is based on the preservation of wealth of old money from western colonial times and aristocrats of fore.

I tell you why.

The pillar of capitalism financial model is based on three institutions - Banks to provide risk free return, Insurance to safeguard Bank loans (i.e. money of the wealthy), Financial market to serve as exit for their risky investment and risk redistribution.

Risk free return is basically interest or in more religous term is usury. The bigger sin of usury is excess profiteering or making profit beyond the compensation for risk and effort. All religion is against it, even Judaism.

Interest income is based on return for doing nothing and taking no risk. No risk no gain. Without investment and taking risk, economy cannot strive, jobs cannot be created, technology cannot be developed, and entrepreneurs cannot evolve.

Fixed interest income arbitrarily impose fixed cost on money and impose the constraint of a minimum growth rate on the economy, thus distinguishing economic growth between real and net growth.

As a result, it turned money into commodity. Instead of money playing its role as medium of exchange, and store value of wealth, it has become a commodity to buy and sell at a price.

When you throw in issue of fiat and paper money, where money is now not a stored value of wealth but debt, it gets more complicated.

I got a lot more to write about, buts its already quite long, so I have to pen off.

The point I am trying to convey is lets think and do something totally different!

We need to ponder a new roadmap for the economy, that is totally different from the current structure and model that invites communal strife and a potential source of instability.

Our economy have to evolve its own model that is just not economy for economic sake, disjointed from other aspect of nation-builing. It must be an economy based on just, not merely equality, and with compassion for all.

The current chaos is an oppurtunity for Malaysia to prove to the world something different from the current norm can be feasibly done.

Perhasp, I'll write a second serie to this.

What NOT to do:

Now they are stuck with a trillion Dollar debt and dismal consumer confidence.

And Najib wants us to do what: "Make the wholly voluntary (not so, it seems) reduction in EPF contribution that would put some money (around RM150 for me) in the pocket.

RM150 extra can sure get me going on a buying spree to boost the economy.

Don't ask me. I'm not the one with the trainload of double/triple First class honours from OxbRidge/Harvard/Yale etc etc.

You're aboslutely right. Now is the time to do the not so obvious.

I like your sentiments. We need to put Malaysia first. We mustn't open up the economy without making sure that we have some advantages and, I don't mean the free equity-type advantage. I mean the advantage of being able to compete. Otherwise a new form of colonialism will arise that will laugh at the way the Malay, Chinese and Indian tribes are quarreling. We'll all end up as a nation of employees.

Look at the government's plans to sell land and other govt assets. This is becoming a national "lelong". I thought they said the "economy is fundamentally sound"?

Have my own blof now. Do drop by whenever convenient.

Unfortunately our economic model has regressed from Dr Mahatir's time and too much investment was made in simple, low value chain businesses i.e. palm oil.

My initial draft posting was too negative, and let me instead contribute to the 'solving' rather than the problem-fication.

Problem #1 The Government
This is huge. For 22 years we have been bragging about pro growth, pro business government, and right now this is not the case.

Solution : I really don't know, the electorate is too fractionalized so that even if a Government takes a majority, a substantial portion will still be opposed to it.

Problem #2 Labour
From time to time, I will come across the Malaysian worker. Frankly, we cannot fight on wages, as we are too expensive or brains as we are too stupid. So end result , you guessed it.

Solution: This is just too huge. The proportion of labour requiring retraining is just too high and at the same time, due to our demographics, more and more young people will be entering the labour market. Pak Lah once suggested that they go and work in the farms, right now, that seems to be the best answer, which is not saying much about our chances.

Problem #3: Everything else. To me the situation in Malaysia is not surprising, remember the story of the grasshopper and the ants. Well we were the grasshopper - big time. We dont have an edge in manufacturing, can have an edge in palm oil but back to 1980s where we are exposed to commodity price fluctuation ( CPO Nov in 1,5xx) and certainly not the domestic market size to justify significant investment in service sector.

Well, might as well pick up that cangkul. Dear PM, where do I need to go?

It's a pity you did not physically get into politics. You would have made an excellent Finance Minister. Heck, even an outstanding PM!