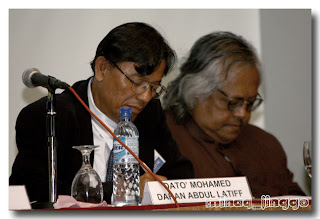 To begin the session, moderator Dato Mohamed Dahan Abdul Latif, Executive Director of Gabem, listed the issues seldom raised in any discussion on the subject of Bangsa Malaysia. He listed 17, ranging from history and legal, covering Government plan and policies to society, organisations, and contemporary issues. (The list is available at the end of this posting).

This had the encouraging impact on panelist to not repeat issues already discuss elsewhere and even had one panelist chucked away his already prepared paper. The panelists, particularly Dr Chandra Muzaffar of JUST, made effort to bring new perspective to the subject.

Prof Shamsul revealed that the Bangsa Malaysia was coined by the late Rustam Sani, when he was in ISIS before going into politics with Parti Keadilan Nasional. He helped to translate a term described by Dr Mahathir then as "United Malaysian Nation". Bangsa in Malay could mean either race or nation but in this case, it means nation.

He went on to discussed the concept notion of nation-state. Prof Shamsul said Rustam described the existense of nation without state in the world like Kurds and Moros. There exist nation with state in monoracial countries, like Japan, Germany and etc. Malaysia, was described by Rustam, as a state without nation.

Prof Shamsul explained that nation represents an idea of togetherness, unity and a common direction in existence with the ideals of equality, justice, and other progressive attributes. Vision 2020, the slogan or branding to Dr Mahathir's Moving Forward speech, was an ambitous and thoroughly thought attempt to answer the nation-building question.

He elaborated that national building is Malaysia is faced with its own reality and constraints. There exist competing ideas, in what Prof Shamsul described as, "nations of intent."

In Malay polity itself, there exist three major ideas. There is the adminsitrocrats's idea - a term in Dr Chandra's book, The Protector to describe a group born to be leader - for a plural Malaysia but grounded in Malay polity. There is the Melayu Raya vision of one Malay nation-state in history promoted by the banned Malay Nationalist Party (MNP) of Ibrahim Yaacob with their collaborators in Indonesia and the Malay Archipelago. Then, there is the Islamic state struggle of PAS.

There exist ideas of nation proposed by other racial groups, Sabah and Sarawak, political parties, and ideologies, thus the existence of a plethora of nations of intent, real or imagined. Bangsa Malaysia is still an unanswered question, but Vision 2020 was a serious effort to answer this pertinent question.

In his concluding remark he commented that Bangsa Malaysia term confused people and United Malaysian Nation is a more accurate term but he asked, what concept of unity are we looking for - unity in uniformity or unity in diversity?

Multi-ism for Unity in Diversity

The subsequent speakers talked about a United Malaysian Nation based on diversity. This is a common and unbending assertion of non-Bumiputeras, despite ideas from progressive Bumiputera for a unity seeking for a common uniformity.

Dr Alvin Goh, a Malaysiakini.com columnist, who only recently just returned home after living in Britain, chucked aside his prepared paper believed to be along areas already discussed elsewhere and perhaps his points were rebuted before it got delivered.

Alvin decide to "say it from the heart" and described the building of Bangsa Malaysia from his surreal feeling of observing a big magnificent tree in Taman Negara. While the tree was a nice metaphor to describe the need to think forward, he was being typical when he said he does not give a damn how old that tree was. It means the surrounding and how the tree came about to grow is irrelevant in his consideration of the future.

His notion of the future was a common regurgitation that refuse to acknowledge history and inter-communal reality. His heart's preference was typically western flavoured liberalism and multipluralism often asserted by "civil society" and multiracial political parties. The suggestion by the awed-with-Western-society lad is generic ideas discussed on such platforms but not grounded for a just solution.

Alvin was dangerously spewing viewpoints in a romantic manner but subtly reviving Lee Kuan Yew's "sama rata sama rasa" slogan during his brief stay in Malaysia. That slogan reverberating in the 60s was responsible for heightening racial sentiment that resulted later into the bloodbath of May 13, 1969.

Although such idea have found a Malay champion in PKR, a Malay-based multiracial political party, their adaptation of such ideology, justified by ineffective governmental implementation and corruption lacks any depth and seemed more out of political expediency.

Alvin's ignorance of Malaysian socio-political landscape is obvious and his view could be easily dismissed by the emphasis for justice over equality. His ideas require the ability to convince and change the perception of majority Malay and Pribumi that its an excuse for laisse faire economy. Such idea will not be acceptable for it will seriously disadvantaged the economic minority status of Bumiputera and result in further economic monopoly by Chinese.

Dr KJ John of University College of Sedaya touched similar issues but in a less assertive angle through human's spiritual and physiologial character for individual natural diversity. The title of his power point presentation was "The Malaysian Dilemma: How to move beyond Merdeka to celebrate diverse Malaysia?"

In his view, he was sending the message that human is diversed in many ways and attempt to compartmentalised will never be successful. Thus, Bangsa Malaysia must be a celebration of diversity.

He believed that human character as a multilayered, as in his onion model, with spirituality as its innermost core. Although the analogy was outrightly criticised by Prof Shamsul as inaccurate, there was no objection towards Dr Johns concluding maxim of "Integration with Integrity".

In the course of his presentation, Dr John touched on the need to look at issues beyond Merdeka and Malaya, look at issues from wholesome Malaysian perspective, and emphasised the rule of law. He proposed the THOU-We-i framework described as maturity model of organisation from dependence to independence and finally interdependence. 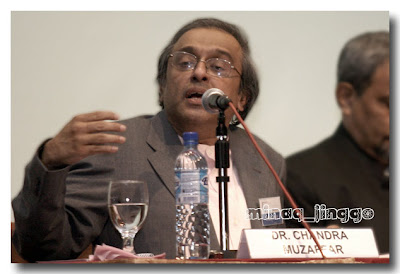 Dr Chandra's wrap-up of the myriad of views interestingly came in as first discussant. The discussion of nation building for a Bangsa Malaysia is seldom confined to within Bumiputera rights and perception of Bumiputera rights by both Bumiputera and non-Bumiputera.

He proposed that non-Malay/Bumiputera's responsibility as follows:

In turn, the Malay and Bumiputera must be responsible to:

He expounded on the need for all parties to address the dangerous divide in society by developing a sense empathy, respect and common responsibility.

On the subject of Ketuanan Melayu bandied by UMNO and receiving the brunt of current criticism, Prof Shamsul shed a different light to the often misused and misleading term derived from the term Malay Dominance coined by Tan Sri Abdullah Ahmad. Tan Sri Abdullah was present at the Perdana Discourse.

In the Q&A session, Prof Shamsul expressed his disagreement and criticised Tan Sri Abdullah for the used of the term and initiating the concept of Ketuanan Melayu. He explained that the meaning of "Tuan" in Malay also means respect, as in the use in the word "Tuan Puteri". The dominance meaning received prominance when often used to address the orang putih during Colonial times and continued to misled the meaning of Tuan.

Another point to add, octogenarian Tan Sri Khalid Abdullah, the former group Chief Editor of Utusan Malaysia, explained in a Conference in Johor Baru that the word Ketuanan Melayu first surface in the early days of Merdeka to mean benevolence. The "Tuan", which is basically the Malay ruler confering citizenship to 1,000,000 local-born Immigrants before Merdeka.

This blogger does not agree with the use of Ketuanan Melayu but more a keen to the term of Kesinambungan Kedaulatan Melayu proposed by former History Professor of University Malaya, Prof Malik Munip thats more grounded in the reality of Malay polity.

In the concluding part of the session, Dr Chandra expressed agreement with one comment from the floor calling for strong leadership. He said it is essential in such a diverse society like Malaysia.

He expressed a serious plea for all members of society to be vigilance for he sees a time bomb of conflict brewing with conflicting views being expressed openly and irresponsibily. All panelist concluded with a common theme for the need to seek a unity of purpose and a consensual united theme for the direction of the nation.

Yes, Kesinambungan Kedaulatan Melayu has a more 'holistic feel' to the idea.

But then a rose is but a rose by whatever name you call it.

It's only the a gymnastic of the gab.

First and foremost, Ketuanan Melayu in the intended meaning of Malay dominance or more specifically, Malay forceful imposition is wrong.

I hope you did not missed the part about prof shamsul interpretation in the meaning of tuan and adulteration of the word tuan in colonial times.

If there had been Malay attitude of dominance, UMNO does not need to share power in the 1955 election with MCA.

In 1955, it cannot dominate the election on its own with Malay voters at 90%!

It does not to safeguard MCA and MIC leaders in safe Malay seats!

Even during the times of the Melaka Empire, where there was the Malay Canon, any imposition by force against one's free will is a crime.

It simply means this country does not exist out of vacuum or a piece of land rise out of the blue sea of South China Seas to become Malaysia.

It is utterly stupid to expect Malaysia to be a country that does not arise from history. It has.

In a short speech to receive a demonstration of support, the Sultan of Perak - the King being symbol and the empowered Malay sovereignty - spoke of the rise from the "ashes" of Melaka Empire. It only means continuity.

Its not gymnastic of gab. That is what Dr Mavis Puthucheary wants everyone to believe in, because she said the same thing at the Bar Council forum on Ketuanan Melayu.

But, she has a shallow understanding of history and resorts to conspiracy theory and selective factual and analystical interpretation of history.

Much time spent on writing this report of the discourse is to prmote the need to see thinsg from the bigger perspective of nation-building with the depth, compassion and intellect to read the consequences of our stance and actions.

Building a nation is a complex process and more so in Malaysia. It can't be simplified into easy to prepare and easy to digest ideas like an American burger!

United Malaysian Nation, but not a "Malaysian Malaysia"

Come on - Big difference, is it?
That's real "deep" wordplay to deny the reality that others have been emphasising on it before the geniuses from Umno ....