Proxies revealed on Anwar and Quek! 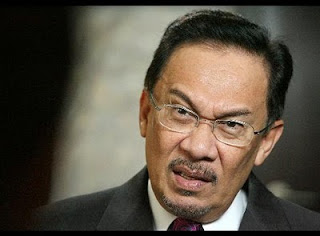 The lawsuit was filed by Hong Leong Finance Bhd (HLFB) in 1997 but stangely HLFB had stalled proceeding since 2005. It was only reactivated recently.

Has Quek Leng Chan and Hong Leong Group given up on Anwar Ibrahim?

The proposed amendment was rejected by Justice Hadhariah Syed Ismail on the ground that it had come too late in the course of the trial.

Raja Petra's made a revelation today of the court submission by the defense. It revealed Anwar and Quek as having the ultimate interest in Arus Murni.

Malaysia Today here disclosed this morning samples of the defense submission by Low.

The rejected item was item 4 in Page 3 of the defense submission that spelt out Anwar and Tan Sri Quek Leng Chan as the having the ultimate interest in Arus Murni. See the highlighted part taken from Malaysia Today below: 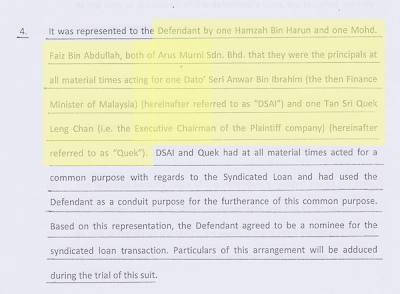 In the defense submission made under oath, Hamzah Harun and Mohd Faiz Abdullah was stated as "principals at all time acting for" or in normal parlance, proxy to Anwar and Quek in Arus Murni for the exercise to takeover KBB from UMNO-initiated cooperative, KUBB. 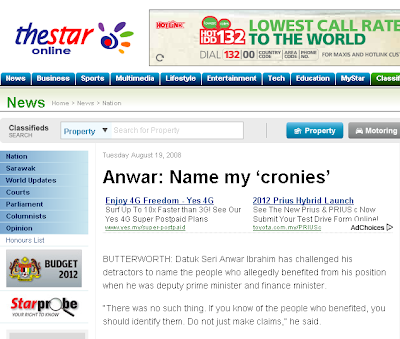 This revelation will be another line of blockbuster of Anwar, who on August 19, 2008 here challenged his detractors to name his cronies.

That is not difficult. Many had done so.

In his days as Minister of Finance, his cronies are publicly known. So does this revelation which merely confirmed what the bankers and market already know.

This leaked court document was submitted as a trial exhibit as proof for the defense. The material is merely rejected on procedural or technical basis and not due to it's truthfulness.

It will be hard press on Anwar to deny to the public. In fact, it would have been better off for him that the evidence is argued and disputed in the trial.

The defense could probably appeal this rejection.

Should the defense appeal and was accepted, this piece of information will be accepted as proof, strong or weak, unless disputed by Anwar and Quek Leng Chan.

How will Anwar answer to the public?

He can't say the court has decided to reject it. To turn the table on his usual psywar tactic of public perception, he can't deny based on merely technical reason.

The judge and jury in the court of public opinion need a better answer than that.

The public will also await what Faiz and Hamzah have to say on this. If Faiz and Hamzah are truly proxies, it is unlikely they are willing to take the fall to pay for Anwar's and Quek's loans.

The amount of RM224.5 million is no chicken feed to anybody.

If they are not proxies, they will still have to fend off HLFB from bankrupting them. Do they have something else to reveal to save their own skin or Anwar and Quek will pay for it?

In the court of public opinion, it is not what you say that matters sometime, but how you say it. Thus, how will Anwar, Hamzah, Faiz and Quek reply?

Quek also has to answer to save his banking business as it is as much at stake.

After much difficulty for the Quek family, both in Malaysia and Singapore, to get a banking license, what will be the implication to them for breaching a cardinal sin in banking i.e. lending to one own self?

Ask Tan Sri Teh Hiong Piow of Public Bank of the treatment he gets from the late Bank Negara Malaysia Governor, Tun Ismail Ali. If the allegation could stick, Teh could have gone to jail and get his banking license suspended.

In RPK article about the same issue, there is a very interesting quote.

This tells us that there is more need for UMNO to exist, because if PR wins and DAP managed to siphoned into power like what happen to Penang, it will be worse. This time the quote will read like "behind every Chinese business tycoon is a Chinese politician. The Chinese need the Politician to spin their rip off. The Politician also need the Chinese to tell their success story. The Chinese now no longer need the Malays to abuse this power. The Chinese already have economic power and simply have to invest their money in any Chinese politician."

The situation in Penang is a good example of what is happening. The DAP Chinese politician now team up with the Chinese tycoon to rip the state in the name of CAT.

Do stick to the subject. Sori Azman Hashim is not.

Every words or statement made to or in court is accepted as good unless there is a counter answer or disputed convincingly in court.

I think you are being presumptous to assume Low cannot prove and it is a matter of heresay.

If Anwar side do not dispute, it will be an accepted and refered fact.

Should realised what it means by rejected on technical ground.

In fact there is such practise for court to reject new addition because of time factor.

If the proceeding was only kick start now, since 2005, why not give the leeway and let this clause be argued.

In the name of justice??