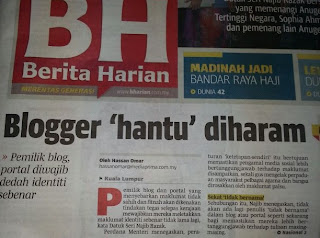 Why are we surprised and not afraid?

Is it because when "ghost" blogger or anonymous blogger are banned, it would mean the end of our profession. It will mean us so-called elitist blogger, as some blogger wish to label us as, will not get to collect fee in the million ringgit a year for each blogger.

Hope they reveal the paymaster correctly.

We sure could use few hundred thousand to patch our old leaky air-con vent and put a deposit for a Lambourghini similar to the one bought by a condo dweller near Seri Pacific hotel. 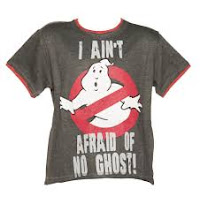 Being afraid is hardly an obstacle. Otherwise, why the heck should we be writing and making brave remarks and expose? That is making enemies from both sides of the political divide.

Off course, there will be those claiming we are brave because we are anonymous. But then again, we are not that anonymous. Many people know of us.

Off course, we will never admit in a court of law if we ever need to be present.

In fact, if we are anonymus, why is it someone told us of an attempt to sue us.

Since our lawyer (quite famous and a mamak, mind you how good those lawyers of subcontinent origin are) told us there is nothing to be worried, we ignored any legal threat or summon. Maybe the chap said that to us because we are supposed to be pro bono. Just kidding bro.

Actually, we are not afraid because we do not care to such threat. After going through half a century of living, we have nothing more to be afraid of what is on earth.

If weapons do not get the better of us, there is always gout, asthma, etc waiting.

Our only fear is if we are on the wrong side of the truth.

Off course, it takes somebody to claim to fight for a cause and believe the truth has to be made known without batting an eyelid or flinching their eyeball or hint of uneasiness. 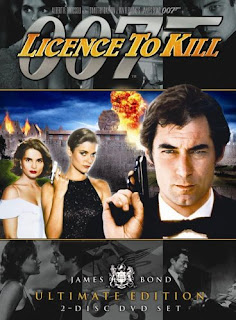 It is quite a surprise that such an important statement about banning anonymity is not reported in The Star. The report below:

"Instead, to maintain the country's harmony, the federal government will enforce laws already in place to ensure that action is taken against anyone who fans hatred and racial sentiments or belittles the monarchy, and those who try to subvert the parliamentary democracy," he added.

Najib said this in his speech at the presentation ceremony of the Malaysian Press Institute (MPI)-Petronas Malaysian Journalism Awards 2012 here Wednesday.

He said the people must be mature and ensure social media was not misused.

"We must create an environment where there are principles and values as well as responsibility towards anything published in social media," he said.

He suggested a "positive control" to ensure that there was responsibility and that information published did not go against any laws.

The Singapore government recently announced that online news portals that regularly reported on the city state would be required to procure a licence, effective June 1.

Perhaps, it is reported in the News Straits Times.

Frankly, we welcome the position taken by the Prime Minister. Self regulation or self discipline is the way to go.

If there are bloggers or social media practitioners and commentators that got out of line, let the existing law takes it's course. We are quite sure the wayward ones will get back in line.

Provide budget to MCMC, police and public attorney to monitor and enforce the law. There is nothing to stop them since MCMC can trace the IPs of all users.

On the subject of banning anonymous bloggers and commentors, will Blogspot.com cooperate to change the blog registration, sign-in and commentator format to insist only real names used for Malaysian?

Can Blogspot.com verify if the names are genuine?

If foreigners used to operating anonymously abroad decide to blog or comment when in Malaysia, are we to refuse them Internet access?

If Blogspot.com refuse to cooperate because anonymity is an accepted practise on the Internet worldwide, will MCMC block out Blogspot.com sites totally?

Before attempting to answer, remember that the Bill of Guarantee of the Multimedia Supercorridor (MSC) guarantees no censorship on the Internet.

Supposed with the smart thinking Ketua Penerangan UMNO, they still get to implement the ruling to use actual names.

To be fair, will it mean that practise of using  pseudonym is no more practise in newspaper article, poems, books, etc.

Otherwise it is not fair to the bloggers and social media commentators. It affects the bigger majority of non political users of Blogspot.com.

Assuming Blogspot.com refuse to cooperate, will the Government refuse access to Google.com?

This is a bigger matter than Blogspot.com. It is access and also investment.

How will the government make Blogspot.com to agree?

Is it by getting Google.com to sign an agreement with the government for those criteria and term of usage in Malaysia to be acceptable? Or get Google.com to move their headquarter from the US to Malaysia, thus make them abide Malaysian cyberlaw and practise?

One thing for sure is that combating anonymity for non political use will only anger the public towards government. Political news and discourse is only 10% (just a guess) of the purpose to use the Internet. 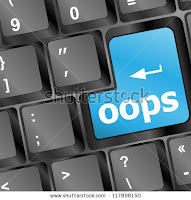 We have the strange feeling that someone must have written a report based on a circulated text that was not used by the PM in his speech.

It is supposed to not happen because any prior circulated text would request that they be check against the delivered speech.

Should the remark be true, it will be a case of some adviser or speech writer that do not understand the subject they advise or wrote.

If the government wants to address the excesses on the Internet by the opposition, other than using the process of law enforcement, they should understand how the opposition cyber propaganda works or they will be made a laughing stock.

Keep in simple and effective. But then again, PM will not impose a licensing requirement on news portal.

The alleged amount seemed to be in the multiple of 45 times to the acknowledged million received to certain state outfit. Read it somewhere in one of the eastern blog.

Frankly, if there is such amount of money for blogger, it sure could improve the army of volunteers. The whole BN cyber warfare can do much better than their present state. The heads can do his work more effectively.

With so much hype over Red Bean Army, we hope we will not be doing trend following like the rush to create bloggers after the 2008 general election.

These days every other person want to start their own such army.

It is laughable if we are to reveal of a Ministry that intend to hold a forum on Red Bean Army. We'll give a hint. Their scope of work is related to areas with limited Internet access.

It really does not need a forum if politicians understand effective communication and know when to shut up and let professional civil servants and corporate men carry out their work.

Before the regiment or batalion is formed, they are already talking about an army like the Allied forces. But, do they know what cyberwarfare is about.

There is such task as understanding the terrain and opponent of such war. Prior to winning a war, one has to be capable at winning battle. The soldiers and the ranks have to be trained, capable and have some sense of strategy. 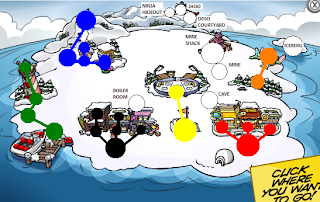 Red Bean or Green Peas or perhaps Blue Bonnet, the secret lies in the strategy. Any strategy need a clear objective or mission. Then it needs someone who understand how it works and how to orchestrate a war like Patton or Horatio Nelson or Sun Tzu, to lead.

No time for theoretical first timer to act as General. They must be players themselves in order to be respected by the troops.

And not General who tells the President that our blogs are highly ranked, dissemination is very successful and controlled 8 out of the 10 hot issues effectively, but yet say we lost out due to Red Bean Army. What a bummer!!!

It should be someone who not only understand but had experience in both mainstream and non mainstream media. Smoke created by burning dry twigs has been used before as media although these days it will be more related to technology.

There is also the matter of information and propaganda with it's different objective, time span effectiveness and characteristics.

If proper strategy formulation is done, they should realise that they do not need too much infantry. Unless, someone has other reasons.

He conned many MCA people of his deep knowledge of DAP and end up advised Chua Soi Lek to MCA's worst defeat in their history.

After milking the money from Chua's media unit, heard he is now trying to move to UMNO/PBB circles to further his future.

Just check out his background and contacts. Very suspicious character...

Hey RBA .. why didn't you tell us that SYA had been working with MCA covertly before he exposed RBA.