What is the relevance of continuing the protest aganst EC when Anwar swore in? 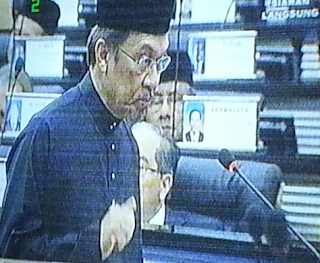 It means Anwar acknowledged the result!

At around 11 am this morning, Dato Seri Anwar Ibrahim took his oath as Member of Parliament for Permatang Pauh.

He swore with all sincerity to his best in carrying out his duties as Member of Parliament. And, he swore allegiance to the country and to defend and uphold the Constitution.

Prior to the swearing in, questions arised on his call to boycott the swearing in ceremony. He must have thought that it is purely ceremonial and he can remain as MP and Opposition leader without having to swear.

DAP, PAS and his own PKR MPs did not went along and he turnaround to say that he only said he is boycotting the briefing before Parliament commence seating.

By swearing in, he is accepting the results of the election and is in conflict with his position to question the integrity of the Elections Commissions.

Only yesterday, he had the penultimate event of the Jelajah Suara Rakyat roadshow and he was still accusing EC of cheating and calling for the resignation of the EC Chairman and his Deputy.


Strange thing is, while Harris Ibrahim called for Anwar to remain in his position, he was with Badrul Shahrin and his SAMM group together with Anwar Ibrahim and several opposition leaders minus the DAP members in that rally.

They know so well that the opposition leaders they were doing the rally with yesterday will be swearing in today.


Anwar himself acknowledged the reduce number [read The Choice here] and cited the haze as reason but he failed to realised that many protesters left when he started giving his speech. 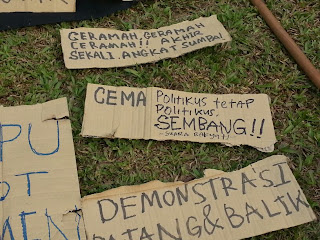 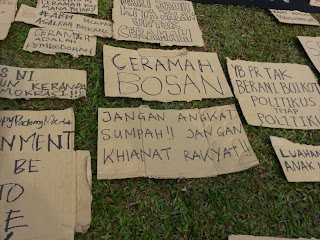 They complained that rally speeches were boring and repetitious. Most realised of the protestors realised that the rally is meaningless if the Pakatan leaders were to swear in today.

While PAS did not support the rally, the party's central committee did not disallow members joining the rally. Few DAP leaders were seen speaking but their members did not join the rally this time after police begin to clamping down on protestors and seditous remarks.


DAP and PAS did not agree to Anwar's call for protest. So does some PKR members. They know it will lead to disqualification.


Since losing the election, Anwar have been trying hard to keep the fire of protest and dissension among Pakatan Rakyat supporters. He called for a protest of the results. Below is his speech at the stadium in Petaling Jaya on May 8th which is more fiery and have content than the one yesterday:


In this speech, he claimed that since Pakatan Rakyat has the popular votes, he justified it to accuse EC has cheated Pakatan of a victory.

The problem is and this has been debunked that this is not a Presidential election but a parliamentary election using the first-past-post system. The party that wins the most number of seats will be the one that rules and choose the Prime Minister.

At a national level, Pakatan may have won but not on a state to state basis. Furthermore, the more popular votes by Pakatan is skewed by few DAP seats getting humongous majority like Theresa Kok's 60,000 majority at Seputeh.

Few days before polling, Anwar cook up a lie to say that some 60,000 Bangla Deshi fake voters were brought in from East Malaysia.

That has caused quite many commotion as Malays, Indian and Indian Muslims descendent Malaysians were harrassed by Pakatan supporters, mostly DAP supporters and with some racist slur expressed.

MAS and Air Asia has denied ferrying any Bangla Deshi. In the first place it is not logical to provide at least 200 flights from East Malaysia with limited number of airplanes available. 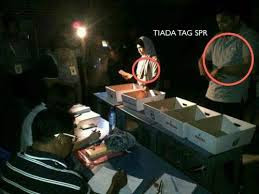 The Red Bean Army then cook up a story that there were blackout during counting at many counting centres.

However, the only proof they could provide was a fake pictures of a blackout supposedly at a poll centre in Selangor. It turns out the picture showed a major flaw of prohibited media photographer seen in the picture and those in the pictures were without EC tags.

A DAP state assemblymen from the said area denied the blackout.

Initially, PKR's Rafizi made a statement that PKR will make a petition for 25 of their lost seats. On the day Suara Keadilan reported 18 petition was made out, a blogger reported only 5 was submitted to the High Couty. [read here]

Anwar will have to dig deep to reinvigorate his supporters. He cannot allow them any time to think but to just blindly follow him. Should they do give a little ponder, they will realise that this is but another of Anwar's 916.

By the end of the first day of parliament. we should be able to see also whether the so-called claim of vote of no confidence by Tengku Razaleigh being spread around by pro-opposition media has any truth also.

Yesterday, Anwar said that the protest will go on. Before yesterday's rally, perhaps realising the rally will not attract much people, Tian Chua denied the rally is a finale.

The question now is what is the relevance of continuing the protest against EC when Anwar swored in this morning? Find some other issues and BN should not be dumb enough to give them new bullets.
at 6/24/2013 02:49:00 PM

Now he can say that it is the rakyat.

This stupid PR, one moment they say they won a popular vote, using figures derived from SPR GE13 results count, and another moment they say the same SPR not being credible, if not credible then why use those their figures in the first place? ... but we all know there are plenty of stupid people who will believe them anyway.

Anwar should resign as Opposition leader.As stated in wikipedia,Anwar said that he would step down from politics if his team did not win the election
http://en.wikipedia.org/wiki/Anwar_Ibrahim#Pakatan_Rakyat_Lost_In_13th_General_Election

By swearing in,he admit that BN won and PR lost,so he should step down.

In order to justify their failure to wrest Putrajaya,they have to fabricate excuses, that is why we hear of so many illogical claims being raised from all directions.