Covering up Nor Yakcop's Renong fraud 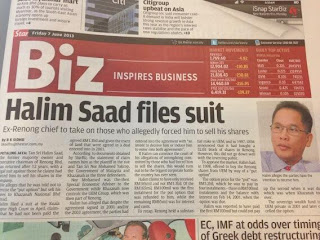 The pro Kalimullah and anti-Tun M people in MI trying to play it down and label Halim as sour.  It is as though the dealmaker, Tan Sri Nor Mohamed Yakcop (no Tun there) outwit Halim in the deal. Forex trader Nor Yakcop did not.

Bernama merely reported Khazanah as acknowledging receipt of the lawsuit. It is rather tame.

It is so obvious that the mainstream media (MSM) are working in concert to cover up for Nor Yakcop and Khazanah and vilifying Halim, who used to have a spoil wunderboy image.

Halim is a name of the past and he does not need to be vilified. He has contributed and delivered something tangible for the country. We believe he had helped to solve problems of and contributed to UMNO.

Not only Nor Yakcop and Khazanah has contributed none, be it as individual or as institution, he and the outfits he was involved destroyed billions and billions and committed frauds.

Nor Yakcop lost US$16 billion in fraudulent forex trading under the guise of active reserve management.

As a result of the lowered reserve and shareholders fund of our central Bank, Bank Negara Malaysia, it attracted British hedge fund traders to take a bite at our ringgit. George Soros came to talk the ringgit down after the Mexican and Thai Baht crisis in late 90s.

Nor Yakcop was with Anwar's boys in Abrar and was involved in a fraud to use Abrar Unit Trust money to finance takeover of Mun Loong Berhad. Anwar covered up for him by giving direction as to not charge him.

The mess that he made to the Bumiputera Commercial and Industrial Community (BCIC) runs in billions and billions in his assignment to restructure of MRCB and development of Khazanah.

He created the deluge of Melayu Liberals indifferent to the plight of the Bumiputera like Abdul Rahman Ahmad and Sharil Ridza Redzuan of Media Prima, Tan Sri Azman Mokhtar of Binafikir and Khazanah, Dato Wahid Omar of then UEM, etc.

He destroyed the Malay corporate players. And along the way, destroyed also Chinese, Indians, etc. Since then, there have been no new corporate entrepreneur in Malaysia!

There is also another great fraud of Nor Yakcop named TERAJU.

The outfit is placed under PEMANDU whose got no interest to carry the Bumiputera agenda. TERAJU is merely to hoodwink the Malays into believing that there is some effort to help the Bumiputeras.

There is actually none and know-nuts CEO, Dato Husni Salleh is only lying to tell TERAJU is doing data collection and analysis.

Husni used the opportunity of his position to belasah usahawan Melayu when he himself acknowledged privately that he is no entrepreneur and know nuts about entrepreneurship.

All the so-called data compilation work is done by PEMANDU. Nor Yakcop's man and failed Venture Capitalist, Husni Salleh only makan gaji buta in the tens of thousand a month. 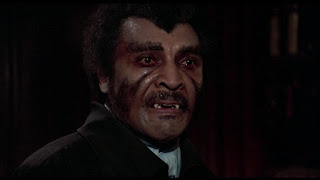 Nor Yakcop is believed to be corrupted and had lined his and his three sons pockets while at MoF and EPU.

OutSyed the Box may have meant Nor Yakcop to be the Dracula in one of his recent posting. [Can't find the link]. A more accurate description could be Blacula.

Does the MSM think that the public can be mislead to believe this former Minister, whose got two of his political secretaries charged by MACC, whether acquited or not, is an honest and trustworthy person?

Rocky Bru twitted yesterday to say it is a case of fraud: 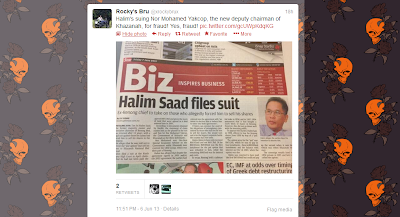 We sense the same.

Nor Yakcop has got fraud written all over his face, hands, body and heart. What makes him not to have committed fraud in the case of Halim?

By B K SIDHU
bksidhu@thestar.com.my

PETALING JAYA: Tan Sri Halim Saad, the former majority owner and executive chairman of Renong Bhd, has returned after 12 years, with a legal suit against those he claims had forced him to sell his shares in the company.

He alleges that he was told not to exercise the “put option” but sell his shares to Khazanah Nasional Bhd instead.

Halim filed a suit at the Kuala Lumpur High Court in April, claiming that he had not been paid the agreed RM1.3bil and given the tracts of land that were agreed in a deal entered into in 2001.

According to documents obtained by StarBiz, the statement of claim names him as the plantiff in the suit and Tan Sri Nor Mohamed Yakcop, the Government of Malaysia and Khazanah as the three defendants.

Nor Mohamed was the-then Special Economic Adviser to the Government while Khazanah now controls the UEM Group, which was then part of Renong.

Halim has alleged that despite the agreement signed in 2001 and/or the 2003 agreement, the parties had entered into the agreement with “an intent to deceive him or induce him to enter into both agreements”.

If Halim can convince the court of his allegations of wrongdoing committed by those who had forced him to sell the shares, this would turn out to be the biggest corporate battle the country has ever seen.

Halim claims to have only received RM165mil and not RM1.3bil. Of the RM165mil, RM100mil was the first instalment for the put option that was refunded to him, while the remaining RM65mil was for interest and costs.

To recap, Renong held a substantial stake in UEM, and in 1997, UEM announced that it had bought a 32.6% block of shares in Renong. However, this did not go down well with the investing public.

To appease the market, Halim had, in 1998, offered to buy the Renong shares from UEM by way of a “put option”.

The option price for the “put” was RM3.2bil, which he was to pay in four instalments three in RM100mil instalments and the balance with interest on Feb 14, 2001, when the option was due.

Halim was reported to have paid the first RM100mil but could not pay up the second when it was due, which was when Khazanah took over.

The sovereign wealth fund took UEM private in 2001 and later cancelled the option.
Halim resigned from the Renong/UEM group in October 2001.

BK Siddhu is an old hand. Remember the case of Securities Commission investigators tried to rough her up and compromised her journalistic integrity but she persisted?

Some lallang bosses or PKR or DAP sympathiser editors inside The Star may try to cover-up but BK Siddhu is a true journalist. Written in fine print in the caption "Halim alleges the parties have intention to deceive him."

If our memory serves us right, Dr Mahathir agreed with Halim something but this Nor Yakcop did something else.

Back then, our market sources used to tell us that Halim was co-erced into selling. With PLUS as subsidiary and listing it in 2005 will be a huge windfall, Halim had no problem raising money to exercise his Put option.

Upon the listing of PLUS, the whole Renong group should be in a steadier footing for overseas foray and all. Our sources back then was recommending us to buy Renong for the long haul. It was going cheap in the midst of the fianncial crisis of 2000.

Many took advantage of the financial crisis albeit in an insidious and dishonest way.

The talk among Merchant Bankers then was that Nor Yakcop and Danaharta people like Tan Sri Azman Yahya was milking out of the whole restructuring of the financial sector.

One of our source then was from within Amanah Merchant bankers where Azman used to be working with.

On one occasion, we saw Azman coming out of Ficus restaurant in old Hilton KL with very an unsavory looking character. We had witness seeing it happens.

The moment Azman left, there was a group of people coming out of the hotel's nearby cigar pub crying out in jubilation with that character. They went back into the pub presumably to hear the details of his lunch and celebrate.

We've got someone to dig up Halim's writ of summon from Khazanah hehehe .... We are looking for the jalan cerita (storyline) in the writ of summon. That is where the meat is.

Otherwise, why would someone who takes care of his kawasan in Tasek Gelugor was not selected to defend his seat?

Halim's writ of summon was heard to have been delivered before announcement of candidate.

Halim's summon is timely because Nor Yakcop was elected Deputy Chairman of Khazanah. By right, he should be powerless because the Chairman is PM.

Strangely, Nor Yakcop replaced Tan Sri Mohd Nor Yusof as Chairman of Executive Committee. This  committee recommends to PM the Chairman, CEO and members of the Board of Directors of GLCs, particularly those under Khazanah.

Lagi masaklah ... because that is a powerful and influential position.


Most of the time, PM have no time to do background check to just chimply sign and agree. More so, if Omar Ong comes nagging and pestering PM that so and so of his gang of Neo Liberals are suitable.

This is why the hands behind MSM are trying to over-up and hide for Nor Yakcop and Khazanah.

Not many will understand what the hell is call or putt options, callable or puttable, AND excersing call or put. There is also a different between the standard options in financial market and in corporate deals.

We will save them from the headache and confusion to just keep the story simple.

Bro.
Halim Saat waited almost 12 years before he finally file a suit against Noor Mohd yaakop and Khazanah and he chose after election because he dont want to embarace Najib and the Govertment.

He selected one of the best QC ,in London to prepare his case.Since this is the fraud case ,there is no time bar.

Khazanah can come out with a statement,they have a strong case against Halim.But morally can you take over somebody assets without paying a cent.This is worst than Pirate of Carribean.

Halim was panic when Noor Yaakop told him,he will get Securities Commision to investigated Halim and board members of UE and Renong.Halim is not alone whenhe met Noor Yaakup,He brought along Rashid Manaf a lawyer from Rashid and Lee.

He want to the agreement with Noor Yaakop in writting but Nor Yaakuo told him,you dont trust me ,I am the economic adviser to PM.

At least you remember Halim who had used his money to bailout UMNO company,Fleet group and PWTC .
He had donated not less than 100 millions to UMNO in every GE since 1984.

Tan Sri Noor Yakop told Halim,Khazanah want to take over his assets because he is an UMNO nominee and all his assets belong To UMNO.

Assuming Khazanah Nasional not belong to UMNO,what did UMNO get from Khazanah.Commissions,shares of profit or Air.?

We must exposed this Tan Sri Noor .
He causes too much damages to UMNO/Malay.

halim kasi taruh sama dia betul2 punya kaw. ini NMY and his support staff are worst than the devil. I want to thank you for taking actions against him. I hope his boys will ve extra careful when doing business with entrepreneur in the future.

Amokh = a mockery to the MCOBA boys.. He tried to emulate the 'college mafia' style and regime of your time but failed miserably.. It's time abang Sr kasi ajar sket adik Jr yang suka tunjuk pandai!